An Affair With My Mother by Caitríona Palmer review: a heartrending story

The shame of birth outside marriage led Caitríona Palmer’s mother to keep her a secret. With this memoir Palmer purges herself of the misery they endured 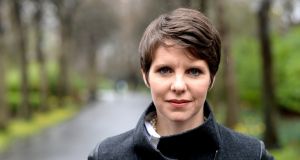 Book Title:
An Affair With My Mother, A story of adoption, secrecy and love

This memoir about an unmarried Irish woman who had a child and what happened to her and that child is simultaneously typical and unique.

An Affair with My Mother: A Story of Adoption, Secrecy and Love begins in Dublin in 1910, when St Patrick’s Guild (motto: “Save the child”) was founded to help unmarried mothers and preserve their reputation by taking their illegitimate babies off their hands. Around the same time an English immigrant, Alfred Palmer, arrived in the city.

In 1914 Alfred enlisted in the British army. He fought in France and returned to Dublin with trench foot. In 1920, in a moment straight out of Graham Greene, he promised to convert to Catholicism if the trench foot went. It did. He converted and thereafter led an Irish life that combined Anglophilia and devout Catholicism.

Liam, Alfred’s son, inherited his father’s values, got a job in Dublin with British Rail and, in 1961, married Mary, with whom he had two children.

At this point the story shifts to a town in the Irish midlands. In July 1971, newly arrived from the west to start her first teaching job, Sarah got pregnant by Tom, with whom she was infatuated. In October 1971 she told him. He pretended not to hear. They never spoke again.

It was impossible for Sarah to stay in town. Pleading a kidney infection, she quit her teaching job and fled to Dublin. A Catholic charity arranged lodgings with a Catholic family, and she contacted the guild to arrange adoption. Fortunately, “having accumulated some savings from her work, she was able to cover the fees charged by the guild”. She gave birth to a girl at the National Maternity Hospital, on Holles Street, on April 19th, 1972.

Two days later the baby was transferred to St Patrick’s Infant Hospital, in Blackrock. Sarah went to her home in the west, where a neighbour deduced from her appearance that she had just given birth and summoned an aunt from Dublin. Sarah’s father was told what had happened (he didn’t speak to his daughter for years), and Sarah was obliged to return to Dublin to lodge with the aunt who’d shopped her, and look for work.

This aunt soon enlightened her niece about her future, now she was damaged goods: “Nobody will ever look at you again. You’re finished,” the aunt said. But Sarah found a job and later married.

Sarah’s baby, meanwhile, remained in Blackrock until the evening of Friday, June 2nd, 1972, when Liam and Mary, who were adopting through St Patrick’s Guild after Mary’s third ectopic pregnancy, collected her.

On February 6th, 1973, at the Adoption Board on Merrion Square, Sarah’s signature having been secured, the adoption was completed. Liam and Mary christened their child Caitríona, and she is the author of this book.

The Palmer house was, the author writes, “an Irish home very much of its time, which is to say that it was not the scene of much genuine emotional intimacy”.

When Caitríona was six Mary told her that she was adopted. The news was traumatic: “That was the day when my identity fractured and a dull emptiness established itself in my gut. I was now two people: the people-pleasing adoptee, ever fearful of being sent back; and the melancholy inner child locked in a quest to locate that missing part of me.”

Caitríona Palmer was a high achiever. The first in her family to attend university (UCD, history and politics), she went to Boston College on a Fulbright scholarship, which in turn led to work in Bosnia with Physicians for Human Rights, which was “overseeing the exhumation of hundreds of mass graves left over after the wars”.

The work was grim, but Palmer adjusted to the putrefying corpses; her problem was the relatives, “those left behind, the families of the missing, racked with madness and grief, searching for their loved ones”.

Her Bosnian experience provoked a crisis to which there was only one solution: she must find her birth mother. Early in 1999 Palmer contacted St Patrick’s Guild. Three weeks later she knew that her birth mother was Sarah (not her real name), that she was married and that she had three children. They met later that year.

Contact established, mother and daughter started meeting. Sarah had never told her husband or children about Caitríona and believed that if she did her family life would end, so she stipulated that she and Palmer meet only in anonymous public places, that their connection never be disclosed and that her private details (home address and so on) remain secret.

For Palmer, who had begun the quest fearing that Sarah “might be dead or – worse – might be unwilling to hear from me”, this was totally unexpected. “The possibility that Sarah had kept my identity a secret had never once crossed my mind.”

Palmer felt she had no alternative but to acquiesce to an unequal arrangement, by which, in her mind, “Sarah was the married lover” and she “her compliant mistress”.

Time passed: Palmer married, had children and continued to meet Sarah in secret. Their arrangement made her increasingly miserable – “Sarah’s secret was feeding a toxic thought that had dogged me my entire life: that I was simply not good enough, that I was undeserving of love: that I was worthless”. She was ever the crowd-pleasing adoptee, however – “when faced with anything unpleasant or negative, I lacked the ability to say how I truly felt” – and she suffered for years until, having discovered from other adoptees who had traced their birth parents that Sarah’s fidelity to omerta was common, she decided to write this book.

She traced her birth father, Tom, who declined contact, and she secretly visited Sarah’s home place. Then Palmer went public (keeping Sarah’s identity secret, as does this book), first in print articles and then on radio, which in turn prompted Sarah to tell two of her children about Palmer. And that’s as far as the story goes.

This is a heart-rending book. It is also a relevant book. The events it describes aren’t in the deep past. They happened in the 1970s. It’s not very long ago.

We can comfort ourselves with the thought that what Sarah and Palmer endured (and this review comes nowhere near conveying their misery) doesn’t happen any more. It doesn’t, but the consequences of what happened continue. Sarah still hasn’t told her husband or third child about Palmer.

Some may feel that to publish is reckless. What if Sarah’s husband now finds out? He might, but I suspect the author’s relationship with Sarah was so toxic that she’s had to purge herself by writing this. I’m glad she has, but, equally, I’m troubled. Very.

Carlo Gébler’s latest books are The Projectionist: The Story of Ernest Gébler and The Wing Orderly’s Tales (New Island)

Is it okay to have children in a time of climate chaos?
Real news has value SUBSCRIBE