Akhil Sharma interview : ‘It was difficult; all books are really hard’ 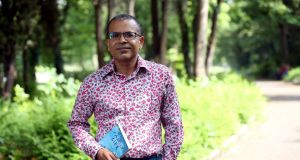 Akhil Sharma has been announced as the winner of the 2016 International Dublin Literary Award. Photograph: Jason Clarke

Wearing the regulation jaunty sports shirt of a lawyer on vacation Akhil Sharma is instant great company. Within about 30 second his friendly irony lifts a stilted encounter in a Dublin beer garden to high comedy.

Admittedly he gives the impression of being capable of giving excellent advice from dry land as some less fortunate person, me, stands up to the neck in water bailing out a submerged dingy. It is not that he is lacking in sympathy - he is sympathetic and personable - but having had experienced hell in his life, is grateful for survival. He insists he is lucky. The only response to that is that he deserves his luck.

Conscious that his second novel Family Life has won him the International Dublin Literary Award just over a year after it also took the Folio Prize, he smiles the smile of a writer who has not forgotten how much effort that book took. “It was difficult; all books are really hard. They each have their own problems.” He speaks about various technical issues and how readers respond. Yet for him with this particular novel there is also the memory of the very real human grief it chronicles.

Family Life has no plot. Although the narrator tells his story with vivid descriptions and with humour, the central character is actually a brother trapped by a destroyed brain. Around his inert body revolve his family, their new lives in America dominated by his complete helplessness. The shocking reality of the extended tragedy Sharma shared with his parents means that it the only possible way to begin the interview is by asking him had he felt relief when his brother died after 30 years in a vegetative state.

“I was relieved but sad, when I saw him after his death, I went to kiss him, I couldn’t stop, couldn’t stop touching him. It was as if a magnetic force kept pulling me down to him. After it all, there I was, not wanting him to go. For a few days after his death, I wanted him to stay, to be there.” But it was an ordeal, all of it. His parents reacted differently throughout. “My father, well…” yet his mother responded heroically. Sharma seems surprised to hear her being described as such. But she did try everything she could to help her injured son. How did his father react to being portrayed as being unable to deal with the tragedy? “He wasn’t able…he fell apart.” Has he read it? Sharma laughs good naturedly. “No, when I asked him if he’d like to read it, all he said was ‘Why? I was there.’ ”

His mother, having initially declined to read the book, then did. “She just said that not all of it was true, I pointed put that it was a novel. My mother has a low opinion of novels.” She had been an economics teacher in Delhi; in the US she worked in a fac tory. He says she never minded. “She accepted this….it is unspoken but it is clear that having had her elder child’s life ruined and then witness her husband retreating into alcoholism, his mother was unlikely to complain about not having her qualifications recognised. Later he refers to his parents as living within their own world. “When I said I was going to Ireland, my mother asked was that a place in Africa.” It doesn’t sound as it may read, his mother’s distraction is what comes across; her response is not about geography.

In conversation the compact Sharma is animated, reminding me of singer/songwriter Paul Simon, and appears paternal in demeanour. He and his lawyer wife don’t have children. “It’s what we decided.” As he writes in the novel, he did work as an investment banker. “It wasn’t for me.” They live in Manhattan and he loves his life “I am surrounded by people I love and who love me” and he makes several allusions to his luck, to having been fortunate. How about survivor’s guilt? “No I don’t have any of that. Who wants to be the dead guy?”

His first novel, An Obedient Father (2000) is shocking and comic, the story is told by Ram Karan, a shady corrupt civil servant who could have swaggered from the pages of Gorky. It is a novel rich is set pieces, some of which had appeared as short stories. Sharma is currently working on a collection. In common with Jhumpa Lahiri he says he is American and if at first it seems disconcerting, it quickly makes sense; his responses always on the polite side of the native New Yorker’s and his pedigree includes Princeton and Stanford.

Precise and analytical by nature, or at least when speaking about writing, Sharma who was born in Delhi and turns 45 next month, sounds like a lawyer but appears to think as a scientist. He teaches creative writing at Rutgers University in Newark. How effective is teaching writing? “You can help talented people get better. There is a magic formula – patience. And also being very honest with yourself.”

He is a thorough reader and is far more interested in asking about books than discussing his work. It is impossible to miss the nuanced way in which he says: “So you liked that book? I wonder what you would say if you went to read it again?” All said so kindly and polite, all one can do is swallow and wish you could sit in on his classes. He loves the classics and praises Austen and Hardy’s Jude the Obscure, Naipaul’s A House for Mr Biswas, yet quick as a flash makes clear his admiration for a contemporary Edmund White “who just seems to do everything so well. It’s somehow, always, so right.”

Everything with Sharma comes back to honesty and he says of Family Life: “I wrote 7,000 pages, it took me more than 12 and half years and I got a 224 page book out of it. Some parts of it are better than my first book (An Obedient Father), some parts are worse…I do agree with you, the first one is the better novel but the second one was written by a better writer.”