A Short History of Brexit by Kevin O’Rourke: erudite and highly readable

An excellent and authoritative exploration of the roads to Brexit, writes Tony Connelly 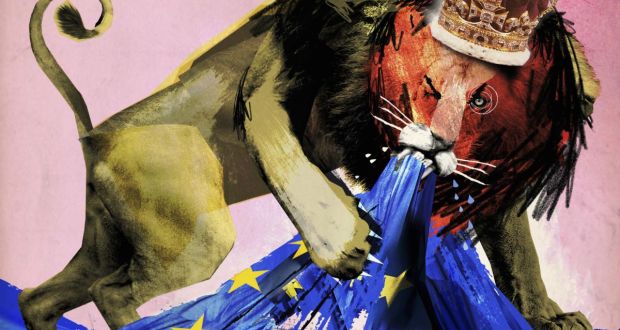 O’Rourke suggests austerity was more instrumental in turning marginalised northern communities against the EU than any groundswell against the free movement per se. Illustration: Getty

The only clarity is that 51.9 per cent voted to leave the EU, while 48.1 per cent voted to remain. Since then a tsunami of doubt and rancour has swept aside that clarity: about what Brexit means, how to deliver it and whether any option has more legitimacy, or common sense, than any of the others.

As such the political space has been consumed by attempts to understand Brexit. It is the British version of Trump; it is a hankering after empire; it is the monstrous offspring of a Tory Party civil war; it signals breakdown of civility fuelled by dubious foreign influence; it is the greatest ever exercise in British democracy.

Crashing into that space is Ireland, an entirely unpredicted variable that has stretched both the negotiations and Anglo-Irish relations to breaking point.

And so, A Short History of Brexit couldn’t have come at a better time.

Kevin O’Rourke is an economic historian (a professor at Alls Souls College in Oxford) specialising in globalisation, war and trade, and where economics fit in. He fixes a penetrating gaze on the strands of Brexit that are important. If Jacob Rees-Mogg frets about the worst Tory split since the 1846 Corn Laws crisis, O’Rourke brings the reader through the complexities of 19th-century trade, protectionism and globalisation. If people argue over the Trump effect, O’Rourke examines whether citizens vote out of rational economic self-interest, are duped by snake-oil politicians or are justified in linking austerity and alienation.

While he brings academic rigour – charts, curves, median lines, the works – and enormous wisdom to bear, O’Rourke is upfront about how “impossible [it is] to write about Brexit completely dispassionately.”

He was born in Switzerland to an Irish father and a Danish mother, growing up in London, Dublin and Brussels (his father was the Ireland’s permanent representative to the EU in the early 1980s).

Being Irish, he admits, “makes it most difficult for me to be dispassionate, since the implications of Brexit for my country are truly alarming.”

There is as decent a primer on Irish history over 50 pages as an outsider could wish for, including some thoughtful observations on Ireland’s economy postwar and the impact of EEC membership.

Contrary to common myths, in the 75 years after 1926, Ireland’s economic performance was “exactly what you would have expected, given Ireland’s initial income level and the tendency of poorer countries to converge on the rich.”

It was only in the 1950s, when equally poor countries like Greece and Portugal improved due to association agreements with the EEC, did Ireland become an outlier. That was exacerbated by its dependence on Britain, which in turn was a poor performer relative to the EEC.

What is so disconcerting reading O’Rourke’s book is the recurring dilemma of geography and empire, and how it still dominates the Brexit debate. As has been well documented, after the second World War, Britain was torn between the Commonwealth, its supposed equal-terms kinship with the US, and a recognition that Europe needed to unify.

Britain demanded the ability to continue giving preferential access to goods from former colonies, but this was incompatible with the nascent EEC. The Six were building not just a free-trade area, but a customs union.

In a free-trade area Britain would have no problem importing New Zealand lamb at a preferential tariff rate, but in a customs union that lamb would face checks once it moved on to the EEC. How a customs union works is, indeed, lost on many Brexiteers today.

Why did Brexit happen? O’O’Rourke starts with the rule of thumb that historians look for contingency – forces that determine the outcome – while social scientists look at chance. As an economic historian, he puts his feet in both camps.

The Tory rebellion of 2011, when 81 MPs voted for an EU referendum, is often seen as a turning point, but O’Rourke looks instead to the economic backdrop. Following the financial crash of 2008, Britain recovered quickly, but it took Europe another decade (O’Rourke is withering about the euro-zone’s insistence on austerity at the wrong point in the economic cycle).

Throw in the refugee crisis in 2014 and it’s easy to see how the Leave campaign could conflate debt and migration to arrive at an easy sell: Europe is screwed, we’re not sticking around.

And yet the UK was not in the euro zone, not bound by its austerity policies, and was not in Schengen, so not a frontline migration state.

“Brexit was unsurprising,” he writes. “But Brexit was not inevitable.”

O’Rourke suggests the austerity of George Osborne and David Cameron was a ruse to shrink the state. That was more instrumental in turning marginalised northern communities against the EU than any groundswell against the free movement per se.

The fact that Boris Johnson could easily have gone to Remain, leaving Nigel Farage as the face of the Leave campaign, meant Remain could have won it. What O’Rourke does not explore is how decades of media vilification of the EU shaped those attitudes that probably meant, when in doubt, voters would default to Leave.

O’Rourke brings the action up to the end of 2018 and Theresa May’s pulling of the meaningful vote. He admits to drawing on existing Brexit literature to cover the negotiations, and he is also clearly frustrated at not knowing the outcome (aren’t we all?).

But this is an excellent and authoritative exploration of the roads to Brexit, one that is erudite, rigorous and highly readable.

Tony Connelly is RTÉ Europe Editor and author of Brexit and Ireland: the Dangers, the Opportunities and the Inside Story of the Irish Response

Paul Weller: ‘I’d hate to think how my health would have been if I hadn’t stopped the drink and drugs’