A North Light by John Hewitt: Poet’s character shines through 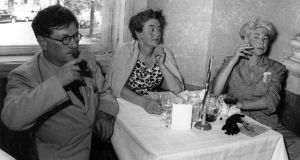 John and Roberta Hewitt with May Morton at the PEN conference, Vienna, 1955

When someone becomes a friend, you have a natural curiosity about their past, about what has made them. My first meeting with John Hewitt was not a success. I was only in my early 20s, but our poems had appeared together on an Austin Clarke Raidió Éireann programme. This I thought had made us confrerès, and so I decided I might call on him at the Ulster Museum where he worked.

Smallish, moustachioed and bespectacled, Hewitt greeted me graciously enough, but his manner was dauntingly taciturn. Yet he took me to the Irish section, where we halted before a portrait by Sir John Lavery of Joseph, Cardinal MacRory, in his red robes.

“He’s a relative of mine,” I said proudly. “His mother’s name was Montague, and they lived along a back road from Glencull School.”

I now know, through this autobiography which has been skilfully compiled by two scholars, that Hewitt’s comment was not an anti-Catholic swipe, but that he really detested the eminently popular Lavery, both his painting style and the man himself: “He was a very small man, clean shaven, with long dark strands of thinning hair brushed back over a long oval skull, with a long sharp nose and two of the tiniest eyes that I have ever seen, deep in little red pits, like a pig’s.”

Or, reviewing the exhibition of a society of which Lavery was president: “The people he paints get exactly the painting they deserve. The Lonsdale portrait looks as if it had been painted by a coachman.” Hewitt then adds insult to injury when he comments that “little Sir John, with his tail-coat and sideburns, always reminded me of such a person”.

I now think these bitchy remarks actually show the intensity of his feeling for art. Hewitt declares it was accidental, but how many young Belfast students were brought by their father to galleries in Bruges and Brussels? And then there was the intervention from another world, when a wise woman spied the child’s future: “I see pencils and brushes and things. This boy’s future will be bound up in Art.”

The young Hewitt seems to have been an eager beaver, though also a Laurentian with a copy of Oscar Wilde’s De Profundis in his pocket. He also had a gift for getting into hot water.

His remarks on Lavery, for example, were greeted with a special chill, since Sir John was at that time what we would now call iconic, as well as having been born in Belfast. And when boys and girls from the Juvenile Training Centre came to the gallery, lingering and giggling in the classical sculpture room, Hewitt felt they should receive a talk on the importance of nudity in art.

The picture he gives of his early gallery days is almost Dickensian: “My first working-corner was a trestle table in the back store.” He got along well with the ordinary workforce, from the nightwatchman to the top-hatted hall porter, perhaps because of his socialist beliefs, and with the solitary Catholic male, of whom he speaks in almost sentimental terms: “Among the work people he was my truest friend.” But “neither the Curator nor his deputy once, in the score of years I served under them, called me by my Christian name”.

Years later, Hewitt was refused the top post at the Ulster Museum because “I was being branded both as Communist and pro Catholic”. He goes on to assert that his “years of gallery experience” as well as his education and other accomplishments “lay outside the reckoning”. I need not retell this story in its grim details (I seem to remember it being published in James Simmons’s Honest Ulsterman), but it is a quite sick-making indictment of the McCarthy-like shenanigans in the North, which brought Hewitt to the verge of suicide. Sent to London on a minor errand as a meagre and insulting consolation prize, he recalls: “Once I stopped at the rail and looked down at the troubled waters sliding, folding over, and turning past, and, for a minute or more, I was nearer suicide than I hope I shall ever be again.”

The Catholics involved were the redoubtable Mary O’Malley of the Lyric Theatre, whom he had yet to meet, and the genial actor-author-manager Joe Tomelty. Of course the granting of posts in the South, not to say all over the world, is swayed by influence and intrigue, but somehow it seemed more grievous in the North because the religious divide was so harsh and patent. Perhaps only some small Soviet republic might have fostered a similar atmosphere.

Yet Hewitt stayed his ground in Belfast, being treated with courtesy by his new boss even though he occupied the position Hewitt had coveted, and only left for Coventry in his own good time. Lingering before his job interview, he found a cafe, surprisingly full of Irish voices. And an old church, with memorial tablets to earlier Hewitts: “I had an odd friendly feeling, as if, in some way, part of me had come home, that I stood in that place with some sort of right, and, from that moment, I knew, in my heart, that I should, later that afternoon, be appointed the Art Director of the Herbert Art Gallery and Museum, Coventry . . .” as if some prophetic magic had struck again.

His time in Coventry and his involvement in the British art scene is another story (although there is a lovely vignette of that English leprechaun, Stanley Spencer). As is his return from exile and prodigal son poetic success in Belfast: I hope both these stories are being hatched.

Hewitt’s early poetry was too restrained, almost costive, No Rebel Word indeed, whereas later Hewitt was perhaps too relaxed. While in the US, I received his Blackstaff Collected for review but, alas, I found it lacking in intensity and felt reluctant to review it for fear of offending an old friend.

Surprising aspects of his character gleam through A North Light. He conveys the excitement of discovering post-war Europe: the paintings of Tintoretto in San Rocco and the war-exhausted splendours of Vienna. But thrawn (or contrary) Ulsterman that he was, he also ventured into a Viennese “cabaret in a garish club with mirrored walls and ceilings, an enlarged version of a Parisian bordello I once visited”.