A Natural review: the agony but not the ecstasy of a sporting life 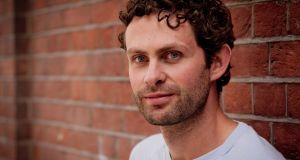 Author Ross Raisin: his novel centres on the moment when dreams of sporting greatness falter into embarrassment. Photograph: Angus Muir

All of the fun seems to go out of sport once it becomes a job. For quiet, introverted young Tom Pearman being a professional soccer player is proving to be more about agony than about ecstasy. Having moved among adult talent as a youngster, he saw his ongoing fairy tale end with his banishment to a lowly club.

This abrupt descent into the real world causes him to lament his glory days as an underage England youth star with a future. “It was not so long ago – school. Everything had been so clear to him then. All he had wanted – to play football – and never a doubt in his mind that he would make it.”

Now it is different. At 19, released from the Premier League academy, which was an exciting and protective privilege, he has become a nervous wreck, terrified of playing, and is almost grateful when he is injured, as it relieves the pressure of having to compete. Performance is all; a player can sense when it is not going well on the pitch, but that is nothing to the stress of hearing a manager’s verbal abuse – and, with it, the threat of being dispatched to another struggling club, not to mention the sneers of your team-mates only too pleased to have a victim to feed off.

A sensitive brooder is our Tom, insecure about everything except soccer, and now even that has let him down.

Ross Raisin’s laboured, dogged third novel centres on the moment when dreams of sporting greatness falter into embarrassment. Tom dreads the phone calls from his kindly father, who has made so many sacrifices yet continues to believe, cheerfully offering his support: “No point in getting down about it. You’re a footballer. Sometimes you’re going to get injured. It’s how you pick yourself back up that matters.”

Initially staying in a hotel while digs with a family are being arranged, Tom had entered a twilight existence of eating, sleeping and discovering a launderette. But there is more to washing clothes then he had anticipated; they have to be dried as well.

It is interesting that Raisin’s athlete is at the beginning rather than the end of a career. There are few more poignant sights in sport than that of an ageing champion. Tom’s plight is different; his sports scholarship had given him only promises, so he has no real memories to sustain him.

In addition to being frustrated about being on the sideline he is anxious and wary by temperament. For the first time in his life, soccer – the very thing that has defined him as a person – is not there to help.

So we sit it out with nervy, secretive Tom as Raisin flat-footedly explores the squalor of soccer’s meat-market approach to players, who exist in a bubble of fear, hope and defiance. The third-person narrative is monotone, the dialogue wooden.

There is none of the linguistic panache of his impressive debut, God’s Own Country, from 2008, in which a demented teenager waged war on life (with admittedly obvious echoes of Pat McCabe’s spectacular third novel, The Butcher Boy, from 1992). It is eerie how much Sam Marsdyke has in common with Francie Brady, although Raison’s anti-hero never quite matched the pathos conveyed by McCabe.

The same could be said of young Tom. As a character he is insufficiently developed, and his irritating plight never reaches the tragic heights, or perhaps depths, that readers aware of the passion, obsession and aspiration that sport inspires will expect.

Raisin applies a forensic attention to detail – the smells, the bawdy, often sexualised psyche-out among team-mates intent on domination – yet he misses the turmoil going on in the mind of any serious athlete.

A team sport does pit one against team-mates when places are there to be fought over, yet every athlete, at any level, must deal with the demons that make you go out and run up a 600m stretch of road 20 times in two sets of 10, with only a five-minute recovery between them.

This is where Raisin fails. He does not address the motivation, the need and the relentless personal compulsions of sport as self-expression. Meekness is one thing. Tom is merely boring.

The most compelling sequences in this wordy, slow-moving, at times tentative and even bloodless novel concern the groundsman Liam, who is the real heart of the narrative. His devoted tending of the pitch is lovingly described. We feel for Liam’s human dilemma. It is impossible to care about Tom.

It is true that managers get more headlines than players and equally indisputable that perhaps a team sport is too communal – and political – to strike at the soul of the drama that is sport. Nowhere does Raisin approach the manic bravura of David Peace’s dazzling The Damned Utd (2006), which charts Brian Clough’s 44-day reign as manager at Leeds in 1974.

In A Natural Raisin relies on the cliched squalor but none of the brazen and intoxicating emotion of why we revere, dream, live and need sport as the expression of something that can move us even more then love and life itself.