Parnell became in 1880 only the third foreigner to address the US Congress, a high point of Irish-American political clout, whose rise and fall is ably documented in this study 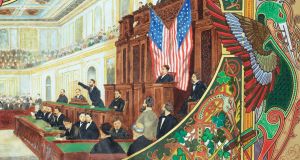 Charles Stewart Parnell addresses a joint session of the US Congress in 1880. For all its significance – and despite the return of famine and violence to beleaguered rural Ireland in the late 1870s – Parnell’s speech was moderate and deferential. He described “the sufferings of the Irish people”, the New York Times reported, and took pains to avoid poisoning relations between the US and Britain

It was a measure of the influence and political power of Irish-Americans that Charles Stewart Parnell was invited to speak to a joint session of the United States Congress in February 1880. The leader of the Irish faction in Parliament was only the third foreigner to address American lawmakers, putting him in the company of a revered Revolutionary war hero, the Marquis de Lafayette.

For all its significance – and despite the return of famine and violence to beleaguered rural Ireland in the late 1870s – Parnell’s speech was moderate and deferential. He described “the sufferings of the Irish people”, the New York Times reported, and took pains to avoid poisoning relations between the US and Britain. He asked Americans only for their moral and financial support for his campaign for land reform in Ireland, confident the weight of American opinion would ensure Irish leaders would no longer “appear as beggars … before the world”. He even scored a meeting with President Rutherford B Hayes.

The address was the culmination of a three-month speaking tour that took Parnell to more than sixty US cities, a public-relations exercise that put Ireland’s plight on the front pages of America’s newspapers. The tour stoked Irish-American nationalism and galvanised support for an end to the archaic land-holding system at the heart of Ireland’s malaise. And, historian Ely Janis argues, it created a “Greater Ireland” that briefly united Irish communities on both sides of the Atlantic in a common cause – freeing tenant farmers from the tyranny of their landlords.

Parnell’s tour led to the establishment of the Irish National Land League of America, an umbrella organisation that attracted an estimated half-million members – one in 10 Americans of Irish heritage or birth. “The idea of a ‘Greater Ireland’ spanning the Atlantic was not merely a rhetorical creation but a cultural and political reality,” Janis, a professor of history at the Massachusetts College of Liberal Arts, asserts in this well-argued scholarly study. “Irish America was coming of age in the 1880s, and Parnell’s visit both coincided with and consolidated the growing assertiveness of Irish Americans.”

Parnell’s stature as the Uncrowned King of Ireland and his American heritage – his grandfather, a rear admiral in the US navy, was hailed as a hero of the War of 1812 – united Irish expatriates as never before.

To middle-class and upwardly mobile Irish-Americans and the Catholic clergy, he brought respectability to the Irish cause. Members of the extremist Clan na Gael, meanwhile, coveted the Land League’s coffers as a possible source of funding for their bombing campaign against British cities. And radical Irish-Americans believed land reform in Ireland would promote equality and boost the labour movement at home. “The cause of the poor in Donegal,” firebrand Patrick Ford wrote in his influential New York newspaper, The Irish World, “is the cause of the factory slave in Fall River.”

The League raised as much as $5 million in the US to help impoverished tenant farmers back home to buy land or avoid eviction for unpaid rent. And the American organisation continued its work after the British government outlawed the League in Ireland in 1881 and jailed its leaders, including Parnell. But Janis argues that internal friction, not British intervention, hobbled the League’s effectiveness in America and hastened its demise in 1883.

A big-tent movement based on such disparate interests was doomed. The British government’s deal to release Parnell from Kilmainham jail in May 1882, in exchange for concessions to help tenant farmers, robbed the Land League of its sense of urgency. The gruesome murders of two British officials in Dublin’s Phoenix Park days later alienated the League’s moderate American supporters. Parnell himself saw the League as little more than a whistle-stop on the journey to his ultimate goal – Home Rule.

Janis explores these strands of Irish-American nationalist support in detail, drawing on a thorough reading of archival and press sources. An “unwieldy coalition” from its inception, he writes, “the Land League eventually collapsed under the weight of ideological and class divisions” .

Its main legacy in America, he found, was to afford Irish-American women a role in public life for the first time. A Ladies Land League, formed in 1880, grew to more than 200 branches and some 17,000 members in the US. This movement, too, was short-lived, but it gave women a chance to demonstrate “their value as partners in serving the holy cause of supporting the homeland”. Janis also credits the League with introducing the boycott to the American labour movement as a tactic to assert workers’ rights. As one New York labour leader declared, “I bless Ireland for St Boycott”.

The “Greater Ireland” movement of the early 1880s opened the hearts and wallets of Irish-Americans who yearned to support their homeland. But distance and internal divisions proved to be its downfall, leaving Ireland to forge its own path to independence.

Dean Jobb is a journalism professor in Halifax, Nova Scotia and the author of Empire of Deception (Algonquin Books), the true story of 1920s Chicago master swindler Leo Koretz