A Darwinian bully under the microscope

In a brilliant novel, Judith Schalansky’s unhappy anti-heroine takes the survival of the fittest to a heartbreaking extreme 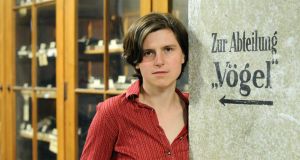 Judith Schalansky: her novel has a beguiling intellectual quality that is extraordinarily German

Most people have a Frau Inge Lohmark lurking somewhere in their memory. Usually a particularly miserable teacher who took pride in never cracking a smile, kept a store of mean-minded putdowns to hand, and could render even interesting subjects dull.

Frau Lohmark appears to be just that: an angry woman at war with the world, unhappy with her life. She views students as enemy aliens. Her only child, a daughter, Claudia, now grown, has gone off to study in California and seems unlikely to return, while Frau Lohmark’s husband, Wolfgang, has become obsessed with ostriches and has taken to breeding them.

This is a brilliant novel: precise, relentless, very funny and unexpectedly powerful. Inge Lohmark, middle-aged and bitter, is trapped in her sardonic and embittered thoughts. Yet she is also quite an interesting teacher, if only because she uses her subject, biology, to inspire terror. She glories in the theory of Darwin and therefore considers life to be a deathly survival of the fittest. She carries this to extremes and will not intervene if a pupil is being bullied. Her reasoning is plain: if you cannot save yourself, you don’t deserve to live.

Most of all she dismisses as pathetic the teachers who attempt to be kind to children. The school is doomed, facing closure in four years. Lohmark teaches the course with a degree of menace, delighting in the episodes of extinction. Only the toughest – those who will show neither mercy nor weakness; people like her – will endure. Yet she misses a vital point: survival depends on an ability to adapt, a skill she has never acquired but needs in a changing Germany.

This is Judith Schalansky’s second novel. “Remarkable” is too small a word. It is very funny, desperately sad and real, and, ultimately, shocking. She has laid the path to the central revelation so well that, although one suspects it, it does take one by surprise. In fact reading The Giraffe’s Neck one realises how often Lorrie Moore labours so hard but fails to achieve the devastating comic effect that Schalansky has mastered with such apparent ease.

The narrative is both blunt and subtle. Frau Lohmark may often think like an assassin, but she is also subject to moments of devastating poetry. She is angry yet heartbroken, and however vicious she is – which is pretty vicious more or less all the time – tiny drops of true pain seep through her hardened hide. When she learns via email that her daughter has married an American, Frau Lohmark is very aware of being unable to speak English.

She sneers at her peculiar old neighbour, Hans, who is always eager to speak. “ ‘I like it when you say my name. It feels good. Doesn’t happen often.’ He narrowed his eyes. ‘You know, nobody talks to anybody. People just don’t talk to each other any more.’ . . . She left him standing there. He was used to it.” Yet she envies him his pet cat, Elizabeth, who loves him.


Wolfgang, who left his first wife and children for Frau Lohmark, difficult as this is to believe, has now found joy and local fame with his ostriches. “Wolfgang didn’t miss Claudia. He was used to not knowing anything about his children. His eldest had signed a document saying that they wanted no further contact with him. He probably wouldn’t have recognised his children in the street. And why would he? They had nothing to say to each other . . . Men were different, in fact. They weren’t bothered about their offspring. They had work and hobbies: computers, cars, parachute jumping, card games, ostriches. Her father always headed to the forest.”

She instructs the pupils to turn over the page on which is pictured a defining fossil. “There it was, the primordial bird, the reptile in feathers, the famous transitional animal, the link between two now-separated classes. With bent legs and spread feathers. Two wings, the neck curving backwards. Flattened, as if someone had driven over it. She had seen it. The one in Berlin, the most famous of all fossils. In the museum. Behind glass. A child had asked, Is that an angel?”

Lohmark is not immune to feeling. Although she keeps the world at a distance it is obvious that she does mourn the absence of her daughter.

There is a beguiling intellectual quality to this wonderful book that is extraordinarily German. It is very unusual to see so many layers of thought emerge through a translation. Shaun Whiteside’s superlative rendition has penetrated close to the very human heart of this novel of ideas and thoughts, observations and emotional pain.

Schalansky’s novel is both simple and complex. It is rich in dazzling images drawn from the natural world and the wayward logic of biology; an artistry sustains it all with flair and intent.

Schalansky, who sees the beauty in natural history, has, admittedly, also been able to look at a culture that has as many layers as an onion. She was born in 1980 and appears balanced between the old and the new, the east and the west. It is also significant that she is from Greifswald, the small Baltic town, formerly in the GDR, which also once produced the great German Romantic Caspar David Friedrich, as well as the writers Rudolf Wilhelm Adolf Ditzen, better known as Hans Fallada, and Wolfgang Koeppen.

In Frau Inge Lohmark, Schalansky has created an anti-heroine who has learned to trust facts, not feeling, yet whose own guilt tracks her. This unhappy teacher, whose car doesn’t even work and whose daughter has fled, wants to take comfort in thinking: “Morality had exactly as little business in biology as it did in politics. As if humans were the only creatures that destroyed their environment. All organisms did. Every species used up space and resources and left waste behind. Every creature deprived another of living space.”

Lohmark gradually begins to see there is rather more to life than the facts on which she so depends. Information so consumes her that she forgets to act as a human, and her most immense failure was in refusing to comfort her own child. That is the crime that stalks her, but the one that undoes her is one she is looking at yet fails to see.

Concise and astute, The Giraffe’s Neck is an elaborate, intriguing thesis that places an everyday bully under a magnifying glass and reveals yet another human who hides from the truth until it hurts too much to ignore it. There is much to praise and to learn from this singular work.