A bank run by schoolkids? What could possibly go wrong? 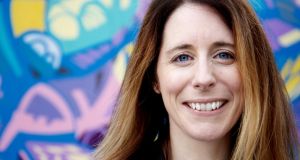 Emma Quigley: 'If you’d asked me back then had the crash left a mark on me, my answer would have been no, not hugely.'

When I was a teenager, my younger brother loaned me a tenner. Plus interest. Considerably high interest. I was a teenager with cash-flow problems. Probably frantic to buy a new checked shirt, or bomber jacket, or some other “must have” ’90s fashion piece. And so began the long-running saga about the infamous tenner. This loan became a regular joke in our family, with jibes about how the interest was building up into quite a costly IOU.

Fast-forward 20-plus years and this is exactly what motivates the teenagers in my book – Bank – to set up a bank. Like my brother, they quickly recognise the advantage of having money in your pocket. And, equally, can sniff out and lure in the poor suckers, desperate for cash.

Like most human endeavours, the teenagers start off with fairly good intentions for the bank. They decide on the need for some banking rules and dabble in a spot of well-meaning self-regulation. They line up a few loan customers, charging albeit extortionate interest rates and quite quickly, the money begins to roll in. Having initially dismissed offering a savings product, believing none of their classmates would be that “loose” with their cash, with the loans side of the bank fully operational, they manage to sell a dubious savings scheme to various sports teams in the school.

The bankers are on a roll, declaring that “everything we touch turns to gold”. So, why stop there? Believing that they can do no wrong, they are tempted into investment opportunities, spotting the potential to hit the big time. They negotiate lucrative investment deals in local enterprises such as a school matchmaking app, and the latest YouTube sensation. They quickly find themselves managing an end-to-end banking solution: loans, savings and investments. Before long, the cash is rolling in and the teenagers realise they are onto a winner. Quick to embrace the rich rewards of capitalism, they start treating themselves to designer gear, new gadgets, new trainers, new threads.

Much like our rogue banks through the boom, the puffed-up bankers start tampering with their own rules. During the Celtic Tiger, the Irish banks were accused of losing the run of themselves. Our teenagers suffer much the same fate. The intoxication of making more and more money is too big a temptation. They go on spending sprees, hammering through their profits with the expectation that the good times would just keep coming. That the money would keep on rolling in. They get cocky and complacent, hedging their bets with riskier and murkier investments, eventually treading on the toes of some unsavoury characters. Then their savings scheme unravels, with the accusation that the savers were mis-sold the schemes. Pretty soon, they are knee deep in it from every angle.

I was in my early 30s when the financial crash hit in 2008 and Ireland had an economic meltdown. I lived in the west of Ireland, an area subsequently hit hard by job losses, businesses going under and empty shop units. If you’d asked me back then had this period left a mark on me, my answer would have been no, not hugely. Sure, I was one of the lucky ones. I had a job. I was permanently employed. I had a roof over my head. I hadn’t got on that perilous housing ladder. But, looking back now, it must have left its mark. Because I started to write this story in 2012, at the tail-end of the crisis.

The book is told through the eyes of Luke, whose parents are struggling financially. The family business is in trouble and his dad spends most days sitting zombie-like in front of the TV, whilst his mam works extra shifts to make ends meet. As the other bankers are splashing their cash, Luke is secretly trying to contribute to the household bills and leaving money discreetly around the house in the hope his worn-out mother will pick it up.

With their vast money piles quickly evaporating, it’s not long before the bank is declaring bankruptcy. A mass organised protest by the victims of the bank’s controversial savings scheme forces the bankers to hand over any remaining cash before they have a revolution on their hands, not to mention an angry school principal. Hand on heart, I just couldn’t let our scurrilous young bankers away with it completely, unlike the bankers and financial wizards who seemed to largely walk away unscathed after the crash.

Despite having to deal with a micro-banking crisis, there is a genuine warmth and humour to the interactions between the members of the teenage gang. My aim was to write a book that celebrates the simultaneous peculiarity and familiarity of male teenage friendship. That world where you say one thing and mean another. Where there are strict rules about what you can admit to your mates. Where everyone slags each other incessantly. Where you are embarrassed to talk to girls. Where you speak your own language. Where someone usually has your back. Or not. Modern teenage male friendship is a theme that is sometimes overlooked in books and on screen (that image of Harry Enfield’s infamous insolent teenager “Kevin” probably springs to mind straightaway!). This is a shame, as it can be a goldmine for entertainment and I found these characters a delight to write.

Ultimately the teenagers end up with no money. But they don’t seem that worse off. They have that resilience that makes me think they are still plotting away at another money-making scheme. Life is a bit dull otherwise. There’s always the hope of making an extra buck.

Funnily enough, my brother never did get his tenner back. He wrote me off as a bad debt (I hope).

Bank by Emma Quigley is published by Little Island Books and is available in all good bookshops and on www.littleisland.ie. It is launched today at 6pm by Eoin Colfer in the Gutter Bookshop, Temple Bar, Dublin.