13 curious facts about Temple Bar: Hell, a bell and a fly’s whiskers 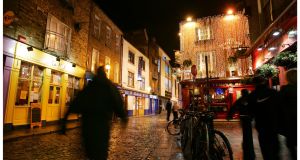 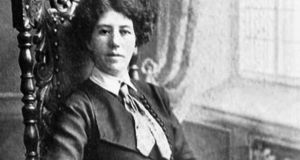 The headquarters of Amnesty International was once the HQ of the Irish Women Workers’ Union, led by Delia Larkin, sister of Jim. The laundry strike of the early 1940s was truly historic as it gave Irish workers for the first time two weeks’ paid holidays. Photograph: IWWU 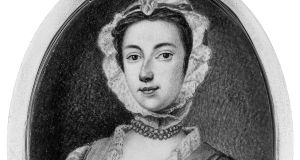 Crow Street Theatre’s Peg Woffington became one of Europe’s greatest actors in the 18th century. It was said of her and David Garrick that she rejected his efforts to direct her, both in plays and in bed. Photograph: Best Antiquarian 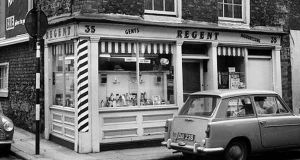 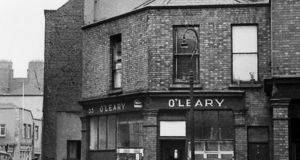 The corner of Essex Street in the early 1970s. Photograph: IHI 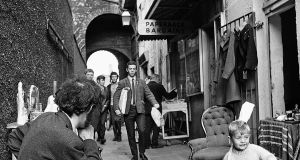 Merchant’s Arch in the 1960s.Photograph: IHI

1. The Gates to Hell

Hell is shown on Rocque’s Map of Dublin for 1756 and links Fishamble Street to St Michael’s Hill and running through the south-facing front of Christ Church Cathedral. The name derived from a tavern in the crypt of the cathedral, called Hell. Hell and its immediate environs gave us the Hellfire Club and notorious individuals including Darkey Kelly, Copper-faced Jack, the Sham Squire, Buck Whaley and Mother Bungy, famous brothel madam. Pimping Peg, in the same business, but with richer clients including lord lieutenants and bankers, had links with Hell. Fishamble Street was home to James Clarence Mangan who gave us My Dark Rosaleen. Jonathan Swift had many of his most important works published in the vicinity, including his infamous Drapier’s Letters. See also the hidden statue of GF Handel like you’ve never seen him!

2. Vampires and the Invisible Prince

The Evening Mail was published at the red-bricked building on the corner of Parliament Street and Cork Hill from the 1820s until the early 1960s, making it Dublin’s longest-running newspaper. Two quite extraordinary individuals served their apprenticeships there: Joseph Sheridan Le Fanu and Bram Stoker. The former, known as Dublin’s Invisible Prince, gave us Gothic horror at its best in the 1860s and 1870s and introduced us to a vampire, Carmilla. It was Bram Stoker who took this genre to new levels and gave us Count Dracula.

The Sunlight Chambers on the corner of Parliament Street and Essex Quay is a most beautiful building illustrating the history of washing. Charles Lever of Lever Brothers, who gave us Sunlight Soap, was a very shrewd businessman and way ahead of his contemporaries in terms of understanding advertising. Other entrepreneurs on this street included James Read of Read’s Cutlers and Sword Makers, where you could buy the world’s largest penknife with 576 blades or a scissors small enough to trim a fly’s whiskers. Lundy Foot had his snuff and tobacco business at Essex Quay with 1760 still intact high up on this remarkable building. He made his fortune when a fire in the building damaged stock, which he still sold. His customers preferred the singed versions. The Fenian Rising of 1867 was planned at No 12, whilst a few doors down, General Thomas Russell, one of the leaders of 1798 was arrested. He was known as “the man from God knows where”. One of his fellow United Irishmen, William Drennan, who lived around the corner on Dame Street, coined the expression, The Emerald Isle.

Linking the Ha’penny Bridge to Crown Alley, Merchant’s Arch is a wonder when you stand back and look at its proportions, shapes and bricks. Pop into the bar there and look to the stars for you will see a hidden treasure – a wonderful museum extending up three floors and surrounding a magnificent cantilevered staircase.

Ramble up and down Anglesea Street and gaze at the amazing Queen Anne shopfronts. One has inscripted in Latin: Judge Us by Our Actions. The Irish Stock Exchange near by is where Oonagh Keogh made history in 1925 by becoming the first woman in the world to be admitted to a stock exchange.

This bell hidden high above the back wall of the Smock Alley Theatre is symbolic of so much in Temple Bar – the freedom to be creative. It has a crack in its side caused by being whacked by the Liberator, Daniel O’Connell. The theatre is one of Ireland’s greatest and most historic theatres. The Smock gave us Oliver Goldsmith’s She Stoops to Conquer, but a famous actress of the Crow Street Theatre, one Peg Woffington, never stooped to conquer, and became one of Europe’s greatest actors in the 18th century. It was said of her and David Garrick, that she rejected his efforts to direct her, both in plays and in bed.

Eustace Street gives you many of those “what a street” feelings and is truly awe-inspiring. Explore inside No 25 and tap on the panelled walls and bring yourself back through the corridors of time to the 1730s. The Shamrock Chambers, the Quakers, the Irish Film Institute and the Ark are all located here. Take in the vista to the Millennium Bridge at one end and Burton’s Tailors at the other and the Granary Building with its four loading-bay doors in front of you. Nearby is the Green Building, one of many splendid modern architectural set pieces in Temple Bar. Its doors are made from what appears to be recycled bicycles, sinks and lead pipes. Wow! The rooftop of Spranger’s Yard, at the Fowne’s Street junction with Crow Street, will intrigue one with its tentacled homage to the imagination of Salvador Dali.

8. Delia Larkin and the Palace

Fleet Street gives us treasures in abundance. Start or finish in the Palace Bar. One of a kind with its décor, timber, history and ambience – the very centre of the universe for Dublin’s literati from the 1930s until the 1980s. Four inspiring plaques on the ground outside, dedicated to Brendan Behan, Con Houlihan, Patrick Kavanagh and Flann O’Brien. Across the street in the HQ of Amnesty International was the headquarters of the Irish Women Workers’ Union, led by Delia Larkin, sister of Jim. The Laundry Strike of the early 1940s was truly historic as it gave Irish workers for the first time two weeks’ paid holidays. Fleet Street is also the birthplace of Kevin Barry, who at the age of 18 gave his life for Irish freedom. Around the corner explore the hidden alleyways of Temple Bar by taking the Icon Walk.

9. The Dolphin and the Custom House

Today’s Family Courts service occupies a building that was the magnificent former Dolphin Hotel on the corner of Crane Lane and Essex Street East. The Gothic entrance is crowned with a gilded dolphin and two maritime mythological figures. The name Michael Nugent is carved near the entrance. Across the road, the Clarence Hotel is located on the site of Dublin’s Custom House in the 18th century before it moved downstream to its present location.

Once home to Ireland’s richest man, Richard Boyle, Earl of Cork, who inspired Oliver Cromwell’s To Hell or to Connaught policy. His son, Robert, is often regarded as being the father of modern chemistry. The external wall of the Rates Office is an optical illusion. Look closer at the garlands above the centre. Different colours – different eras.

Some of Ireland’s finest Venetian architecture is to be found on both sides of Dame Street and College Green. Look at the building on the corner of Fownes Street Upper and Dame Street. Ramble into the AIB opposite the Olympia or visit the exquisite Bank restaurant.

12. Our Union only in Truth

Our Union only in Truth over the Temple Bar Gallery and Studios is, like the co-op below, just one of those aspects of Temple Bar that throws delightful questions at you all the time. Like, how such wonderful small businesses can survive and thrive eg the Regent Barber, Rory’s Fishing Tackle Shop, Powell’s and Fogarty’s Locksmiths’, Cooke’s Silver, La Caverna with its 300-year old vaulted basement, and the Waldorf Barbers, cutting hair since the 1940s.

Idler’s Corner is in Meeting House Square near the steel curtain of the Ark and before exiting through the tunnel to Eustace Street. Try this for the best free massage in Dublin. You only need to wriggle! Oh! and by the way! Pop along to Foster Place and look up towards the roof of the Armoury Building to see the cannon. Finally, fly into the House of Lords room of the former Irish Houses of Parliament building, next door, to see the huge hanging tapestries of the Battle of the Boyne and the Siege of Derry. They were made in World End’s Lane, here in Temple Bar.

Temple Bar: A History by Maurice Curtis is published by The History Press Ireland, at €17.99