Why did van Gogh cut off his ear? New evidence emerges 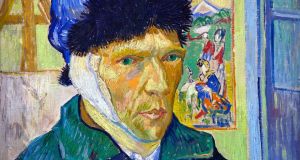 It is the most famous act of self-mutilation in the history of art, but the exact motivation – love? Jealousy? Rage? – for Vincent van Gogh’s decision to cut off his ear has remained unknown for more than a century.

According to a new study of his time in Provence, the gruesome procedure was in fact inspired by the news his brother Theo, his most loyal confidant and financial supporter, was about to marry after a whirlwind romance. The research throws doubt on the popular theory that Van Gogh took a razor to his ear after a passionate row with fellow artist Paul Gauguin.

It was known that Van Gogh was distressed by news of the marriage – which could have threatened the closeness of their relationship, and also left Theo with a wife and family to support, unable to fund a struggling brother who had yet to sell a single canvas – but it had been thought that he learned of it only after the incident.

However, the writer Martin Bailey, for his new book Studio of the South, has uncovered evidence that Van Gogh almost certainly learned of it in a letter from Theo delivered on Sunday 23rd December 1888.

Later that night there was indeed a quarrel, after the two artists had spent the day working penned up together by continuous rain, and Gauguin would leave the house threatening to return to Paris – but the trigger for Van Gogh’s despair was not that, but the news from his brother, Bailey believes.

Theo’s letter enclosed 100 francs, but also the news that only a fortnight earlier he had met an old friend, Jo Bonger, who had previously turned him down. This time, within a week, she had agreed to marry him.

Bailey has established that Theo had already written to his mother asking permission to marry, and that Jo had written to her older brother, who responded with a telegram of congratulations that arrived on 23rd December. Bailey is sure that Theo would have written to his brother at the same time, and that the news was in the letter that was delivered to the famous Yellow House at Arles, also on the 23rd.

Another recent book, by Bernadette Murphy, suggested that this was not a prostitute, but a local farmer’s daughter working there as a servant. Murphy also uncovered a drawing, made by a doctor long after the event, suggesting that Van Gogh had cut the entire ear off, and not just the lobe. In any event, the poor woman opened the parcel, fainted on the spot, Van Gogh fled, and the police were called.

Gauguin returned to the house the following morning, Christmas Eve, where he found the police on the doorstep, and the artist lying in his blood-soaked bed. Theo, who had been hoping to spend a first Christmas with his fiancée, arrived on Christmas Day to visit his brother in hospital. Van Gogh – after briefly being locked in an isolation room – was discharged on 7th January, and wrote to Theo: “Soon the fine days will come and I’ll start on the orchards in blossom again.” Despite a further collapse and another spell in hospital, he continued to paint until he left Arles in April.

The paintings from this desperate period in his life are among his best loved, and Bailey has also traced the surprising afterlife of the bed in his famous The Bedroom. It was one of two double beds bought when he was furnishing the rented house to welcome Gauguin, and Bailey touchingly suggests: “The twin pillows in the painting suggest that he still had a lingering hope that he might eventually share his bed with a woman.”

In 1890, Van Gogh had the bed sent by rail to Auvers, north of Paris, where he created the last works before his suicide in July. Theo died the following year, and his widow inherited the bed and used it in a small guesthouse she ran in the Netherlands. There was talk of returning it to a museum in the Yellow House, but the building was destroyed in the second world war, and the bed was instead donated by his nephew to an appeal for furniture to help villagers whose homes had been destroyed. Bailey has been unable to trace it further, but speculates that the sturdy wooden bed could still be out there somewhere, unrecognised.

Van Gogh is now one of the best known artists in the world, but it is a measure of how obscure he was in the 1880s that of the four contemporary newspaper accounts of the ear mutilation that Bailey has traced, two spelled his name wrong, and a third, which reported that he was “suffering cruelly” from the injury, described him as Polish – “peintre de nationalité polonaise”.