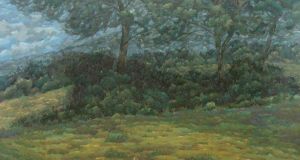 A French landscape by the late Hilton Miller, a beautifully poised composition in the classical manner 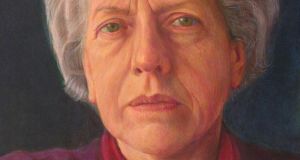 A self-portrait by Benita Stoney – the careful, meticulous precision of her close-up portraits recall the almost frightening clarity and detail of Lucian Freud

Curator Alice Lyons plays with our expectations in titling her current exhibition at The Dock Emerging Artists . Rather than the youthful profile the term suggests, the show’s four participants turned to art in a serious way relatively late. They are emerging in the conventional sense, but decades later than one might expect.

Yet even a cursory glance at their work will confirm that none of them is what might be termed a purely recreational artist or a hobbyist. They each engage with their medium of choice with a searching, exploratory, challenging spirit.

The eldest exhibitor, Zofia Malanowska, was born in central Poland in 1915. She married quite young and had two children. Then, in 1939 her husband, Wladyslaw, was drafted into the Polish army. He was killed fighting in Burgundy, in France, the following year.

As it happened, Malanowska’s cousin, George Wolff, was an established painter and critic, and during the war years he taught her how to paint in watercolour and tempera.

The work she produced at the time was lost in the turmoil of the closing stages of the war. In any case, she began to work as an accountant and between that and parenting, in difficult enough circumstances, she had no opportunity to pursue art. Until, that is, many years later when she became interested in weaving.

From the early 1970s, she began to explore embroidery and, as she puts it, she has “remained faithful to it for more than 40 years now,” and still devotes several hours a day to it.

Rather than approaching it as a decorative form with its own set rules and parameters, she treats it as an expressive, representational medium. And in that respect, she’s a virtuoso.

The mostly miniature compositions she creates, based on the world around her and memories of past experiences and places, are exceptional. Her use of colour, texture, pattern and imagery is both practised and inspired. Embroidery is a slow process but she manages to infuse it with real spontaneity, and there’s a wonderfully flowing, lyrical quality to her work.

Sadly, another exhibitor, Hilton Miller, died last year while the exhibition was still at the planning stage.

The father of artist Nick Miller, he was not known as an artist until late in life, but he had for many years dedicated himself to painting.

Born in 1931, he trained as a mathematician and began his working life as an academic statistician in London, producing a standard textbook on stochastic process or, as it is also known, random process – which is intriguing, given his interest in the intuitive practice of painting and, in his case, painting landscapes, which involves imposing order on the chaos of nature.

His landscapes, made in France and rural Ireland, are beautifully poised compositions in the classical manner. They look like pictures that would be very good to live with.

The calculation involved is evident from the incredibly detailed charts and diagrams on palettes and colour-mixing exhibited alongside the finished paintings. Presumably he never thought of them as art, but they are, surely, and it’s entirely appropriate that they are on view.

Built from dense networks of interlocking brush strokes, the paintings are poised, elegant and serene. They have a timeless quality.

One might expect them to be overly calculated, but Miller’s interest in stochastic process obviously equipped him to allow for the incalculable, unpredictable element that makes a good painting endlessly interesting to the eye, and his paintings are.

As another artist, Benita Stoney, puts it: “For me it was always either words or paint. But the words took over.”

While she made a career of writing, she felt drawn back to painting. Though landscape painting sustained her through difficult periods, it gradually lost its appeal and, embarking as a mature student on a fine art degree, she found her way to portraiture. She cites two major influences: Lucian Freud’s 2002 retrospective and the work of the early Flemish painters in the museums of Brussels.

The careful, meticulous precision of her close-up portraits recall the almost frightening clarity and detail of Freud prior to the 1960s. Her ability has opened up a new world to her and besides participating in many highly regarded group shows, including the BP Portrait Award exhibition, she’s won awards in London and at the RHA annual exhibition in Dublin.

Renata Mooney stands apart to some extent in that she exemplifies pure, unmediated expression. Her paintings snatch dreamlike, symbolic images from the rush of everyday life. There’s a really admirable boldness and audacity to them, a willingness to dispense with pictorial nicety and just tell it as she sees it.

Full of surprises and charged with independence of vision, Emerging Artists is a salutary reminder that we stand to lose a lot if we pander to a culture that prioritises youth at the expense of all else.

Helpfully timed to coincide with The Dock’s show, the Hamilton gallery in Sligo features Nick Miller’s Truckscapes , landscapes of the northwest painted from the vantage point of a mobile truck studio. They begin with the fantastically tangled vegetation and growth close to Lough Arrow, where Miller lived for many years, and culminate with expansive views of the sea and, in the distance, Ben Bulben, from Rosses Point, close to his current studio.

It’s immediately noticeable that Miller – the younger – embraces the unruly exuberance of nature. He manages to capture the feeling of profligate, excessive growth on scales from the micro to the macro, in the Irish countryside. You can positively feel the relative humidity, the endless sprouting of everything and, if you are familiar at all with rural Ireland, you will recognise it.


Emerging Artists is at The Dock,
Carrick-on-Shannon, until June 14th, thedock.ie. Nick Miller is at the Hamilton Gallery, 4 Castle Street, Sligo until
June 1st, hamiltongallery.ie

Covid-19 and dementia: ‘My father studies me, as if trying to put together a difficult jigsaw’
6