Visual art round-up: How to capture an image of a black hole

Grace Weir’s latest films focus on her interest in science 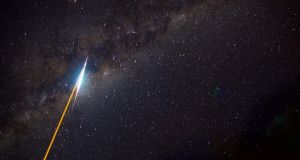 Black Square (still) by Grace Weir. Courtesy of the artist 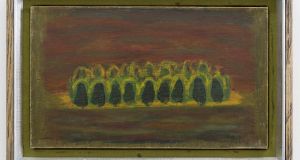 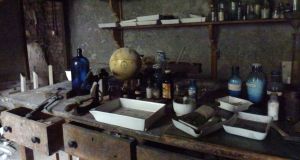 Darkroom by Grace Weir. Courtesy of the artist

Artists who work with video and film ask a lot of their audience. Visit Grace Weir’s 3 Different Nights, Recurring and you’ll find yourself faced with a video marathon. Do you follow the reported example of the Venice Biennale prize jury and spend a maximum of three or four minutes with each piece, trusting that you’ll get the flavour of what’s going on in that time? Or do you buckle up and trust that Weir will keep her part of the bargain?

Although there is usually a notional linear logic to her video works, they don’t really exhibit a forward narrative drive. Some are comparatively brief, several much longer. All tend to circle their subjects at a leisurely pace, asking questions, offering ideas and making connections, but in a deliberately open-ended way. Weir is exceptionally interested in particular areas of science. Her interest has its roots in our immediate, personal experience of time and the mechanics of perception, which has led her to look at the practice of scientific research, in physics and astronomy, and the history of science with particular regard to the role of women in the development of science and technology.

The first and last works you encounter in her show exemplify these two strands of inquiry. Black Square considers how to go about capturing an image of a black hole, from which nothing, including light, can escape and is therefore, one assumes, as close to invisibility as one can imagine. Weir and her crew accompanied astrophysicist Reinhard Genzel’s team as they travelled across Chile’s Atacama desert to work on Cerro Paranal’s telescope as part of their 16-year project to pin down the black hole at the centre of the Milky Way.

Weir asks them how they aim to picture the invisible. The answer, as anyone who has seen documentary programmes on the subject will know, is that the existence of the black hole can be deduced from its gravitational effects on everything around it, and the brief, spectacular flowering of objects that are about to disappear into its maw. It is possible that Weir underestimates the extent to which black holes have entered general cultural consciousness. But her account of the detailed, often tedious work of the astrophysicists, and the question of visualising the unseeable, is consistently engaging. Genzel’s team comes across as being a pretty cool bunch of smart people doing valuable work. So much so that one wishes the film was more about them than it is.

The show’s last work, A Reflection on Light, stems from Weir’s residency in the school of physics at Trinity College Dublin. There she came upon Mainie Jellett’s painting Let There Be Light, the springboard for an elegiac meditation on time and the congruity of artistic and scientific speculation: Jellett’s grandfather was a physicist. In the film’s most atmospheric section, shot in the carefully preserved drawing room of Jellett’s house on Fitzwilliam Square, Weir leads us into a labyrinth of connections via the interior and family photographs.

The emotional complexity and warmth of A Reflection on Light – also evident in a more peripheral way in Black Square and Darkroom – are enriching in a body of work that can at times appear too drily theoretical. Still, this is a welcome survey that confirms the substance of her achievement, and her films easily bear comparison with some significant precursors, especially Canadian artist and film-maker Michael Snow’s landmark experimental films Wavelength and La Région Centrale.

Selected by Merlin James, whose ‘Meeting at the Building’ is in Gallery 2

Caution is advised when a hitherto obscure artist is rediscovered and hailed as an overlooked major talent. It can be that someone, somewhere, has an eye on the market. In the case of the long-neglected Franco-Russian Serge Charchoune, the interest is not mercenary but comes from the notably independent-minded artist, writer and curator Merlin James, who has long been a champion. One can see how Charchoune’s idiosyncratic, eclectic, lo-fi approach would appeal to an artist whose own work could be similarly described (you can see for yourself in James’s small but intriguing show in Gallery 2).

Charchoune was born in 1889 and lived until 1975. He was in Paris during its modernist heyday but remained a marginal artistic figure. Material success eluded him, but he worked consistently and intently throughout his life. Rather than being subsumed into any movement, Charchoune asks what it has to offer him.

His interest in synaesthesia is strongly evident in a number of colourful, patterned abstract compositions linked to specific pieces of music. Other long-term concerns reportedly included writing – he wrote a great deal – and Rosicrucianism, which is a combination of religious and occult beliefs and practices. Many of the paintings on view have the quality of studies or trial pieces, but they are carefully signed and dated as finished works. Occasionally he comes up with a real gem: his deep black Nocturne, the magical Foule Immobile and his muted, more representational pieces. He is certainly an estimable, interesting artist.