The inaugural Hennessy Portrait Prize has been awarded to Nick Miller for his painting of the late Barrie Cooke, who died earlier this year. An exhibition of his winning work and that by the eleven other finalists chosen for the Hennessy Portrait Prize 2014 currently runs at the National Gallery of Ireland. Video: Bryan O'Brien 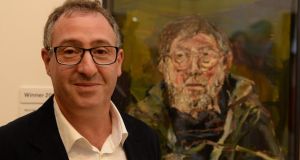 The inaugural Hennessy Portrait Prize has been awarded to Sligo-based painter Nick Miller. He was selected from a shortlist of 12 for his painting Last Sitting, a portrait of the late Barrie Cooke, who died earlier this year.

The two artists were neighbours for many years in rural Co Sligo and were good friends. “There was an awareness during this last sitting,” Miller said of the painting, “that the end of his road was approaching.”

Nonetheless Cooke teased the painter about the unresolved background, whereupon Miller handed him a brush to set it right.

Miller, who was born in London and but who has been based in Ireland since 1984, is well known for the energy of his drawings and paintings based on the human figure and the Irish landscape.

His figurative work centres on the shared experience of the artist and the sitter. It is being true to this lived encounter, rather than a conventional likeness, that is important to him.

His intense working process has been documented several times on film, including his painting of journalist and writer John Waters.

The winner of the prize, instituted by Hennessy and the National Gallery of Ireland, receives €15,000 plus a commission worth €5,000 to produce a portrait of an Irish sitter.

The shortlist also features photography and video. For her series Breaking Point, Erin Quinn photographed subjects as they surfaced for air having held their breath under water.

Mandy O’Neill photographed pupils at a primary school in Cabra, Dublin and Hugh O’Conor photographed Bekah, a woman he saw at Dublin Airport. John Beattie’s video is a study of artist Thomas Ryan and his studio, while Saoirse Wall addresses issues of seeing and being seen in the age of the internet.

Gavan McCullough was also shortlisted. He is a self-taught artist who, after completing his degree, spent two years in Italy.

When the judges reviewed images of the entries, they were not given the names of the artists to make the process as anonymous as possible.

Mr Rainbird said that as the National Gallery housed the State collection of portraiture, it was appropriate that it encouraged the practice in contemporary art,. The shortlisted works can be seen in an exhibition at the National Gallery of Ireland until February 8th, 2015

Gawping at other Irish people’s houses. It’s who we are
6