Questions over authenticity of Russborough painting 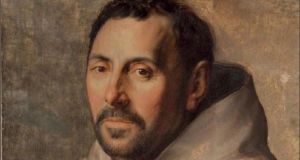 The Monk from the Beit Collection, which was granted an export licence and shipped to London, but apparently rejected by Christie’s auctioneers.

Doubts have been expressed about the authenticity of one of the three paintings by Rubens from the Alfred Beit Collection at Russborough House.

In March, three paintings believed to be by Rubens – a 17th-century “Old Master” Dutch painter – were granted export licences and shipped abroad by the Alfred Beit Foundation to be sold to raise funds for the upkeep of the stately home in Co Wicklow.

Two of the Rubens paintings, Venus Supplicating Jupiter and Head of a Bearded Man, have been accepted by Christie’s for auction in July and assigned a combined top estimate of more than €6.5 million.

But the third, The Monk, was apparently rejected by Christie’s and is returning to Ireland.

A spokeswoman for Christie’s said they could only comment on paintings that have been consigned to auction, and The Monk was not.

The Alfred Beit Foundation said last week it “had decided not to sell this work and it will return to Ireland” but declined to explain why. The foundation was not available to comment yesterday.

Sir Alfred Beit inherited his world-class art collection – and a diamond- and gold-mining fortune – from his father and uncle. He himself believed that The Monk was by Rubens.

However, a leading Irish expert on the Dutch Old Masters, Dr John Loughman of UCD’s School of Art History, said there was no reference to this painting in the “extensive literature on Rubens”.

He said the other two Russborough Rubens paintings were well-known but “no one knows this painting”.

The casting of doubt over the authenticity of the painting to Rubens will shock the art world as the Beit Collection has long been regarded as one of the best in the world and, Dr Loughman said, the Beits had “bought the best”.

Rubens did paint a number of portraits of monks including a famous painting of a Franciscan which hangs in the Hermitage Museum in St Petersburg.

Whatever about its authenticity, The Monk has had a colourful history. The painting was stolen from Russborough House on three separate occasions – in 1974, 1986 and 2002 – and later recovered. For security reasons it has since been kept in storage.