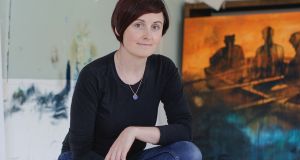 Looking for the silver linings of lockdown has become a popular pastime in recent months. Most of us are digging deep to unearth even muddy gains to counteract a year that’s been peppered by multiple losses. Irish artists, meanwhile, have also had their heads down, but for very different reasons. It turns out that since the pandemic hit early last year, many have experienced a significant upsurge in interest in their work, and this interest is translating into solid sales.

Mayo-based visual artist Tracy Sweeney has had “a phenomenal year” despite last exhibiting her work in December 2019 in Connecticut. When I spoke to her recently, she explained: “The majority of my work would have sold to European and US clients pre-pandemic,” she says, “but all of a sudden, everything is going to Dublin. I’ve seen a massive increase in Irish customers.” For the first time, she explains, Ireland is her best-selling market, followed by London, US, Sweden, Canada and Hong Kong.

London-based abstract artist Aisling Drennan has been enjoying the same heightened interest in her art. The Co Clare native, who was once a member of the Riverdance troupe and whose mother, Doreen Drennan, is a respected artist, has seen a surge in traffic across her website and social channels since early 2020, all from Irish buyers. This has led to an increase in sales of about 30 per cent. Both artists are convinced that conversations about Zoom backdrops and Instagram-worthy home offices are driving a renewed interest – obsession perhaps – with our interior spaces and how they look, to others as much as to ourselves.

Interior designer Deirdre Whelan, an associate at Scott Tallon Walker and a former judge on RTÉ’s Home of the Year, agrees the working from home culture prompted by the pandemic has inspired people to look more closely at their interiors, and how they serve their new lifestyles. She’s also noticed that the drive to support local is benefiting Irish artists as much as local butchers and bakers. “In the most recent residential project I worked on, the owner chose to include only Irish art,” she says.

Annie Fletcher, director of Imma, says that artists’ editions have been “flying out the door” of the museum’s shop in the past 12 months, and she agrees there’s a definite strength of feeling around supporting local culture. “Here at Imma, our focus too over the past few months has been to buy as much Irish art as possible with the Government grant given to us and the Crawford Gallery last October. The Arts Council is also collecting more this year. There’s certainly been an increase in activity this past 12 months,” she observes.

Drennan makes a good point that, “culturally, we like to support our own”. However, both she and Sweeney also believe there’s a hierarchical shift happening in the art world that is encouraging new customers. Since art galleries were forced to close, along with other retail and recreational resources, both artists have increased their activity on Instagram hugely and garnered a new audience as a result. Drennan has begun filming Wednesday night “check-ins” during which she talks viewers through the process behind the piece of art she’s working on. She explains: “On Instagram, people can get to know me, the artist, and the kind of work I create. Traditionally many people have been intimidated by abstract art, so this demystifies the genre a little. “Barriers are being broken down,” she says. Similarly last year, Sweeney began documenting the processes and stories behind her art on social media. Almost immediately, she received a slew of requests for commissioned work, while direct sales from her website have risen by a massive 60-70 per cent in the past 12 months.

Fletcher agrees that “social media is helping”. She adds that galleries are extremely important in supporting Irish artists, but not all have representation, “and these artists need to be able to show their work and sustain themselves too. We’re all our own executives these days. I think it’s fantastic that there’s more varied access to art”. She cites Irish artist Genieve Figgis who has built a substantial following on Instagram and garnered international success as a result. Figgis was discovered by Imma’s head of exhibitions and chief curator Rachel Thomas on that platform and was subsequently included in the museum’s 2019 exhibition Desire: A Revision from the 20th Century to the Digital Age.

Sweeney believes that Irish buyers like to make a personal connection with an artist. Social media facilitates this. “We’re all at home all of the time right now. People are spending more time on their phones and laptops, and there’s a certain escapism in watching the process of making art on YouTube or Instagram.” Drennan adds that, “Irish people like to chat, so when there’s an opportunity to engage directly with an artist, that’s very appealing to them. It also creates a kind of ‘user experience’ for the customer”, she explains “which maybe wasn’t explored as much before the pandemic”.

Those who have maintained a secure income over the past year have more disposable cash, and they’re looking for ways to enjoy and invest that money. A mother of two, Sweeney is thrilled that more customers are commissioning original work, often coming to her with a specific budget, size or colour palette. “They understand that a piece of art tells a story, and they want their own story articulated,” she explains. Drennan reveals that her customers describe their original works as wonderful “conversation starters”. With small talk feeling stale and sour as we sit tight in our tiny bubbles, the art on our walls, just like the books on our shelves, offer an overture to chat and exchange ideas about something other than infection rates and vaccine rollouts.

Both Sweeney and Drennan list prices on their websites and both believe that this kind of visibility has opened up their art to customers who might have assumed it was financially out of reach. For an inexperienced art enthusiast, navigating the issue of price in a gallery can be tricky. Prices are rarely on display and although there is sometimes a pamphlet available with listings, if you’re a novice goer you may not realise this, and which one of us wouldn’t feel a little uncouth asking about price in the noble surroundings of the Kerlin or Taylor galleries?

Both Sweeney and Drennan believe that the art landscape in Ireland is a very different place for young artists emerging today. Sweeney explains: “Of the peers I graduated alongside from GMIT in Galway in the noughties, only about five of us are still making art. But today, an artist’s world is much broader.” Fletcher, meanwhile, feels the growth in interest in Irish art is a consequence not just of recent events, but of the standard of education offered in this country. “In the past 15 years, the quality of MA degrees and postgraduate programmes in the visual arts has been extraordinary. Plus we’re training lots of really great people.”

All agree that the old cliché of the struggling artist as a solitary, introverted figure unable or unwilling to communicate with customers other than through his or her art is outdated and unhelpful. “Artists must be able to engage with clients. This has made all the difference to me over the past year,” says Sweeney. Drennan adds: “You can make a living as an artist, but it comes down to commitment and flexibility. The pandemic has certainly tested both.” In a year that has felt stagnant for so many, both artists are full of optimism and hope. “I think the sky’s the limit for Irish artists,” Sweeney proclaims.