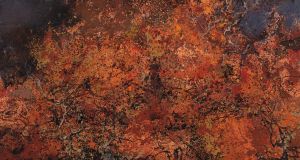 Hong Ling: A Peak of Reds 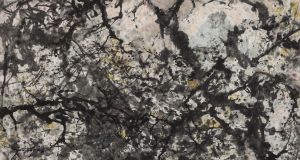 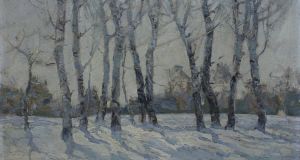 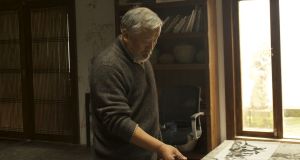 Hong Ling: exhibits a Taoist love of nature and a desire to grasp the essence of a subject, beyond surface appearances.

The Chester Beatty is justifiably best-known as a treasure house of antiquities, but its new exhibition focuses on a living Chinese artist. Although the show is described as a retrospective, the cumbersome formulation of mid-term career survey is probably more accurate, because the painter in question, Hong Ling, is just into his 60s and, judging by the trajectory of the work on display, has no intention of hanging up his brushes and palette anytime soon. He makes very large, densely worked, fiercely energetic paintings of the celebrated, spectacular, mountainous and wooded landscape of Huangshan in eastern China, where he lives.

As in the classical Chinese tradition, he also makes ink paintings on paper, but he is not at all a diehard traditionalist. He is very much a contemporary artist, not only because he paints mostly with oil on canvas, but also because he follows his instincts rather than a set of rules and conventions. He is not trying to recreate or perpetuate an antique style, not trying to keep it between inverted commas, but to take it on as a living, unfolding means of making art.

Take a work like Pine Trunks: Bones, painted in 2014. At just under two by 2½ metres, it’s a formidably large oil painting. The composition is firmly anchored to the recognisable, spiky shapes of pine trees – Huangshan is indelibly identified with the forests of pine trees clinging to the flanks of its soaring granite outcrops. But beyond that, all bets are off. Hong builds a multilayered, frenetically active picture surface with a combination of vigorous brush strokes and liberal splashes of pigment. Interwoven with the silhouettes of the pines, there are glimpses of a sky flushed with vibrant blues and pinks and off-whites, creating a dynamic, shimmering visual experience.

It’s as enveloping and immersive as a Jackson Pollock drip painting, which is not to say that it borrows from Abstract Expressionism. Strictly speaking, to a significant degree the Abstract Expressionists took their cue from Chinese painting and the Taoist philosophical framework around it. Pine Trunks: Bones conveys the excitement of seeing, but not only of seeing – Hong clearly wants the painting to bring us into the moment of being there and, if you are willing to take the plunge, it certainly does that.

It is true that it’s worth visiting the Chester Beatty to see this painting alone, but then the same can be said for most of the works in the show, which is a fascinating look at a largely unseen world. The curator is Shane McCausland, now based in London and a former head of collections at the Chester Beatty. It was initially seen in the Brunei Gallery, SOAS University of London, and will travel on to Bath from Dublin. At the Chester Beatty, the curator of the East Asian collection, Mary Redfern, edited the more extensive original show to provide a representative selection.

Hong was born in Beijing in 1955. His father was an historian and his mother a language teacher. When he reached his teens, the Cultural Revolution was getting into gear and eventually he and his contemporaries were sent off to the countryside to be re-educated in the virtues of agrarian labour. He lived and worked in an agricultural commune for three years, eventually becoming a cook. As normal academic life resumed, as a “worked-peasant-soldier-student” he went to study art at Beijing Capital Normal University and then the Central Academy of Fine Arts, Beijing, where he went on to teach. His post-graduation piece, an elongated female nude that suggests the influence of such artists as Chaim Soutine and Modigliani, is included in the exhibition. Hong was from the first an immensely able painter.

He married another painter, Xu Min (well known for her exceptional floral still lives painted in oil), and they had a son, Hong Ke. For a time Hong experimented with different modes of representation, very successfully, but it is fair to say that he really found his own voice when, from about 1990, he began to integrate traditional Chinese landscape ideas into his oil painting. Cold Snow (1991), which won an award when it was first exhibited, is a fine early example. At this stage he set about building a studio in Huangshan. While he travels quite a lot, Huangshan is at the heart of his work. A year-round engagement with the landscape throughout the four seasons, observing tiny and major changes, is essential to him, as is evident in his magnificent Four Seasons.

Traditional Chinese painting was rooted in calligraphy. Hong is in many respects a present-day example of one of the class of scholar-painters who first emerged in the Song Dynasties and produced what became known as “literati paintings”. These painters were part of a class of bureaucratic scholars, poets and men-of-letters that came into being as early as the Han Dynasty and played a vital role in Chinese art and culture. Hong shares with them a Taoist love of nature and a desire to grasp the essence of a subject, beyond surface appearances. There is a level of correspondence with the landscape work of some Irish artists, notably Barrie Cooke and Nick Miller.

The ink paintings included show that Hong is equally at home, and just as free, with the more traditional medium. He is capable of producing tremendously complex, energised compositions on a startling scale, as in Diffuse Spring. His larger paintings are rollercoaster rides: you throw yourself into them and hang on. With the huge Rainbow-like, for example, you wonder if he can manage to stay in control of the seething and tangled mass of paint and lines that he unleashes. Presumably he would say that he doesn’t retain control: he trusts to instinct. And it works.