From the Burren to Belfast: Sean Lynch removes our heritage from its neat packaging 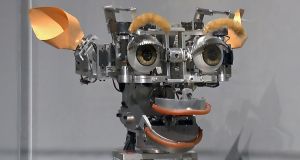 What Is An Apparatus? (2016-2017) (Still) by Sean Lynch. Courtesy the artist, Kevin Kavanagh Gallery, Dublin, and Ronchini Gallery, London 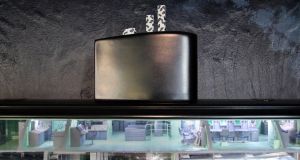 What Is An Apparatus? (2016-17) (Still) by Sean Lynch. Courtesy the artist, Kevin Kavanagh Gallery, Dublin, and Ronchini Gallery, London 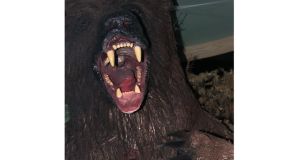 Visit the DHG and you might think that this haven of contemporary art has taken a turn to the past with the departure of its erstwhile director, John Hutchinson. Occupying pride of place is an ancient monument, the Tau Cross of Kilnaboy. But fear not, this sculptural treasure, elegantly carved from a single piece of Burren limestone, forms part of Sean Lynch’s latest exhibition.

Lynch, who was born in Kerry, has the mellifluous tones, solid demeanour and easy manner of a traditional storyteller. He is an artist whose practice, unusually, is centred on researching the byways of cultural history.

Time and again, trawling the archives, he recasts the familiar in a strange and startling light, drawing on media reports, photographs, original documents, artefacts, other salvaged material and texts. There are two strands to this show: A Walk Through Time, which incorporates a series of photographs and the Tau Cross; and Nine Excerpts from What Is an Apparatus?, a sequence of succinct video fables, part of an ongoing project, with Gina Moxley as narrator.

The photographs were taken in a deliberately informal manner by Lynch during a visit to the diorama exhibition, which gives his work its title, at the Burren Centre at Kilfenora. He was aiming to recreate the experience of a casual visitor to the interpretive centre. The dioramas, which have a brash theatricality, are intended to illustrate the history and heritage of the Burren. They were designed and created by Keith Payne in 2001. Payne, who forged a career making stadium stage sets for rock groups and props for Macnas parades – including Pink Floyd’s flying pig, the Rolling Stones’ pack of hounds and a gigantic, peeing Gulliver for Macnas – had settled nearby and was enlisted to take on a new challenge.

Lynch raises questions about the nature of cultural heritage, and how it is packaged, represented and commodified. In his accompanying essay, Michael Hill points out that just outside the gallery, Trinity’s Commercial Revenue Unit is in the process of installing ticket machines with the aim of lessening “queuing times for tourists” set on seeing the Book of Kells in the Old Library.

Does the intervention of an interpretive centre enhance the understanding of visitors to a site, in all its layers and complexity? Or does it diminish or even replace an encounter with the real thing? Rather than offering any simple answers, Lynch ups the ante by introducing the real thing, in the form of the Tau Cross, to the gallery. It is a compelling intervention. There’s no getting away from the aura of the object in all its beauty and strangeness: “Its horizontal cross-beam features two mysterious carved heads with expressionless faces gazing up to the heavens.”

Things are never as simple as they might seem, Lynch implies, for the cross remains shrouded in mystery, with many questions about it still unanswered. And as a piece of heritage it arrives in the gallery freighted with its own contentious history, detailed by Lynch and Hill. It has, notes the latter, “been the subject of much commentary and speculation over the years in relation to its age, function and symbolism”, none of which have been established to general agreement.

In 1967 it was thrust into the limelight when it was chosen as one of five ancient stone monuments to be shown as part of the first Rosc exhibition of contemporary international art. UCC’s archaeology professor, Michael O’Kelly, was an influential voice of widespread protest about the idea of Ireland’s mostly “religious monuments” being shown alongside “a selection of profane paintings . . . none . . . painted by an Irish man”. Three young men from Kilnaboy Youth Club temporarily kidnapped the cross in protest. Once they returned it, it did find its way into Rosc.

The cross now usually resides in the Heritage Centre in Corofin. A stone replica occupies the site on Roughan Hill, where it was first recorded. In addition, Hill mentions: “A Styrofoam copy sits within Keith Payne’s display . . . in Kilfenora, and a plaster facsimile made by the National Museum in 1908 is hidden away in storage.” Reproductions of various sketches of the cross made by various observers over the centuries indicate just how selective and fallible eye witnesses can be.

Lynch leaves us pondering on a kind of cultural uncertainty principle, and that notion carries over into his video fables in What Is an Apparatus? The title is taken from an essay by Italian philosopher Giorgio Agamben. The apparatus or dispositif in question is the late Michel Foucault’s vaguely defined but often-used term. Agamben proposes that it is any of myriad constructions, including cultural and technological constructions, that have the capacity to influence, persuade, control or divert our judgment, behaviour and perceptions. The smartphone is an obvious and extreme example.

One of Lynch’s fables centres on Belfast’s Titanic Experience, which is located close to where the doomed ocean liner was built and has proved to be an extraordinarily successful tourist attraction. It is also a perplexing one. The building, Lynch observes, “ingeniously appears akin to both the shape of an iceberg and the baroque prow of an ocean-going cruise liner of the Edwardian era”. He refers to a radio discussion on the eve of the opening of the building. The programme presenter wondered if monetising a tragedy was appropriate, given that many of the 1,517 victims “still lie at the bottom of the ocean”. The imperturbable PR guru had his answer ready. They had devised a way to acknowledge the fate of those who perished: “We’ve made a special allocation for the maximum occupancy of the building. 1,517 men, women and children are the most that can visit here at any one time.”