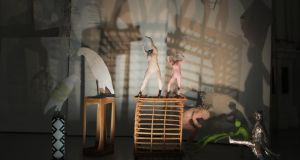 One of four adjoining, spacious lightboxes that form an extensive arena in My Mind’s I by Janet Mullarney 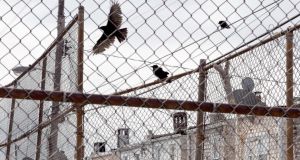 My Mind’s I – Janet Mullarney

There’s a fleet-footed, magic realist character to Janet Mullarney’s sculptures. They’re playful, but with a sharp, dark edge. Patrick T Murphy accurately likened them to Angela Carter’s writing. As with Carter, enter Mullarney’s world and you fall through an imaginative trapdoor into another realm of fables and fairy tales, where animal characters stand in for humans and meaning is cut loose from the bounds of convention. Her acrobats and performers evoke the heady, heightened space of the circus ring.

For My Mind’s I, she has assembled a large cast of sculptural characters – young and old, human and animal – and set them loose on a huge stage. It is composed of four adjoining, spacious lightboxes, forming an extensive arena or piazza, a brilliantly illuminated public space we can move around at will and, godlike, observe their triumphs and tragedies, their nobility and silliness, dreams and delusions.

Each of the figures is doll-sized. This from a naturally gifted sculptor and an adept carver, who has made larger-than-life figures with apparent ease. “I wanted to get rid of Sculpture with a capital S,” she comments. She is recoiling from the monumental, which she feels tends towards grand formality. And sure enough, there’s great fluency and freedom to the way she marshalls her ensemble.

She doesn’t over-elaborate anything or make a fetish of finish. Some carvings are briskly approximate, concluded with a few dabs of paint or drawn lines. Likewise with modelled figures: they can be meticulously detailed or broadly sketched. She’ll use paper cutouts and pieces of cardboard packaging, shaped and stapled into place. Fabric might be carefully tailored, or just a piece of cloth used like collage.

Everything is beautifully elegant and precisely observed. Every pose is exactly expressive. Once she captures the essence, she doesn’t keep going. The challenge is to nail it, then leave it be. The result is exhilarating, liberating and generous. She doesn’t try to disguise the nuts and bolts of how it’s all put together. It is completely demystified and approachable.

Her anthropomorphic animals are just that. “I found that I could use an animal to express human feelings, or traits, or character, more effectively than trying to represent someone being timid, say, or mean. Then you’re into describing an individual human personality, which is not what I want to do.” Arranged on the lightboxes, her characters form numerous tableaux. Dramas are played out, but never pinned down. She is not telling stories per se. “In that sense, I don’t quite know what’s going on,” she explains. “And I don’t want to know.” Until April 11th, highlanes.ie

The Troubles, and, even more, Northern Ireland as a troubled land, have challenged and exercised the minds of a number of significant photographers and photographic artists, usually male, including Paul Graham, Willie Doherty, Victor Sloan, Donovan Wylie and, not least, Paul Seawright, who was born in Belfast in 1965. Seawright turned to his teenage diaries for the exceptional series of works that established his reputation, Sectarian Murder. He had noted the killings in his diary and, in 1988, sought out the crime scenes and photographed them, showing the images together with contemporary newspaper reports, although without referring to the religious affiliation of the victims.

Since then he has pursued a busy, twin career path as an artist and a teacher. He is professor of photography at the University of Ulster and head of Belfast School of Art. His photographic projects have taken him to many locations: the inner, workaday worlds of the RUC and the Orange Order; Belfast’s gritty defensive architecture; the urban edge-lands of Tallaght in Dublin; the Paris Périphérique; gloomy forestry plantations; Africa’s mushrooming cities; and dusty, mine-ridden expanses in Afghanistan. Even views of sun-drenched north Italian landscapes turned out to have an ominous side: they record the documented locations of unexploded ordnance dating back to the second World War. You would think twice if he suggested a relaxing stroll.

No wonder one commentator summarised him as a chronicler of “malevolent landscapes”, a description with which he readily concurred. There’s another vital dimension as well. The landscapes are variously troubled and malevolent, but as with the Italian series, UXB, the nastiness is inherent, but mostly invisible. His photographs ask us to consider what we cannot see: the underlying fault lines in societies. That’s a big ask in a high-visibility, image-saturated age, but it is central to what makes his work interesting.

The List, at the Kerlin, is drawn from the third in a sequence of American projects. In it we see a number of generally run-down, rust-belt, small-town settings. Clapboard housing, lots of fencing, littered waste ground, makeshift curtains, shutters and screens, anonymous motels, blank block walls, no one in sight. Large-scale coloured prints alternate with chilly, pin-sharp, black-and-white close-ups of isolated details, forensic in feeling.

As the artist explains, he has sought out the places where clusters of ex-sex offenders tend to build up, individuals banished to the margins of society by strict residency restrictions. That’s a difficult subject, to put it mildly.

But, as ever with Seawright, the photographs are, paradoxically, gorgeously visual. It’s not just the stringent, wintry aesthetic, with echoes of some fine American cinematography. They are pigment ink prints and it’s worth looking closely at their surfaces. They’re painterly, not because they imitate painting at all, but because there’s a wonderfully rich, palpable quality to their colours and edges. Don’t rely on reproductions; go see the real things. Until March 21st, kerlin.ie