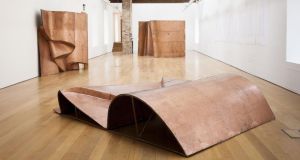 A detail of We The People by Danh Vo, now at Lismore Castle Arts

In the monumental setting of Lismore Castle in Co Waterford, Mark Sladen has curated an exhibition, Monuments , in which five artists set about deconstructing and subverting the whole idea of monuments.

More than one of them mocks or satirises the pomp and circumstance of the monumental impulse, but there’s more going on as well, including the consideration of alternative, egalitarian, democratic forms of monument.

Perhaps Vietnamese-born, Berlin-resident Danh Vo produced the most impressive of these. His composite or, if you like, fragmentary sculpture, We The People , has enjoyed great international success. Deservedly so. What he set out to do, starting in 2011, was to make a life-size recreation, in copper, of the Statue of Liberty.

Three segments of the whole statue are on view at Lismore. A copper skin is shaped over a structural framework. The copper sheeting is a lustrous, beautiful material. Glimpsing fragments, we don’t get an immediate idea of the whole, and each separate piece could well be an individual, rather splendid abstract sculpture. The fact that they are parts of a monument of such symbolic significance adds a nice frisson of meaning.

In fact, there’s something appealingly democratic in the way Vo’s fragments of the original Liberty, emissaries of an egalitarian ideal, continually appear in galleries around the globe.

From the sublime to the ridiculous: Argentinean Pablo Bronstein has developed a thriving practice by engaging with monumental Western architecture in various ways, including giving guided tours of particular sites, which sound very entertaining.

At Lismore, he shows a series of computer-aided architectural drawings of fantasy corporate buildings, packed with endless postmodern mannerisms and pointless flourishes, all too reminiscent of the grandiose corporate delusions familiar from the Celtic Tiger era.

At the head of the upper garden outside, he’s built a striking edifice that is, of course, a decoy, pure façade and all for show, a construction still garlanded with scaffolding.

Cairo-born Iman Issa also sets about deconstruction with humour. The title is a major component of her Material for a sculpture proposed as an alternative to a monument that has become an embarrassment to its people . Its physical aspect is a plain black console topped by two simple globe lights that alternately fade and brighten. She indicates the futility of investing in monuments, borne out in her other exhibit, a pedantically abstract memorial to a fallen patriotic soldier.

Greek artist Yorgos Sapountzis enlisted audience participation for an opening performance that drew on elements of a medieval pageant with various ritualistic trappings, leaving behind a jumbled, tattered heap of relics and ruins of the event, a bit like a collapsed marquee. His video, Gold (Thesaloniki) is an interesting work in which a shambling figure – himself – swathed in a golden cloak, negotiates a night-time city, a restless, homeless spirit. Made before Greece’s financial implosion, the work has certainly gained in relevance.

Quality control lapses with Aleksandra Mir’s video documentation of an art event, The Seduction of Galileo Galilei . It’s like a farcical re-enactment of the biblical story of the Tower of Babel. A group of people, aided by a huge construction crane, set out to build a tower of used tyres, a profane monument of sorts. Except they are pathetically, though not quite comically inept. It’s not that the project is doomed: it never really gets going at all.

In one sense that is, of course, the point of Mir’s enterprise, which recalls several performative pieces by Irish artist Brian Duggan about grand ambitions, futility and failure. Indeed, any of several pieces by Duggan would have been conceptually at home in this show and looked very well.

The problem with Mir’s work is she under-achieves at under-achieving. We never for a moment believe there’s going to be anything of consequence built, and no one involved seems to think so either, so there is no tension whatsoever.

Rather, there’s a certain embarrassment involved in engaging fairly serious resources on the sketchiest of pretexts. Belfast bonfire builders have engaged annually in much more impressive exercises in futility.

Sladen is a London-based curator, who operates independently but has a significant institutional record, including spells at the Barbican, London’s ICA and the Kunsthal Charlottenborg in Copenhagen. His Monuments is a limited success, but doesn’t quite live up to the promise of what is potentially a very rich theme. Still, Vo and Bronstein make it well worth seeing.


McKeown marvels
William McKeown’s premature death in 2011 shocked his many friends and the whole Irish art world. Lismore Castle Arts’s other summer exhibition features his work in the atmospheric setting of St Carthage Hall in Chapel Street. He is by no means an arbitrary choice. As it happens, Lismore was central to the development of his art.

Just prior to the millennium he visited Lismore. Friends had acquired an old convent building. What began as a casual visit developed into an 18-month residency. McKeown found the combination of the relatively austere setting of the convent interior and the expansive landscape outside inspiring, and he made the body of work that formed his first major solo show, held at the Douglas Hyde Gallery in 2001.

His spare, abstract-looking paintings of the early morning light were direct responses to the dawn at Lismore. The thin dark borders that frame the radiant centres of his compositions were derived from the windows that framed his view of the sky. The succession of individual cells in the convent also led to the development of another feature of his work: the rooms within rooms he used in several gallery installations.

In 2004 he returned to the convent when he was invited to show at the Northern Ireland Pavilion in the Venice Biennale. Setting up a canvas in each cell, he moved from room to room, tracking and painting the light from the beginning of dawn. The watercolours and acrylics on view at St Carthage were all painted at Lismore, and one painting has never been previously exhibited. It’s a fitting tribute.