Gaffney will use his Sky Academy Arts Scholarship for a project about the Shackleton Mill in Lucan that will involve film, photography and a book 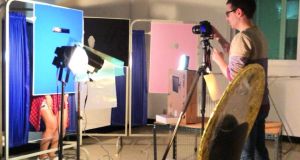 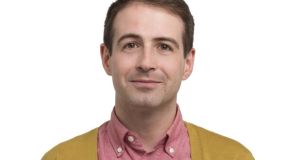 Dublin artist Kevin Gaffney has been awarded one of five Sky Academy Arts Scholarships. The scholarships are open to artists aged 18-30 in the UK and Ireland.

Nominally, Gaffney is an artist who works in photography and film. That’s a neat description, and it’s true, but it’s not even half the story. Writing is also central to his practice, absolutely central, and he writes well. He writes stories, scripts and monologues. He has also been a performer, as an intrinsic part of his own work. He’s not necessarily finished with performance but he has withdrawn from it somewhat.

Looking at the trajectory of what he has done to date, it is tempting to conclude that he appears less in his own work because he has turned out to be extremely good at dealing with performers. Not necessarily performers in the sense of professional actors, more individuals who are motivated for one reason or another to participate. He is good at finding them, drawing out and elucidating their stories and priorities and translating all those things and more into usable, rewarding material.

In doing so, he is clearly comfortable with several contemporary, popular cultural forms, including – besides mainstream cinema – television game shows and dramas, and music videos. It’s important to say, though, that he doesn’t make parodies or pastiches, but uses their implicit languages to convey emotional truths.

He is not remotely afraid of less populist forms, drawing on myths, psychoanalysis, surrealism, generic literature and poetic metaphor. He uses narrative but rarely within neat, definitive conventions. He is against closure, preferring to open up ambiguous conceptual spaces and leave the viewer with unanswered, provocative questions.

This is evident most recently in Our Stranded Friends in Distant Lands, a short film he made in Seoul that features in this year’s Éigse open submission exhibition at Visual Carlow. It is a dreamy, lyrical meditation on division – geographical, political and emotional – extending to the idea of a divided self. Perspective is provided by a view of the almost full moon, an image that recurs throughout. Does the moon look different from the other side of the border?

Three characters muse on borders, the places and people on the other side, and it becomes clear that, in one case, the border in question has to do with a problematic relationship.

Not long before that, he had produced Everything Disappears at the Taipei Artist Village in Taiwan. In quite a different vein, this work of seven chapters was made with four individuals: performance artist Revanshu, engineer William Hsu, office worker Isaac Tsai, and language student Lucie Chen. Essentially, “the idea was to try to capture a sense of their personality in a spoken portrait as a starting point”. The participants talked about themselves freely, and Gaffney devised a performance scenario in response, using, for example, the ubiquitous white safety nets he noticed at strategic locations in Taiwan. There was also an unseen fifth participant, he notes: a young Taiwanese gay man who volunteered an account of his experience of mental illness.

What emerges in the “psychological landscapes” that Gaffney devises is the individual complexity that underlies the ordinary. The familiarity of a world of social convention is replaced by a more malleable, fictional space. He is enduringly concerned with the way we perform identities and how, despite the evident conviction of the performances, identity is at heart constructed, manipulated and projected. In practice, the apparent order we inhabit is always susceptible to disruption as subconscious desires are acknowledged and presumed identities are challenged.

Gaffney was born and brought up in Dublin. He studied fine art at DIT from 2004. Before he went there, he knew he wanted to study art, but he also knew that he didn’t quite fit into the conventional mould: “Art was one of my worst results in the Leaving, less than physics even.” But DIT was a good experience. “They had a very open attitude. Their idea was to teach you the skills and let you go. I tended towards film and photography.”

After receiving his BA, he went on immediately to an MA in photography and the moving image at the Royal College of Art in London. He has mixed feelings about that. “In retrospect, I was too young. The teachers were good, they were supportive and they really pushed you. It was very challenging, very intense. I think it would have been better if I’d been a bit older, as it was I didn’t quite realise how special it was.”

He wrote a thesis on the cultural ubiquity of Lady Gaga, which was well received. But overall he did not warm to London and gravitated back to Dublin, where he is now based, although he does travel a lot for working residencies, most recently in Iran.

Each Sky scholarship is worth €38,000 towards the development of a project and living costs for a year. It also includes mentoring from Sky and the arts industry.

Gaffney has already found that helpful. “They’re really focused on helping you look at how you are going to achieve your concept. They look at the problems you’re likely to encounter. It’s very practical and very positive.”

The other four scholarships went to visual artist Sarah Maple, music producer Adebayo Fakos, writer and performer Jonnie Bayfield, and creative producer Anisa Haghdadi. Gaffney proposed writing and making a body of work called Tectonic Plates of Conversion, exploring “areas of forgotten industries which remain as spectres on the Irish landscape”. That’s a broad subject, but in fact his idea is quite specific. It centres on the history of Shackleton Mill, also known as the Anna Liffey Mill, an imposing industrial-scale complex, including a manager’s house, on the north bank of the Liffey at Lucan.

He aims to produce two series of photographs, a film and a book, all to be exhibited in the Linenhall Arts Centre in Castlebar, Co Mayo, in August next year.

He has a liking for “decaying locations”, and the mill is exceptional. It produced flour for nearly 200 years until its closure in 1998, and it is thought that there had previously been mills there as far back as the 12th century.

Fingal County Council acquired the mill in 2002 following protests when the site was earmarked for development.

The council’s long-term plan was to retain it as an industrial heritage site open to visitors. In 2007, a detailed OPW proposal designated it as the centrepiece of a potential 20km linear park along the Liffey from Dublin to Celbridge. Lack of funding has stymied that ambitious project. The nominal budget for the restoration of the mill is €6 million.

Gaffney was attracted by the atmospheric nature of the location and the richness of its industrial and human history. In the late 1850s the Shackletons, a Yorkshire Quaker family who had been involved in flour milling since 1776, took over the mill, expanding and upgrading it in several phases. Richard Shackleton, the last of the family to oversee the mill, carefully preserved a wealth of historical documentation, and the building complex is itself a historical treasure trove.

Originally a stone mill, it was converted to a roller mill in the 1880s and updated with Miag rollers in the 1930s.

The formidable, water-driven turbines are still in situ, as is much else, including the rollers, sifters, pump room, the silos, weighing scales and quality-control ovens.

In many respects it looks like a working mill, but with an unmistakably poignant, Marie Celeste-ish air of sudden abandonment. Photographer Tim Durham made a careful record of it in 2009 – the same year that the mill featured as a location in Inspector George Gently, and received Martin Shaw’s enthusiastic endorsement.

In many respects the Shackletons were excellent and enlightened employers but tensions did arise. Notably during the 1913 Lockout, when George Shackleton took a very definite stance against Jim Larkin and the ITGWU, seeking assurances that mill workers were not associated with the union.

The appeal of the site, not least its idyllic, leafy setting on the river, and the richness of its history, is obvious, but Gaffney is not aiming to make a history of the mill per se. What appeals to him is the nature of the experiences of the people associated with it.

This autumn, he aims to repopulate the buildings with characters currently under development, so that it lives again as their psychological landscape.

A romantic encounter with Ireland’s most charismatic business mogul