Exhibition based on 60 portraits by five photographers 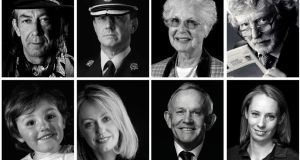 A photographic exhibition that seeks to capture the essence of Cork city in a collection of 60 faces was unveiled yesterday.

A fisherman, a film-maker, a senior citizen, an Air Corps officer and a travelling pianist are among the portraits of well-known and not so well-known native and near-native faces that have gone on display in various venues in the city.

The exhibition was launched by Munster rugby star Ronan O’Gara, whose 15ft by 11ft image was hoisted onto the facade of the Sextant bar at lunchtime.

“I was looking for the kind of face that almost instantly tells you something about who the person is,” Glandore-based aerial photographer Denis Horgan said of the concept. He was inspired by the Faces of London project and enlisted the services of five leading photographers.

Pick and mix
“I wasn’t looking for people like politicians or priests, I wanted something new and different. I wanted a mix of people, some well known and some not so well known and I spent some time picking out the faces,” he said.

The real stars hail from the broader community, according to Mr Horgan, with pictures of faces representing the arts, business, sport, emergency services and community life.

“It’s always later in the shoot that the great shots come. We are really happy with the results, it’s a great project to be part of,” he said.

While some of the pictures are hanging on prominent Cork buildings in association with the city council, the bulk of the collection will greet some 1.25 million passengers arriving at Cork airport over the coming months.

The exhibition is also expected to raise money for two charities, Marymount University Hospice in Cork and Haiti-based Irish NGO Haven, with donation points in place for both causes at each exhibit.

Picture of happiness
O’Gara, whose picture was taken by John Daly, said he was put at ease by the photographer and enjoyed the experience.

“There’s not a family in Cork that hasn’t been touched by the services of Marymount hospice, so I’m happy to be able to help,” he said.

The Faces of Cork exhibition also features the work of photographers Eddie O’Hare, John Roche and Michael Sheehan and runs until September to mark the year of the Gathering.

Let’s Do It: So detailed, we can’t see Victoria Wood for the trees
6

Even if Biden becomes president, there’s no turning back
9

The 20th century US was a young place. Now it looks uncomfortably old
10