In the visual arts strand, there is evidence of joined-up thinking in the inclusion of abstract painter Marilyn Lerner, sonic glass work by Róisín de Buitléar and Karen Donnellan, and Max Streicher’s celestial cloud installation 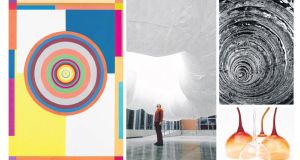 Clockwise from far left, a work from ‘Circle in the Square’ by Marilyn Lerner; Cloud Tyvek by Max Streicher at St Mary’s; O by Karen Donnellan; and Róisín de Buitléar’s blown-glass musical instruments

Eugene Downes’s first year as director took the Kilkenny Arts Festival back to its musical roots. The scale and ambition of the programme would have been unimaginable 41 years ago. But while music rules, the visual arts strand is much more than an afterthought. In fact, there’s evidence of joined-up thinking in the inclusion of the abstract painter Marilyn Lerner at the Butler Gallery, sonic glass work by Róisín de Buitléar and Karen Donnellan at the National Craft Gallery, and Max Streicher’s celestial cloud installation in the former chapel of St Mary’s.

The intricate rhythms and harmonies of Lerner’s poised compositions feel closely related to music, and she has acknowledged the influence of the ritualised patterns of the Javanese gamelan orchestra. Working closely with Liam Ó Maonlaí, de Buitléar has devised and produced a series of elegant blown-glass musical instruments. Donnellan explores the curative potential of sound in ingenious sonic pieces. Streicher’s clouds could be seen as a visual evocation of great sacred music soaring through the church interior.

Streicher, who is Canadian, is known for his inflatable sculptures and installations. Outside In, at St Mary’s, brings the sky into what was a chapel and will soon be a museum, designed by architects McCullough Mulvin.

St Mary’s dates back to the beginning of the 13th century, was altered over time, substantially rebuilt in 1739 and has latterly been a parish hall. It is tucked unobtrusively in the heart of the city. Currently it’s an empty space, pared-back and raw, with layers of old paint variously revealed. The clouds float and tremble with the currents of air in the building. The result is simple, but very effective.

Streicher maps the cloud shapes on a computer, and cuts synthetic papery white material – Tyvek or nylon spinnaker are staples – according to the specified pattern. The pattern is complex and the scale is huge, but he stitches the many individual panels together on his sewing machine, often never seeing the overall form in its actual, three-dimensional state until it is in situ and industrial fans pump in air.

A sense of wonder

Just up the road, in Kilkenny Castle Park, the Architects of Air have another pneumatic installation. This year’s luminarium, Pentalum, characteristically marries geometry with an air of fairground fantasy, leading visitors through a network of tunnels to a series of luminously coloured domes. The artist behind it, Alan Parkinson, aims to instil “a sense of wonder”, and, judging by the general audience reaction, does that very well.

More often than not, geometric abstraction leads painters towards a tighter, narrower visual vocabulary. Think of Mondrian’s right-angled grid, Josef Albers’s squares, or of stripes in the work of Agnes Martin, Bridget Riley and Sean Scully. Marilyn Lerner has followed a different path. As Circle in the Square, her Butler Gallery show, demonstrates, she looks on abstraction as an infinitely flexible visual language and feels no need to confine herself to one motif or structure.

Lerner was born in Milwaukee, Wisconsin, and went to New York to study. As she points out, she qualified in printmaking and went on to make sculpture before gravitating towards painting because of her interest in colour. She uses it in an amazingly free way, drawing on an extensive palette with some audacious colour pairings, including the combination of giddying complementaries. She is primarily an instinctive artist and she doesn’t close off any possibility when she embarks on a painting or, more accurately, paintings: she prefers to work on several pieces in tandem.

That’s partly because she likes oil paint, which takes a long time to dry, and her often complex compositions are built up from precisely defined areas of flat colour. They are geometric, but painted freehand, with the sensitivity of the human touch evident up close. In fact, Lerner is all about that sensitivity. She is acutely attentive to the quality of the surface and doesn’t, she remarks, overpaint. The nearest she comes to that is to sand away an area of colour she is not happy with and redo it.

Her art is meditative in terms of both its making and its reception. Some works are relatively simple in form, but mostly they require some time so that one can get a sense of their underlying rhythms and patterns. Spells in North Africa and Asia have influenced her. A spiritual dimension has been important to abstraction from the beginning, and Lerner’s work is unmistakably close in feeling to that of the Swedish painter and mystic Hilma af Klint. It’s a lovely exhibition, beautifully installed, and it runs well beyond the festival, until October 5th.

Resonance, across the road at the National Craft Gallery, also runs on, until October 27th. It is really two solo shows, with glass and sound in common. De Buitléar’s work began with a project to make works in glass that expressed Irish identity. She thought of music, and, working with Ó Maonlaí, devised and made a series of elegant glass forms that not only refer to a number of musical instruments, including lute, harp and bodhrán, but also function as instruments – slip on earphones and you can hear them.

In Cercle, Donnellan explores various aspects of the healing, therapeutic qualities of sound, drawing on several alternative therapies and theories. They begin with the meditative Buddhist practice of drawing a circle, Enso. Then on to the Solfeggio frequencies, a family of frequencies claimed to produce healing tones, and 432 Hertz music tuning, claimed to be more beneficial in many ways than the standard 440 Hertz tuning in general use. All are incorporated or expressed in blown glass works, some of which are used as amplifiers. It amounts to a subtle, engrossing body of work.

The highlight of the Grennan Mill Craft School exhibitions is Cathy Dineen’s Solvitur Ambulando, a formidable achievement that has already featured in this newspaper. Several interwoven, episodic narratives unfold in the form of captioned images drawn and painted on to oak blocks. They are punctuated by a number of shrine-like alcoves containing richly elaborated sculptural figures.

The work chronicles some five years of Dineen’s life, including walks through Britain, Italy and Spain. She settles into the format, which allows her to encompass landscapes and close details, oddities and pets, things that happened to catch her attention and things that struck her deeply. She delivers it all with the bravura humour and scope of a picaresque novel, while also movingly capturing the inexorable passing of time, the fragility of life and an awareness of mortality. It’s a show that really should tour and be seen more widely.

Also at the Mill, Gerard Casey’s tactful, thoughtful paintings respond sensitively to everyday experience, environments and memories. Suzanne Crampton’s photographs convey the exuberant vitality of her flock of Zwartbles sheep from Friesland, and other animals and birds around her home. The group of Filament Fibre Artists – Hilary Bell, Sarah Dawson, Lucinda Jacob, Sheila Jordan, Jean McKenna and Tara Ní Nualláin – show the remarkable versatility of their medium. Larry Kinsella treats candle-making as a sculptural form and Klaus Hartmann’s robust, wood-fired ceramics are proud of their functional inspiration and effectiveness.

Bruce Springsteen at 70: 13 surprising facts about ‘The Boss’
7