Six paintings, including two Rubens, were set to be sold on July 9th 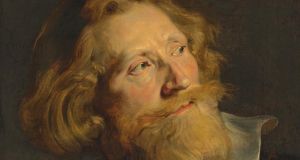 Rubens portrait of the Bearded Man.

Christie’s has formally withdrawn seven pictures owned by the Alfred Beit Foundation from next month’s ‘Old Masters’ auctions in London. The action house said the decision “followed the Foundation’s request to postpone the sale of these works in order to explore philanthropic alternatives before October 2015.”

Six paintings, including two by Rubens, were scheduled to be sold on July 9th. A drawing titled Aurora and Cephalus by 18th century French artist Francois Boucher was scheduled for a separate auction on July 7th. The combined top estimates for the pictures was around €11 million.

The foundation, a charitable trust that runs Russborough House in Co Wicklow, had asked Christie’s to sell the pictures to raise money to create an endowment fund to help with running costs at the stately home. On June 16th, following a meeting with the trustees of the foundation, Minister for Arts Heather Humphreys said they “were unwilling to either delay or cancel the sale, as they would incur a fee of £1.4 million for breaking an agreement with the auction house, Christie’s”.

Christie’s declined to comment on the “break-fee”, if any, and said: “We do not discuss confidential client contracts with any third parties.” Considerable expense has already been incurred in preparing for the sale. Some of the paintings were shipped to New York and Honk Kong last month for pre-auction viewings and a lavish auction catalogue – priced at £119 — has been produced.

On Tuesday, the board of the Beit Foundation formally agreed to postpone the sale “following a proposal from private Irish donors for the possible purchase” of the paintings. The decision was welcomed by the Department of Arts which said it was understood that the private donors could avail of a tax provision involving “the donation of artworks to an Irish cultural institution using Section 1003 tax relief”.

The foundation cautioned, however, that “if the current proposal or other proposals do not reach a satisfactory conclusion by October 2015, and Russborough is otherwise unable to raise the required funds, the sale of the artworks via auction will be resumed”.

In all, the foundation secured export licences for 11 pictures from Russborough House. The seven whose sale has now been postponed; two paintings by English artist John Atkinson Grimshaw that have already been sold at Christie’s for a combined total of £112,500; a painting by French artist Jacques de Lajoue, believed to have been sold to London-based Ukrainian-born businessman Leonard Blavatnik in a privately-brokered deal for in excess of €500,000; and a painting titled ‘The Monk’ which has been returned to Russborough, unsold, after its attribution to Rubens could not, apparently, be established.

Hamilton the movie soars above its stage-bound origins
4

The Jakarta Method: The US playbook of suppression across the world
9