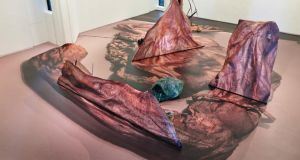 The ‘haphazard autopsy’ of Four Fold by Sam Keogh 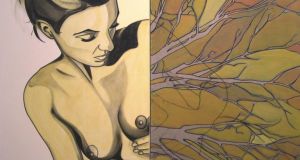 The Tether by Jeff Schneider 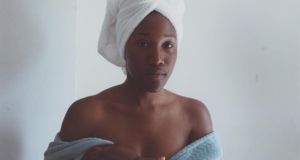 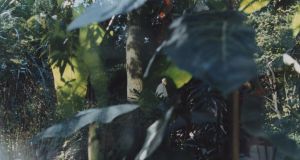 Imprinted on the floor of the Douglas Hyde Gallery is a vast photographic impression of human remains, a body buried in bog and preserved by the chemical character of peat. Preserved but altered: shrivelled, flattened by the accumulating mass and tanned to a leathery sheen. And eventually unearthed, to be analysed, autopsied, speculated upon and displayed.

That progression was the starting point for Sam Keogh’s exhibition Four Fold. Specifically, it was his mother’s unease about the casual, interactive “virtual autopsy” of Gebelein Man, a 6,000-year-old preserved figure from Egypt, available to visitors at the British Museum.

The source of Keogh’s figure is closer to home. Old Croghan Man is actually a partial figure, discovered by peat workers in Co Offaly. As often seems to be the case with bog bodies, Croghan Man was an Iron Age sacrificial victim, killed brutally and ritualistically. Keogh’s interest may be to a large extent anthropological, but it is not strictly archaeological. His work is not about the story of Croghan Man, absorbing though that is. He’s engaged by what the museological treatment of human remains says about us, culturally, and our attitudes to life and death, fact and fantasy.

His exhibition opening was another outing for his distinctive performance persona: hyperactive, abrupt and delivering a non-stop torrent of discursive commentary that can verge on incoherence. His outline script for the performance is included in the show’s accompanying publication. This jigsaw of parentheses is a good piece of work in itself. Follow a video of the performance and you can see that visitors were greeted initially by a flat image on the gallery floor.

Keogh charged around, raising sections of the image like pages in a giant pop-up book, and propping these flaps up with a number of Flintstones-like devices while gabbling breathlessly. But the surface he opened up was essentially the leathery skin of Croghan Man: he was enacting a haphazard autopsy. The revealed undersides of the skin are collaged with myriad imagery relating to dead bodies, skeletons, fictional reanimated bodies, artificial, robotic bodies – and Teenage Mutant Ninja Turtles. He arrived at the Turtles via a meditation on the taxidermied body of the last Galápagos tortoise, Lonesome George, in the American Natural History Museum. When George died, aged 102, the species became extinct.

The promiscuous mingling of high art and low, pure science and quirky fantasy, the sacred and profane, is typical of Keogh’s sensibility. And he relishes devising ambitious projects for big spaces. He has tackled the Project’s Black Box and the Kerlin’s white cube, and now the cavernous Douglas Hyde is another triumph. Until July 22nd, douglashydegallery.com

Oliver Sears brings together paintings and furniture in Nest Design & Jeff Schneider. He has a track record at this sort of thing. His argument is that when people acquire a work of art, they generally don’t display it in an otherwise blank, empty space. It fits into their home, and they live with it in the midst of all their other stuff.

It helps that Nest’s lacquered pieces are stunningly elegant and tactile, and Schneider’s paintings, mostly diptychs, have an illustrative clarity and directness. Schneider actually has a background in commercial design before studying fine art. In New York since 1990, he worked as an assistant to several artists, including David Salle, and it is Salle whose influence is clearest in his use of a diptych format combining two disparate kinds of imagery: generic nudes and natural patterning.

He notes that a more immediate influence was the poet Carl Phillips, particularly his poem Trees. His way of letting discrete phrases stand side by side, letting the reader make the connections, greatly appealed to Schneider. Despite their apparent nakedness, the nudes have the bland impassivity of professional models, while details of trees – from close-ups of leaves to more general views – hint at depth, complexity, a wealth of inner life. Colour is kept to a minimum and paint is used in washes with simplified outlines, or over photo-silkscreen prints.

Nest is Neil and Annabel McCarthy. They studied in the UK and are based amid walnut groves in southwest France. Their desks, tables and chairs are painstakingly made. While they clearly love wood as a material, they use it together with other materials including Jesmonite and lacquer. And they are technically audacious, as in their chairs finished with swirled lacquer and the juxtaposition of highly polished lacquer with burned wood edging.

Although these objects are notionally functional, would you really risk them in the hurly-burly of everyday life given the inevitably high cost and the sleek finish? Perhaps so, if money were no object, but they justify themselves aesthetically, regardless. Until June 25th, oliversearsgallery.com

Cunnane’s photographs, C-type prints from 35mm film, are small and fragmentary. They are “dedicated to the idea of witnessing”. We see whatever catches his eye in the course of daily life: scenes and people with varying degrees of personal meaning for the artist. Even when closely linked to him, a certain distance is evident. A set of black-and-white prints of a couple is titled Untitled (Parents).

This is photography as a melancholy art, perpetuating memories of a world already lost. He is at pains not to make conventional images, the kind we know how to read and can easily discard. The results are intriguing. Patterns emerge. He is drawn to plants, for example, and he likes oblique views of a face or a figure that you could easily overlook in a mass of other detail. Something about the spirit of the show recalls Michelangelo Antonioni’s visually ravishing identity-switch film The Passenger, as the protagonist travels in England and Europe, a detached witness to the rites and patterns of ordinary life, including his own life and family.