Belfast’s barriers are still there, but good neighbours can make the glass look half-full 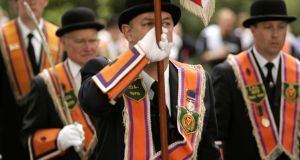 Residents chose to open the gates on the cusp of the volatile summer marching season. Photograph: Dara Mac Dónaill

On a rain-soaked day in Belfast, a year ago this week, something quietly extraordinary happened. A door, which had been cut into the inch-thick reinforced steel security wall marking one of north Belfast’s most contested interfaces, slowly swung open. Thirty metres away, across a cleared stretch of no-man’s-land, the bolts and padlocks were removed from a door in another steel wall. And so, for the first time in 30 years, people from the nationalist and unionist communities on both sides could walk through freely.

The temporary opening of the Flax Street / Crumlin Road interface – situated close to the flashpoint at Ardoyne shops, the scene of serious disorder following loyalist parades in recent years – was part of an art project called Ambulatorio Belfast, created by the renowned Colombian artist Oscar Muñoz. Glazed aerial maps of north Belfast were laid out like paving stones to create a glassy corridor between the two opened doors, so that residents would feel as though they were traversing their own home ground, transformed into a city without barriers.

It was the culmination of a long, sensitive collaboration between the two communities, sustained by the kind of trust, patience and good humour that can only come from years of close personal relationships.

It wasn’t a coincidence that residents chose to throw open the interface gates in this most febrile part of the city, at the most volatile time of the year, right on the cusp of the Twelfth; it was a demonstration of mutual confidence and hope. And the gamble paid off: the doors stood open every day for the three-week long duration of the exhibition with no trouble at all. What was striking was how quickly the situation became part of everyday normality, with people nipping through as a short-cut to catch a bus or get into town. There was genuine regret when the doors closed and the interface once more became a grim, impenetrable barrier.

Exactly one year on, the participants of Ambulatorio Belfast gathered in Ardoyne library to discuss the impact of the project, and how similar ideas could be used to “draw down the walls” in other parts of the city. Outside in the street, members of the Greater Ardoyne Residents Collective, a hardline republican group, held a protest in opposition to the imminent Orange Order march on the Twelfth.

Later, on the same day, the Parades Commission announced its ruling that there would be no return parade past the contentious Ardoyne shop fronts, following the breakdown of last-minute talks between the Orange Order and moderate nationalist residents. The decision prompted a furious reaction from unionists, with DUP representatives describing it as “illogical and inconsistent”, and warning that it could cause “massive damage” to community relations.

This is always how it is in the tense days before the annual precipice of the Twelfth. Many people (including numerous disaffected Protestants) have fled over the border to Donegal. The morning and evening rush-hours have evaporated. Belfast is a ghost town, waiting for something to happen.

There may or may not be trouble at Ardoyne, the North’s most intractable parading problem, or at one of the many other Twelfth of July flashpoints. Yet when the petrol bombs do fly, their violent immediacy has the effect of obscuring the slow, quiet, painstaking and largely unacknowledged cross-community work which is transforming many Belfast interfaces. The TV cameras zoom in, drawn irresistibly to the familiar scenes which announce to the world that the city is, once again, burning.

The flames are real, of course, but so are the long-established relationships which endure both before the fires start and after they have been extinguished. Even at the epicentre of the loyalist flag protests in inner east Belfast, as hooded men battered police Land Rovers, the annual cross-community carol service in the area went ahead as usual, Santa hats and all.

It would be both foolish and absurd to claim that a tide of cheery inter-communal harmony is gradually washing away Belfast’s so-called peace walls or, as they are now known in the euphemistic post-conflict lingo, “defensive architecture”. There are currently 99 barriers in the city and, dispiritingly, a third of them have been built since the paramilitary ceasefires in 1994.

Despite the new 10-year plan to bring the walls down, recently announced by the First and Deputy First Minister, some of them have even been extended in recent times, made higher and wider, or topped with vicious turning spikes.

But equally, the tired old ‘communities riven by hatred’ narrative, so popular at this time of year in the North, is only half (or less) of a long and very complex continuing story. All is rarely as it seems on the surface of this curious place. And occasionally, something as simple as a door cut into a wall can start a conversation that leads somewhere entirely new.