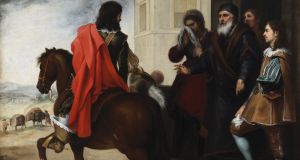 The Departure of the Prodigal Son. Courtesy National Gallery of Ireland

What is it?
The Departure of the Prodigal Son is one of a series of six paintings by the Spanish painter Bartolomé Esteban Murillo (1617-1682), dating from the 1660s. The six works chart pivotal moments in the biblical parable about a son who squanders his inheritance but, to the dismay of his dutiful sibling, is forgiven.

How was it done?
It was painted with great verve. Beyond his obvious technical ability, Murillo had an instinctive sense of drama and his works are invariably charged with great life and energy.

Where can I see it?
It and its companion pieces are featured in the exhibition Murillo: The Prodigal Son Restored (Room 31, National Gallery of Ireland, Dublin, February 29th-August 30th, Admission free). The display, supported by the Blavatnik Family Foundation, includes the full series of six paintings, plus a number of related prints. The paintings were last on view some 30 years ago. They have been the subjects of a significant conservation project, and the show has been curated by the National Gallery’s painting conservator, Muirne Lydon, and the gallery’s curator of Spanish and Italian art, Dr Aoife Brady. The paintings formed part of the Beit Collection and were presented to the gallery in 1987. A number of events associated with the paintings and their conservation will be held during the exhibition’s run.

Is it a typical work by the artist?
It is a reasonably typical if fine example, and it dates from a time when Murillo’s style had modulated and softened considerably from its early stages. One of the founders of the Spanish Academy of painting, Murillo was born and worked in Seville. Initially he took on Zurbaran’s dark, weighty tenebrism. A crucial commission in the mid-1640s for the Franciscan monastery in Seville (the paintings are now variously dispersed) established his reputation, to the extent that he displaced Zurbaran as the Seville painter and ran a thriving workshop in the city. Over the succeeding years he lightened his approach with infusions of Venetian and other influences, probably be virtue of his seeing Madrid’s royal collections. In terms of his reputation historically, he was perhaps unlucky in that the two main areas of subject matter he worked in, devotional religious subjects (the immaculate conception being a frequent theme) and, in contrast, lively genre scenes inhabited by a cast of street urchins, became hackneyed and sentimentalised in the work of other, less capable artists. The floating drapery and radiant expanses of his devotional works earned the not altogether complimentary designation “estilo vaporoso” or vaporous style. Nonetheless, in Spain his influence extended well into the following century, and the Prodigal Son series gives a good indication of his considerable abilities.

Do you download illegally? Are you morally okay with that?
7

As the world transforms, so too must its poetry, disregarding tradition
8