Revamped event, with prize fund of €20,000, showcases the work of emerging artists 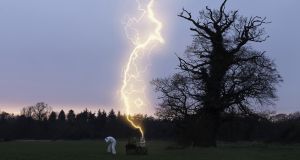 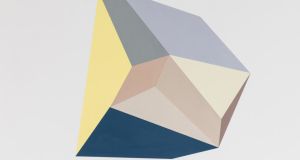 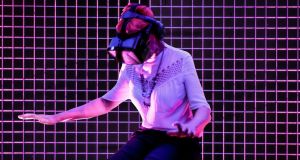 The Weight of Water 05 by Elaine Hoey. 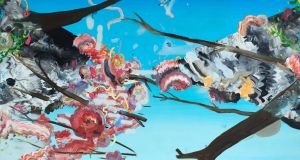 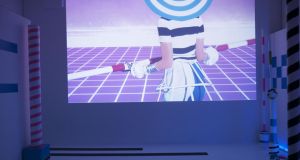 Making it in the art world is a mixture of talent, ambition, grit and very good luck; and you need a hell of a lot of all four. The brutal fact is, of all the artists graduating from college, only a tiny few will get close to making a living, never mind reaching star status. That’s why the reimagined RDS Visual Art Awards are such a welcome development.

The revamped event builds on the RDS Student Art Awards, and has a prize fund of €20,000. A team of curators visit the art college degree shows, selecting 130 students whom they invite to apply. From these, a judging panel chose 13 for an exhibition, which has been curated by artist Alice Maher. “It’s a brilliant prize,” says Maher, who got involved because she “realised what a major thing it could be for graduates to aim for. Being in a position to give money is good too,” she says.

Maher remembers her own graduation as like “going into a black hole. You move out of a situation where you’re surrounded by structure, critique, debate, and you have to try to find a space where you can still have that […] It was difficult then, but it’s twice as difficult now, because to get a space in a major city is impossible.” She describes the selection process as inspiring, “I was very impressed with how aware all the graduates are of what’s going on around them, what’s going on in the world, and the level of these artists’ commitment, and courage to make the work.”

“Since the end of the second World War and throughout the Cold War, devices have been developed to affect the human nervous system, and ultimately manipulate thinking in society. The aim of this work is to investigate the intoxicating authority of the photograph, and to draw attention to the dangers of credulity. I want people to feel the confusion of reality, and I would like to provoke the viewers to question the authenticity of information provided by the media and institutions of authority. Being shortlisted for this award is an honour in itself. Winning would definitely make me question reality.”

Graduated from Belfast School of Art

“The materials are ones that are never regarded for being aesthetically beautiful. I want people to observe them, explore their surfaces, see beauty within their rawness, and hopefully acquire a sense of connection to the everyday places we inhabit. The exciting thing about being an artist is you can never really know for certain where you will end up.”

“This work asks the viewer to become totally submerged in an abstract narrative that explores the unfolding refugee crisis. As millions are forced to flee their homes and seek asylum in Europe through treacherous routes, many journeys made by sea have ended in disaster and death for those struggling to reach “safety”. I hope to open up conversations about this vast humanitarian crisis through a virtual reality system, which generates psychophysical experience through presence and performance. The art world right now is full of exciting new potential ways of making art and meaning. Part of working with an emerging medium means you get to part of the conversation in defining its creative potential.”

Makes video, painting, sculpture and installation to look at his childhood experiences in Iraq, and how the past is constantly revised to meet the present as we construct memories.

“I’m examining the notion that everything around us has an agenda, and that sometimes something may present itself as non-threatening, but in the long run may have a more sinister effect. I’m also paying attention to the variation between the personal and the collective experience of traumatic events. Collectively we can recite factual truths but individually we only have our point of view. It may be a version of reality, but it can definitely be warped and altered as time passes.”

Makes energetic bright paintings that sit between reality and abstraction, and tease the imagination with the edges of stories and clues to possible meanings.

“The paintings often describe no specific events. The worlds are suspended in time, with no sense of gravity, living within a liminal space that is neither here nor there. All is not what it seems. I want people to get lost in the narrative of the paintings and also in the paint itself. They are worlds that can only be made possible and described through paint.”

Makes installations, sculptures and video looking at ideas of beauty, fashion and how we create ourselves. She also works as a creative director and stylist.

“I like to build immersive environments, creating the perception of being physically present in a non-physical world. My installations are imaginative and theatrical, and so I hope people feel excited and inspired by them.”

Makes abstract sculptures using found objects, creating shapes where tension, balance and weight comment on the forces that shape our society, such as globalisation and capitalism.

“I want the viewer to feel part of the manifestation of art; by inviting them to participate, the space shifts from institutional to social, creating common experience. I feel we need to have less focus on art markets and value, and more focus on meaningful engagement. The continued aligning of art schools and universities with market needs is also a worrying trend. We are in danger of tipping the balance from experimentation and liberal thinking to one of stratification and control. Education is not simply training for some specific job skill, it is about creating an environment to help students engage in critical thinking.”

The awards, including the RDS Taylor Art Award of €10,000, the RC Lewis-Crosby Award of €5,000, and a studio plus stipend for a year with Monster Truck in Dublin, will be announced during the exhibition, which runs from October 26th-31st. rds.ie

Epidemics and Society: History shows they are here to stay
4

Normal People: Full-frontal nudity was not its most radical feature
9