Quick be offended! When ‘shock art’ does its job 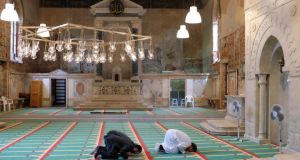 Deliberately provocative? A Catholic church that has been transformed into a mosque for the Venice Biennale by artist Christoph Buchel. Photograph: Casey Kelbaugh/The New York Times 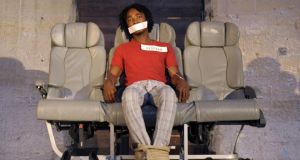 Closed following protests: An artist performs in a play entitled Exhibit B by Brett Bailey at the Eglise des Celestins in France. Photograph: Franck Pennant/Getty Images

Pickled sheep; blocks of turf; sculptures made from human blood: art can be many things.

At this year’s Venice Biennale, Swiss artist Christoph Büchel, lining out for Iceland, has set up a mosque in a former Catholic church. The church had been disused for 40 years, and Büchel worked with the Islamic community in Venice, where there is no official mosque on the archipelago, to develop support.

Citing the international situation and the “possible risks of attack by some religious extremist”, the authorities threatened closure. When Büchel and Icelandic curator Nína Magnúsdóttir determined to keep it open, Artforum.com reported the official response: that “special legal permission is required to create a place of worship in Venice”. Ahh, replied the artist, it’s not a place of worship – it’s a work of art.

But if art claims privileges and a space beyond censorship, what responsibilities does that imply? Does, literally, anything go? The answer is a complicated yes and no.

At the same time as reports were emerging about Büchel’s mosque, it was announced that American artist Chris Burden had died. Burden came to fame in the 1970s for pushing performance art to its extremes with Shoot (1971), in which a colleague shot him in the arm; and Trans-fixed (1974), in which he had himself crucified on the bonnet of a VW Beetle.

All these generated controversy. And yet, when loyalist paramilitary killer Michael Stone tried to use the art defence three decades later, he was laughed out of court and sent back to prison.

Stone began painting while serving a 30- year prison sentence for the 1988 Milltown cemetery murders. He was released on licence as part of the Good Friday Agreement, and held exhibitions of his work. In 2006 he went to Stormont armed with knives, an axe and explosive fireworks. Arrested for the attempted murders of Gerry Adams and Martin McGuinness, he claimed it was performance art. He was returned to prison in 2013.

Would Stone have received more leniency if his art had been better? Possibly not, although genius does seem to allow for special dispensation. But if Stone’s “intervention” (art jargon) was not art because its alleged intent was to harm another, what about Spain’s Santiago Sierra, who paid heroin-addicted prostitutes the price of a fix to have a line tattooed across their backs in 160 Cm Line Tattooed on 4 People (2000)?

While artists may court controversy, it can go too far. Sierra’s 245 cubic metres (2006), a homemade gas chamber installed in a former synagogue in Germany, ignited enough outrage to be shut down. But is this a knee-jerk response from those who seem to enjoy, and sometimes make a living from, existing in a permanent state of outrage?

Sierra is capable of great subtlety, and while some of his works may seem exploitative, they also explore the far greater outrages of injustice and inequality that enable the wealthy to go into galleries and spend vast sums of money. This week, for example, Picasso’s Women of Algiers (1955) was sold for $179.4 million (€159.8 million) at a Christie’s auction estimated to have generated $1 billion.

Exhibit B (2014), was another casualty of a wave of outrage that ignored the work’s more interesting issues. South African artist Brett Bailey’s series of live installations at London’s Barbican examined slavery, dehumanisation and the origins of contemporary racism. Exhibit B featured black actors in chains in settings recalling the human zoos and ethnographic exhibitions that were popular in the 19th and early 20th centuries.

Exhibit B was closed following protests; it is possible that some found it simply too difficult to witness.

Shock for the sake of it

Christoph Büchel’s Biennale work is deliberately provocative, but like all effective “ Shock Art” it contains a level of subtlety.

But before you demand the censorship or closure of something that stirs up uncomfortable ideas and feelings, think again and consider: is this a conversation that needs to happen? If that’s the case, the art is doing its job.