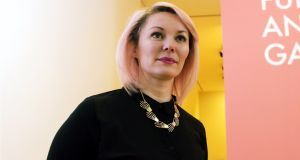 The artist Jesse Jones has been selected to represent Ireland at the 57th Venice Biennale next year. Jones will work with the actress Olwen Fouéré as a performer and with Project Arts Centre visual arts curator Tessa Giblin as commissioner.

Jones’s proposal for Venice is that she makes an artwork that explores the idea of “national representation at Venice as an alternative site of the state”. What form that work might take is anyone’s guess. While the Dublin-born artist has shown a particular liking for film in her career to date, she works across a wide range of forms and media, usually involving collaboration with a diversity of groups and individuals.

At the heart of everything she does is her interest in articulating hidden currents of dissent running beneath the calm cultural surface, historically and in relation to the current moment.

She completed an MA in visual arts practice at DLIADT in 2005, is based in Dublin and has worked and exhibited extensively at home and abroad. An adept theoretician, she is an articulate and persuasive speaker, has a wide following in the art world and is close to being a charismatic figure for a large part of the younger generation of Irish artists.

Her Trilogy of Dust films, each located in an environmentally extreme landscape, speculate on post-apocalyptic futures while employing generic theatrical and cinematic conventions in a mannerised way.

Current work
Jones’s current installation at the Dublin City Gallery, The Hugh Lane, ‘No More Fun and Games’, juxtaposes works by women from the gallery collection with a performative installation. Each day, collaborators manoeuvre a vast image of an outstretched arm, printed onto suspended fabric – a mobile cinema screen – through the rooms. The moving screen alternately conceals and reveals the paintings on the walls. A specially commissioned composition by American Gerald Busby – who scored Robert Altman’s 1977 film 3 Women – plays throughout the gallery. Jones has in mind the undervaluation and lack of visibility of the work of women artists, and of women in wider historical narratives.

She is currently working with Sarah Browne on ‘In the Shadow of the State’, a project addressing the role of institutions of the nation state, especially the legislature and the judiciary, in controlling and regulating the female body.

Commissioned by Artangel, Create and Heart of Glass, it views the feminist dimension of the 1916 Rising as unfinished business for women in Ireland, and will manifest as a series of live events at relevant sites in Ireland the UK throughout the year.

- The 57th Venice Biennale, with Christine Macel as Director, is scheduled to run from May 13th to November 26th, 2017

The Books Quiz: Who wrote The Naked Lunch?
7