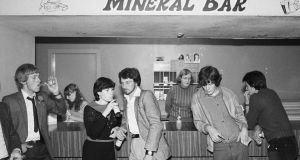 ‘A Fair Day’ from ‘So near and so far’, an exhibition of photographic prints by world-renowned British photographer Martin Parr at Roscommon Arts Centre. Photograph: Martin Parr/Magnum Photos 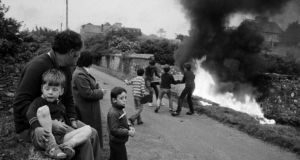 Image of St John’s Eve bonfire from ‘So near and so far’, an exhibition of photographic prints by British photographer Martin Parr at Roscommon Arts Centre. Photograph: Martin Parr/Magnum Photos 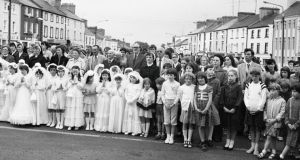 ‘Corpus Christi Procession’ from ‘So near and so far’, an exhibition of photographic prints by British photographer Martin Parr at Roscommon Arts Centre. Photograph: Martin Parr/Magnum Photos 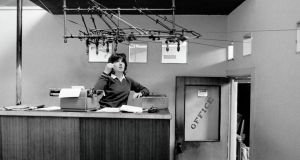 ‘Cash Railway Terminal’ from ‘So near and so far’, an exhibition of photographic prints by British photographer Martin Parr at Roscommon Arts Centre. Photograph: Martin Parr/Magnum Photos

Dolled-up dance-goers suck self-consciously on fizzy drinks in a ballroom in Glenfarne, Co Leitrim. A young office worker tussles with a bizarre-looking messaging contraption in Castlerea, Co Roscommon. And a television perches – incongruously but appropriately – on a table outside a pristine new bungalow in Keadue, also in Roscommon.

These and other intriguing images feature in So near and so far, an exhibition by acclaimed English photographer Martin Parr, which opened last night at Roscommon Arts Centre.

Taken during the time he lived in Boyle, Co Roscommon from 1980-83, the photographs represent a selection from the images that formed Parr’s third book, On a Fair Day (1984).

Now 64, Parr is one of the best-known documentary photographers of his generation, having published more than 90 books and edited 30 more. His work has been bought by museums including the Tate in London and New York’s Museum of Modern Art. He has spent decades exploring the peculiarities and juxtapositions of modern life, from dwindling rural communities in west Yorkshire to the experience of mass tourism across the world.

In later years, he deployed heightened, often garish colours and unusual perspectives to satirically counter what he calls the “propaganda” of most published images. When he took these photographs in the west of Ireland in the early 1980s he was still working in the preferred “art photography” mode of black and white. However, his sardonic eye for the peculiarities of the modern human condition was already apparent in pictures that combine humour and melancholy in equal measure.

The photographs show a place and a people teetering precariously between tradition and modernity, as they move from agrarian life to a new, brasher consumerism. At the time, the images may have seemed a rebuke to the sentimentalised view of the west of Ireland that dominated official discourse.

More than 30 years on, I suggest, the photographs look more than anything like the inspiration for the retro-kitsch humour of Father Ted and Moone Boy.

“You’re quite right, I don’t disagree with you at all,” says Parr amiably.

So near and so far: Roscommon in the 1980s continues at Roscommon Arts Centre until October 11th.