The Marble City was taken over by Saxon saxophonists, wearable sculptures, portrait painting and a focus on Bach 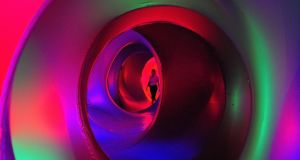 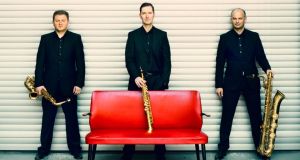 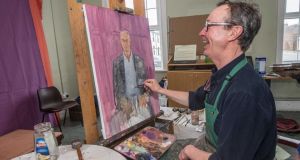 Punters queuing to get in to the opening concert at Kilkenny were somewhat disconcerted by the sight of an army lorry pulling up and two young chaps in camouflage gear dashing in the direction of St John’s Priory, armed with a sandbag apiece. Was the glorious sunshine about to be subsumed by a deluge? Had the river burst its banks? No. The soldiers ceremoniously deposited their sandbags at the back of the Kilkenny Arts Festival display boards. For ballast. The queue relaxed. It then transpired that the real drama was going on inside the church, where the harpsichord had taken a “humidity-related” conniption. Happily, it was restored to working order in time for the Iranian harpsichordist Mahan Esfahani to perform the first 24 of Bach’s 48 Preludes and Fugues, aka The Well-Tempered Clavier, at a dizzying pace.

Classical music audiences are incredibly well organised. They’ll turn up to garden operas in full evening dress with the libretto in one hand and a three-course picnic – complete with champagne flutes – in the other. The canny at Kilkenny brought cushions to St Canice’s Cathedral, and rain jackets to the pop-up outdoor concerts known as Secret Garden Music.

Even better-prepared, however, was trumpeter Shaun Hook, who materialised for his secret garden gig at Butler House bearing a baroque trumpet and a fistful of clothes pegs. He proceeded to peg his sheet music to the stand and charm everyone camped on the grass with his selection of bright and breezy tunes. The kids were impressed by Hook’s explanation that the trumpet began as a military instrument, used for rallying calls on the battlefield. Trumpeting, he added, wasn’t such a good profession in those days, as there was a good chance you’d get shot.

The opening weekend saw all manner of musical surprises pop up around Kilkenny, from a recital by the wonderful St Patrick’s Brass Band at the Tholsel to a Chinese girl playing what sounded like an erhu on High Street to the most beguiling buskers we’ve seen on the parade – or anywhere – in a long, long time, the young local jazz ensemble Amber and the Bear.

You’ve been through a break-up. It’s miserable, but there it is. You can’t go on, but you’re going on. Until your ex calls to see how you’re doing, and then it all comes tumbling out. The suspicion, the lies, the checking up and tracking back. In real life, that phone call is never a good idea. Musically, however, it makes for a brilliant short opera in the shape of Poulenc’s The Human Voice, and Opera Theatre Company’s new production at the Watergate Theatre, directed by Tom Creed and starring the soprano Kim Sheehan and pianist Michael McHale, was simple, to the point and found real beauty in this 60-minute modernist gem.

Who says Germans don’t have a sense of humour? For here were four Saxon saxophonists seriously proposing to play Bach’s Goldberg Variations on jazz instruments. As the light faded from the large windows of the Black Abbey, revealing red and blue spotlighting on the interior of the beautiful 13th-century building, there was a moment of doubt about the artistic validity of the endeavour. Was it a sub-rock gimmick? Or would it be magic? Anyone old enough to remember the outbreak of Moog-synthesised baroque beats from the 1980s was bound to be sceptical. But it turned out to be a smile-inducing evening that won Sax Allemande a standing ovation for their virtuosity, creativity and, yes, humour.

5 Portraits can be fun – and fast

Portrait painting has the reputation of being a terribly slow and serious business. Approaching the door of Mick O’Dea’s temporary studio at James Stephens Barracks, however, the sound of laughter could be heard from within, where O’Dea was at work on his portrait of the actor Barry McGovern. O’Dea revelled in his painting-at-the-speed-of-light project. “There’s an element of performance in it,” he said. “And I’m painting people that need to be painted.”

For McGovern he had chosen a priestly purple background. “He was calling me Your Grace, earlier,” said the actor, who will be seen on our screens in early 2016 playing Archbishop William Walsh in RTÉ’s commemorative historical drama Rebellion. Meanwhile McGovern can be seen for the remainder of the festival, on display around Kilkenny alongside O’Dea’s portraits of – among others – Iarla Ó Lionáird, Garry Hynes and Martin Hayes.

What if you could see the world through the eyes of a hammerhead shark, which wears its eyes about 2ft apart on either end of a walking stick across its nose? Or a chameleon, which can see forwards and backwards at the same time? Or a horse, which can see its own bum? (Think how handy that would be for, say, politicians). Anna Cleary and Denis Connolly’s Meta-Perceptual Helmets are “wearable sculptures” that look like über-cool cycling helmets made of gleaming chrome, but are supposed to give us pitiful humans the superhuman vision of animals.

People signed up in droves to have a go, including one lady who was walked through the visual processes of the hammerhead shark. “He sees two of everything,” said a festival volunteer. “Then, from farther away, he sees one. Can you see one of me now?” There was silence for a moment. Then the verdict emerged from beneath the helmet: “So basically, he’s blind.” Now that’s what we call meta-blunt.

You can dress it up any way you like. You can call it a luminarium, and talk about a labyrinth of domes and the influence of Islamic architecture. But at the end of the day – or even at the beginning of the day – Architects of Air’s giant inflatable sculpture, now an annual fixture on the lawns of Kilkenny Castle, is a great big colourful balloon that you can climb into. It’s warm, it’s bright, it hums softly to itself: no wonder Mirazozo attracts kids of all ages, wanting to escape to another, better world for a while. For a fiver: imagine.

8 The meaning of life

Lara Marlowe, of this parish, is very knowledgeable when it comes to matters Middle Eastern. So it was no surprise to find that her Hubert Butler Lecture on the rise of nationalism and jihadism, The Age of Unreason, was erudite, informative and beautifully composed. Nor was it too much of a stretch to hear her declare, when asked to elaborate on the phrase “the crisis of meaning”, that thanks to the triumph of neo-liberal capitalism, “we’re supposed to find meaning in social media and shopping malls”. Take that, Twitter: modern life encapsulated in 55 characters.

9 Festivals should be contrapuntal

Is there such a thing as too much Bach? Not according to Kilkenny’s artistic director, Eugene Downes. The focus on Beethoven at the 2014 festival got such a positive response, he said, that he decided to go all out this time around with Eternal Harmony, a series of more than 20 performances and talks on the life and work of Bach. “We should focus on what we can do best,” he told The Irish Times on the opening day of the festival. He wanted his programming to go deep, rather than flit from one event to another: the aim has been to create an immersive, multilayered, unfolding experience over a 10-day period. Which, when you think about it, is positively contrapuntal.