‘We are thought of as a thought-leadership brand’ 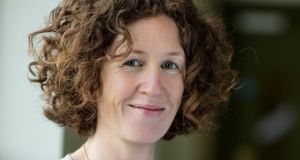 Meabh Quoirin: “Our philosophy is a driving principle of ‘science meets creativity’.”

Having joined Future Foundation in 2002, Meabh Quoirin has been managing director of the global consumer trends agency since 2010 and is a member of the board with responsibility for a team which manages over 150 corporate accounts.

Quoirin is currently overseeing the company’s further expansion into North American markets, a role which takes her back and forth to the US on a frequent basis.

Travel is inherent to Quoirin’s job; she flies regularly to speak at conferences globally and has worked in various locations in France (for seven years) as well as in Germany and the US.

She currently lives in Balham in London and works in the city’s Whitechapel district – “an artsy, exploding area that is urban and noisy”.

“I run the business with CEO Christophe Jouan and all the staff report to either him or me,” says Quoirin, “A lot of the nine-to-five is about supporting the teams and delivering client work.”

As a forecasting agency, much of the work of Quoirin and her team is brain storming, debating, analysing data, developing hypotheses and helping clients form strategies for the future.

The company’s clients include those in fast-moving consumer goods, retail, charity and automotive industries.

“We are thought of as a thought-leadership brand and so we talk at conferences where our clients are in the room. Our philosophy is a driving principle of ‘science meets creativity’,” says Quoirin.

The Belfast native and mother of three currently works a four-day week.

“I leave the office hyperventilating at 5.05pm, cycle home, the nanny clocks off at 6pm and then three young things jump into my arms,” she says. “The eldest is 10 and the youngest is four and they all have different needs so there’s homework and so on.

“My husband is French so we eat late, we like to drink wine and then I pick up a poetry book, catch up on the news or watch a box set of something like True Detective or House of Cards.”

Once or twice a week she might go to a wine tasting or a jazz concert and she dedicates one hour on a Friday morning to her pilates class.

“I come out with lots of ideas after that one hour of thinking about nothing,” she says.

Quoirin says while she dreads the logistics of travel and the run-up to it in terms of organising her home life, once she reaches her destination that she finds it hugely satisfying, massively enjoys the culture and finds that it is great for making the business better.

With the company making inroads into the US in a significant way, she was tempted to move the family to the New York office, but says that “the heartland of the business is still in London and it’s a fairly new business, so I decided to stay in London while an American member of staff runs the New York office”.

She travels to the States every four to six weeks: “Sometimes that can be to NY, to LA to speak at a conference or to an event like the SXSW festival. It’s incredibly stimulating.”

She also says she is “immensely privileged to get home to Dublin or Belfast” once a month.

Throughout her career Quoirin has worked in France, Germany and in New York, and she believes there are some differences to the working cultures of each of those places.

“I would say London and Dublin have strong social cultures running through working life so that you have friends in work, you meet people from work outside of work and your identity within that scenario is critical,” she says.

She believes people working in France have “a much more distant working relationship with their colleagues”.

“It is more process-led, and they tend to do very long hours in work and then have serious amounts of holidays when they are not working.”

New York, she says is “always on and somewhere in between the two”.

“The degree to which everything becomes absorbed into work is extraordinary there. People don’t have holidays, your entire life is run through your work.”

Ultimately, she believes the working life of London or Dublin is the healthiest option. “You can have a little bit of everything,” she says.

Quoirin says she always assumed she would “come home to roost”. She says she was unsure about starting a family in London but the fact that two of her siblings live in the city means she can have some kind of a home-from-home.

She believes London is a terrific place to rear a family and that, while the size of the city might be daunting, in reality it “is a series of villages”.

While the local nature of her kids’ upbringing in some ways mirrors her own, she says that as a child growing up in Belfast “everyone had to fit in” and “there were strong boundaries that you didn’t cross”.

She loves that in London anything goes and that it’s cool to be different (while acknowledging that Belfast is now “one of the coolest places to be”).

“My children can step in and out of any of our three cultures (Irish, French, English) and embrace the world from our tiny village of Balham. And to be able to grow up, without even thinking about that, is an immense privilege.”

1 Bogus notion that supply will cure our housing woes
2 Suspicions rife as key Brexit trade talks begin in Brussels
3 Corona beer firm reeling after 8% slide due to coronavirus
4 Irish companies restrict travel over coronavirus fears
5 Bank leaked my loan request to family who tried to rip me off
6 Life as a Facebook moderator: ‘People are awful. This is what my job has taught me’
7 How well paid do you think you are? Here’s how to work it out
8 Why Irish banks are now looking beyond vulture funds on problem loans
9 High time: Netherlands moves to clean up absurd cannabis policy
10 Coronavirus wipes €6.7bn off value of shares in Dublin
Real news has value SUBSCRIBE