What to do if asked to break work rules 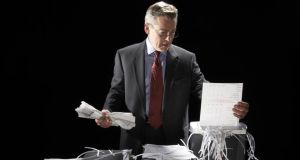 When asked to break the rules at work, most of us experience conflict. Do we go along to get along or do we resist?

All of us, at some point or another, are asked to break the rules at work. It may be a small action, like rounding up or down in an accounts ledger, or a small inaction, like looking the other way while others do so.

Or it may be a norm, like when we were encouraged by the nursing staff at a hospital we work for to sign in for other employees who were absent.

When asked to break the rules at work, most of us experience conflict. Do we go along to get along or do we resist? How we address such disputes can have serious consequences for us and our organisations.

We recommend an approach we call “principled rebellion”. This is an active and deliberate choice to rebel at work incrementally and strategically in order to minimise harm with maximum integrity.

Here are some tactics to keep in mind:

1 “I’m concerned about you.” The first step should be to appeal to the self-interest of those in charge. It’s possible they are unaware of the implications of what they are suggesting. So exploring their requests, and framing them in terms of the potential costs and implications for them, is a good way to test the waters.

This also signals your discomfort and gives them a way to quietly withdraw their demands without losing face.

2 Appeal to their better angels: Most of us like to believe that we are essentially decent people. Emphasising what seems fair and decent, particularly if those in charge are caught up in their more banal intentions, can help to increase their dissonance.

3 Just say no: If what you are being asked to do is sufficiently unethical, immoral or illegal, then your sincere refusal may be enough to worry or intimidate them into backing off and reconsidering their demands.

4 Just say no louder: When this doesn’t work, it’s time to turn the volume up by bringing in others. This can mean speaking with friends and colleagues and getting their advice and support. If this is not possible without putting them in jeopardy, then it might be time to speak to your supervisor or human resources.

5 Broadcast no: When tactics 1–4 don’t work, it is time to consider blowing the whistle outside. Researchers have found that whistle-blowers are more likely to be effective if they have high credibility within the organisation and forgo anonymity and identify themselves at the outset of the proceedings.

6 Increase your numbers: Another tactic is to change the power dynamic at work by gathering allies. This might mean organising several people from a department to go to a manager together to express concerns.

7 Take power: If all else fails, it may be time for direct legal action. This tactic, obviously, is the most costly. But it should always be considered as a backup plan should all else fail.

Peter Coleman is professor of psychology and education at Columbia University. Robert Ferguson is a psychologist, management consultant, executive coach and author.

Why bosses should not be afraid of speaking out on Instagram 02:15
North’s consumers will be ‘hardest hit’ if UK fails to secure EU deal 01:22
Cross border trade reached all time high of €7.4bn in 2018 01:22
Irish economy to grow by 3.4% this year, predicts EY 00:01
Belfast Harbour seeks to develop six new film and television studios 00:01