Turn potential into something lasting

The Potentialife programme aims to bring out the best in businesspeople 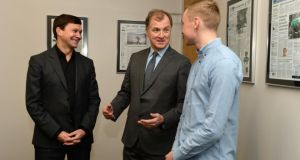 Angus Ridgeway of Potentialife, Hugo MacNeill of Goldman Sachs and Tim Arnold of Hailo at the ‘Be Your Best’ workshop in the ‘Irish Times’ offices. Photograph: Dara Mac Dónaill/The Irish Times

As a lecturer at Harvard, Ben-Shahar created the most popular course in the university’s history.

Despite ground-breaking work by thinkers such as Daniel Goleman (Emotional Intelligence) and Peter Drucker, the Austrian-born management consultant, educator and author who helped create the philosophical foundations of the current concept of “leadership”, programmes that attempt to teach the practise of positive leadership have had mixed success.

Many participants felt no change, Ben-Shahar told the Be Your Best/Potentialife seminar in the Irish Times offices and many more experienced a “honeymoon period” after which enthusiasm dropped off.

Ben-Shahar told the 40 Irish participants in the nine-month change-your-life leadership programme, with high-flyers from business and sport – including Web Summit founder Paddy Cosgrave and rugby player Rob Kearney – launched this week by The Irish Times, that, rather than leave the field, he became inspired to create one that actually worked. Around this time, he met former McKinsey partner Angus Ridgway, a management consultant, who shared his frustrations.

The two have created Potentialife, a leadership programme based on scientific research that promises long-lasting life-changing effects. Creating leaders who contribute positively to their workplaces and to the world around them was their goal, and they resolved that this could be done successfully only when based on sound scientific research.

Potentialife is an app that promises to help leaders become happier and thereby better motivate those around them. Over 30 weeks, participants attend three seminars (or webinars in some cases), while constantly feeding their experiences and reactions to them into an algorithm that gives them realistic feedback about how effective they actually are. The programme encourages existing strengths and the development of new positive behaviours, changing neural pathways.

“Disaggregation” is a catchword of the programme. What it means is that there are no traditional careers and jobs any more. People in their 20s and early 30s will have 35 “jobs” or more in their lifetimes, compared to one or two for people in their late 50s and 60s. Survival in this type of environment is about being as effective a leader as you can be, with as much energy and health as you are capable of, according to Ben-Shahar.

Bryan Bourke, managing partner of corporate law firm William Fry, has initially rolled out Potentialife to 70 partners in Dublin. “The launch itself to the first cohort of people (and this is true also of the second launch to a group of 30 associates) was very powerful. Angus Ridgway has a very professional, skilled delivery style and clearly has years of experience taking people though the challenges, nuances and opportunities of leadership,” says Bourke.

“The launch session itself starts a positive momentum. In today’s world, with work pressures as well as demands outside the office, it is easy to lose sight of the things that make us perform best in and out of work, and that has probably been even more so since the financial crisis. The benefits of real engagement and bringing energy to our work and our lives generally are well proven.”

One of the things that appeals to him about Potentialife is that it rolls out over a protracted period of time – 30 weeks – during which participants receive constant feedback. The time commitment is one hour per week where participants are asked to evaluate and question their habits and feelings.

This is designed to drive and reinforce change – and make it last, according to Potentialife’s creators.

“People are given ample opportunity to pick up pointers from the data they provide about themselves and from feedback from others,” Bourke says. “[William] Fry is a third of the way through the 30-week programme, but we are already seeing results.

“There has been an immediate, very positive reaction from the participants and, I believe, an increased awareness of the important issues around engagement.”

Ben-Shahar and Ridgway explain that “the increasing pace of technological and organisational change and workplace disaggregation mean that, more than ever before, there is space for expression within organisations.

“This space is oxygen that allows more creativity, initiative, engagement . . . in short, more space for leadership. And this doesn’t just apply at the top of the organisation, but to every single level from the chief executive to the machine operators.

“In fact, those organisations that are able to develop leadership behaviours ‘at scale’ have a distinct competitive advantage. By positively setting your people alight with higher levels of energy, engagement, creativity, productivity and purpose you can not only enable your business strategy but shape it.”

Former Irish rugby international Hugo MacNeill, who is Ireland managing director of Goldman Sachs, says his reason for joining the Potentialife programme through The Irish Times is that he has “ always been fascinated by leadership from my sporting days, when I saw examples of good captains and bad captains and what made the difference. And I know the importance of leadership through trying to be a good captain myself.

“In business, I have also seen examples of good and bad leaders. It is a major differentiating factor between organisations.”

Mark Pollock, explorer and collaboration catalyst, says: “At the Mark Pollock Trust, we are on a mission to find and connect people worldwide to fast-track a cure for paralysis. But there has been a 100 per cent failure rate up to this point in history to find total cures for spinal cord injury.

“We believe that it will require collaboration across organisations, disciplines and geographies to achieve victories over paralysis.

“And, as we pursue our goals we must be curious and open to learning. That is why I am so excited about taking part in this Potentialife Leadership Programme over the next nine months.”

A hand-picked group of Irish Times readers – out of hundreds who applied – are also taking place in Potentialife, and The Irish Times will be following their progress over the next 30 weeks and writing about them on the Irish Times microsite, Be Your Best.

Irish Times journalists Roisín Ingle, Conn Ó Midheach and I are also taking the course. We will be blogging about our own progress at Be Your Best and tweeting using the hashtag #ITBeYourBest.