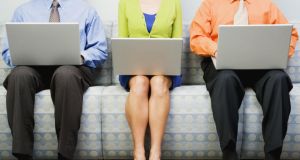 The gender gap in tech is not only a missed opportunity for women, but for businesses as well

A skills shortage in the technology industry is looming, both here and abroad, with the number of predicted job vacancies growing and concern mounting over whether there will be enough qualified workers to fill them.

Last year, the Government announced plans to fill 44,500 jobs in information and communications technology (ICT) by 2018. Extra college places in ICT have been created to meet industry demands.

The European Commission estimates that, due to a lack of skilled digital technology experts, there could be up to 825,000 vacancies for ICT professionals in Europe by 2020.

In the United States, there will be a projected 1.4 million unfilled computer science-related jobs by 2020 and only 400,000 computer science graduates with the skills to apply for them.

The discussion has turned to the much-publicised gender gap in tech – it is not only a missed opportunity for women, but for businesses as well.

Prof Hinchey called for a review of the teaching of maths and tech to make the subjects more interesting to girls.

“There is no reason why women cannot be as successful as men in computing, but evidence suggests that many girls are turned off at an early age by its geeky, anti-social, overly masculine, nerdy image,” he said in a statement.

Lero ran a computing camp for teenage girls in Limerick this summer, and there are many other initiatives to attract women to Stem subjects and careers.

Mary Carty, co-founder of Outbox, the first-ever Stem incubator for entrepreneurial young women aged 11-22, is surprised the project is the first of its kind.

Carty thinks “the perception that certain careers are exclusively male”, along with the “princess culture” and “pinkification” of little girls, which refers to clothing and toy companies selling gender roles to girls along with their merchandise, all play a part.

“It’s hard for girls to break out of that box. I’ve heard girls say to me time and time again, ‘My friends think I’m weird because I like Stem or coding’.”

Carty, a tech founder herself, says she has noticed more women in the Irish start-up scene over the last 10 years and cites female founders programmes at both Enterprise Ireland and the NDRC (National Digital Research Centre) as initiatives necessary to effect change.

“We have to support each other, mentor each other. Our male colleagues also have to be supportive,” she says.

Over the summer, a photo of San Francisco-based platform engineer Isis Wenger was featured in her employer’s recruiting campaign. Some of her OneLogin co-workers also appeared in the ads, but it was Wenger’s picture that caused chatter online.

The idea of a young, attractive platform engineer was too much for some to compute. One comment on Facebook read: “But I’m curious people with brains find this quote remotely plausible and if women in particular buy this image of what a female software engineer looks like.”

That was enough for Wenger. She uploaded a photo of herself to Twitter, with the hashtag #ILookLikeAnEngineer.

The hashtag has since become a campaign, generating more than 75,000 tweets that challenge the stereotype of what people in Stem are expected to look like. But Wenger does not think the campaign should be for women only. In a recent article in the Washington Post, Wenger wrote that the hashtag is “intentionally radically inclusive” and “not just about women”.

“Labelling this as a ‘campaign for women’ is very limiting, and will only further separate us from everyone else in the community,” she wrote. “Fighting exclusion with exclusion will not help us get closer to forming a solution.”

Pauline Sargent, founder of DigiWomen, an organisation for female makers and users of technology, says she has experienced this separation first-hand.

“Women are constantly talking about women not being in tech. No one has rung me up to ask me about digital marketing, but they do ring me up to talk about DigiWomen and women in tech,” she says.

Sargent thinks that changing the perception of what “a techie” is will clear at least one of the obstacles to gender parity in the industry.

She has seen successful female entrepreneurs not apply for tech funding or initiatives because of that perception.

“A lot of women are doing great things in the area of fashion and the food industry, but it all comes back to levels of tech. How hardcore are you supposed to be before being considered a techie?”

Sargent says thinking about tech differently “opens doors” and, while “more esteem is put into certain areas of tech than others”, tech is a part of almost every business.

Leonora O’Brien, founder and chief executive of Pharmapod, thinks women-only groups and grants might not be necessary in future because of changing attitudes.

“In a few years, Enterprise Ireland won’t need to have grants for women. Because of female networking events, there are many more women role models, and that is self-perpetuating.

“I think the activity and momentum around female-led initiatives has been necessary to bridge the gap, but I definitely think you should get involved in both women-only and co-ed tech events.”

O’Brien says she makes sure to have a gender balance at Pharmapod, which develops software for the healthcare sector.

“When you have women at board level, revenues are higher. It’s been proven that improves the bottom line,” she says. According to the latest diversity stats, only 16 per cent of tech jobs at Yahoo and Facebook are held by women. At Google, the figure is 18 per cent.

“We want women working in tech because that’s where the jobs are. I would hate to see women disadvantaged because they don’t have the same career opportunities as men. That would set us back,” says Irish Internet Association chief executive Joan Mulvihill.

“People are talking about women in tech because tech is suffering from a skills shortage at the moment. If you’re in an industry with a skills shortage, you want to be sure you’re pulling from the widest possible pool. You need to be able to draw from 100 per cent of the population, not just 50 per cent. We can’t undo generations of phenomenal work by the women before us by leaving ourselves out of the biggest growth sector.”

Mulvihill says it is worth both debating the issue and investing energy, time and resources into encouraging girls to take Stem subjects, which will give them opportunities in any sector.

“Part of the way to get girls into tech is telling them we really want them, and they’re welcome in the sector. And they’ll have fabulous, creative and interesting careers,” she says.