Sky is the limit for time off as Indeed.com lifts cap on holidays

‘When people disconnect, they come back with a fresher perspective’ says jobs company 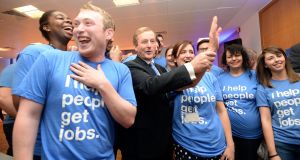 Coming back to work after the Christmas break can be tough. Unless you work for jobs website Indeed.com.

The company has decided to remove limits on the amount of holiday time its 230 Irish employees can take each year in the hope it will boost creativity and productivity.

The company, which last year announced it was hiring 300 additional staff in Ireland, has emailed all staff saying “there will no longer be a cap on the amount of time off you can take”.

“We recognise that there are incredible benefits to occasionally taking a step back to recharge, including better physical and mental health, closer relationships, increased productivity, new and fresh perspectives, and more,” Indeed senior vice-president for human resources Paul Wolfe told staff.

As of January 1st, the company has moved to open vacation arrangements to better allow employees take time off when they need it.

Mr Wolfe said employees would still need permission from their manager, to prevent a scenario where all members of a team take the same week off. However, while employees might not always get the specific week off they want, there will be no cap on holiday time.

“We want to allow people to take time off when they need it so they can recharge and come back and do better . . . research shows that when people disconnect, they come back with a fresher perspective, newer ideas and a more robust approach,” he said.

“The important thing is not to look at how much time off people take, its to look at who isn’t taking time off and why,” he added.

The company recently announced it would relocate its Irish operation to St Stephen’s Green in Dublin and would double the size of its workforce in Ireland over the next two years.