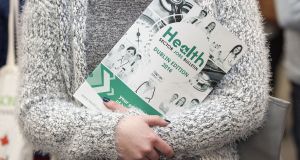 Some 20.8 per cent of those working in the health and social work sectors were the most likely to report being “always” under pressure. Photograph: Dave Meehan

More than a third of Irish workers say they are “always or often” under pressure at work, according to the Central Statistics Office (CSO).

Those working in the health and social work sectors were the most likely to report being “always” under pressure (20.8 per cent) while those working in sectors such as the arts, entertainment and recreation activities were the least likely, at 9.6 per cent.

As part of a recent Labour Force Survey, the CSO asked additional questions relating to job autonomy and pressure at work.

At 15.4 per cent, the percentage of workers who reported they were “always” under pressure at work was higher than the average for the EU27 at 11 per cent.

The survey found people with atypical working patterns were more likely to work “always or often” under time pressure (38.7 per cent) than those working normal patterns (33 per cent).

At 24.9 per cent, the percentage of workers in Ireland who reported that they were “never” under pressure was slightly higher than the average for the EU27 at 22.2 per cent.

Ireland also ranked third-highest of EU member states for job autonomy with almost two-thirds of workers saying they had some or a large influence on the content and order of tasks (63.8 per cent) compared with half of those employed in the EU27 (49.6 per cent).

Men working here were more likely to have autonomy (66.7 per cent) than women (61 per cent).

The CSO noted that the gender gap in this area was smaller in the EU27 with rates of 50.8 per cent for men and 48.3 per cent for women respectively.

Those working as managers, directors and senior officials were the most likely to report having had some or a large influence on the content and order of tasks (89.3 per cent) while those working in so-called elementary occupations, such as labourers or domestic helpers and cleaners, were the least likely at 39.9 per cent, the CSO said.

Almost 40 per cent of employees here were likely to have their hours worked recorded automatically, which was slightly higher than the corresponding figure for the EU27 of 33.1 per cent.