New survey shows that we are getting worked up about work

Half of working population value positive environment over financial rewards 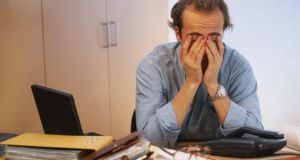 Hard work: the reluctance to hit the office is often down to a negative and poisonous atmosphere in the workplace

More than a third of workers dread turning up for work, according to a survey carried out recently among 1,000 employees across the State.

We know what you’re thinking: not surprising. Work, after all, is not everyone’s cup of tea.

In this case, though, the reason for the reluctance to hit the office is down to a negative and poisonous atmosphere in the workplace. The survey carried out by Ignite for Michael Dawson’s gift card group One4All shows that more than half of the working population (53 per cent) values a positive work environment, claiming it is even more important than financial rewards.

Mind you, that won’t stop the 50 per cent of employees who admit they can be wooed by monetary rewards and will leave their current role for better compensation and benefits.

And to that confused 3 per cent cohort who answered in the affirmative to both of these contradictory positions, don’t call us, we’ll call you.

When it comes to pay and perks, more than three-quarters of respondents say they would prefer to be rewarded for great work more frequently, rather than waiting for a big, once-a-year traditional performance review bonus.

And speaking of rewards, teamwork doesn’t cut it. Despite management enthusiasm for cross-departmental action teams and the like, only 43 per cent of workers surveyed say they were motivated to work harder when part of group reward schemes.

Conversely, close to two-thirds (62 per cent) say they are driven to succeed more when they are in control of their own personal performance.

Still, it’s not all bad news for employers, with almost half of all those surveyed (46 per cent) saying they head into a happy and positive office each day.

US retailers step up security and close stores after looting 17:42
ECB set to expand bond-buying to soak up debt 17:39
Four different lawyers paid over €500,000 each in Apple tax case 17:15
Thailand attempts to lure travellers with luxurious lockdown options 16:33
MyWallSt to provide investment app for online university in US 15:32

1 Irish comic book artist designs face mask coverings for young flyers
2 Parts of Brown Thomas and Arnotts to reopen next week
3 Should my mam wait for house prices to drop before buying?
4 Four different lawyers paid over €500,000 each in Apple tax case
5 Thailand attempts to lure travellers with luxurious lockdown options
6 Brother is dragging his heels as executor of uncle’s will - is there anything I can do?
7 Irish whiskey sales near milestone of 12m cases a year
8 ‘I have a talent for justifying purchases’
9 Hangover for the drinks sector as pint sales go flat
10 Covid-19 mortgage breaks: What’s the catch?
Real news has value SUBSCRIBE