Inside Microsoft’s new Dublin home: an LED waterfall, a digital lake and a DreamSpace

One Microsoft Place in Leopardstown officially opened by Taoiseach

Join Caithriona Hallahan MD of Microsoft Ireland for a tour of the beautiful new Microsoft Ireland Campus in Leopardstown. The building features five restaurants, a gymnasium and yoga room and many other unique features. Video: Bryan O’Brien 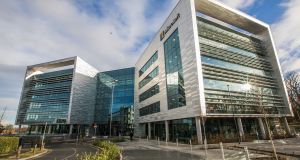 The exterior of One Microsoft Place, a manifestation of Microsoft’s cultural shift towards ‘one Microsoft’ 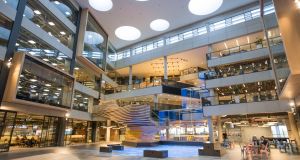 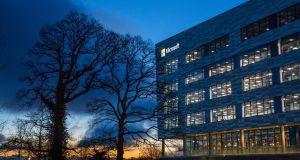 The building was designed to reflect aspects of Dublin 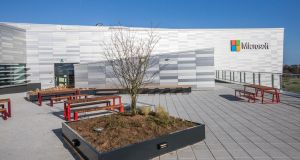 A roof terrace at One Microsoft Place 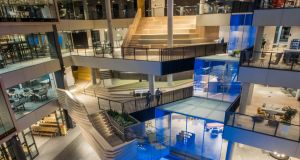 The digital lake and LED waterfall at One Microsoft Place 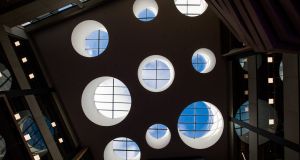 Rainwater collected from the roof is used throughout the building

An LED waterfall and digital lake, an indoor “mountain” and a “DreamSpace” for teaching the next generation about technology: One Microsoft Place has officially opened in Dublin.

The building marks another step in Microsoft’s cultural shift towards “one Microsoft”, with data scientists, AI bot builders and mixed reality game developers sitting alongside sales and marketing staff.

“The building is the physical manifestation of the cultural transformation we’ve been going through,” said Ms Hallahan. “It’s about pulling together the skills and talent and passion of staff to enable the mission of Microsoft.”

The building itself has 3,000 seats spread across open-plan floors and smaller private areas where meetings or phone calls can be conducted. Designed by RKD Architects and Gensler, with BAM as the lead contractor working with Jones Engineering, the building bears a lot of Dublin’s influence, such as through the digital lake and “mountain” representing the bay and hills that border the building. But each area is decorated differently, intended to reflect the 71 nationalities that are working in the Dublin office.

“Technology is rapidly changing how we live, work and play and Microsoft is a major force in driving this change,” said Ms Johnson. “This wonderful new building creates the opportunity for the Irish based team to do more together by facilitating development, innovation and creativity.”

The “neighbourhoods” created by the different areas are intended to encourage a new way of working for Microsoft employees. There are no official offices; executives sit in the same space as interns. Ms Hallahan said that decision has already begun to pay off for the company, encouraging teams to mix and potentially work on projects together that may never have considered it before.

“People have said it is like working for a new company,” said Ms Hallahan.

The tech firm offers the usual perks you expect from such companies: an on-site gym, where even the weights bear Microsoft Windows logos; treatment rooms for massages and other treatments; a studio where yoga classes are run alongside mindfulness sessions; a music room; and a podcast room.

Unlike some tech companies, Microsoft doesn’t offer free meals throughout the work day, preferring to subsidise the food instead.

The new building has food options from a street cafe style establishment to salad, the “chef’s table” and its own pizza kitchen. Microsoft has its own coffee blend roasted on site, and an inhouse bakery.

The environmental aspects to the building have also been heavily considered.

Rainwater collected from the roof is used throughout the building, while spices and other food items are grown for use in the building’s eateries. Bee hives on the roof of the building, where the view stretches from Dublin Bay to the mountains, will eventually be used to harvest honey.

DreamSpace is the heart of the campus, an innovation and education hub that aims to host 100,000 primary and transition year students over the next four years. Microsoft invested €5 million in its development, and intends to open it to the public in April.

“We have to meet them where they are, it’s not just about coding,” Ms Hallahan said.

Speaking at the opening of the building, Mr Varadkar praised Microsoft’s record in Ireland.

“Microsoft has been working with organisations throughout the world to help them maximise the opportunities presented by digital transformation and the cloud. The Irish based team has been central to that work and has a long track record of driving innovation and change,” he said. “ I am confident that this new campus will provide the perfect backdrop to the continued work of Microsoft as the team of talented people drive innovation and technical breakthroughs that we will all benefit from both now and in the years to come.”