Case became a focus for anger over behaviour of privileged elites 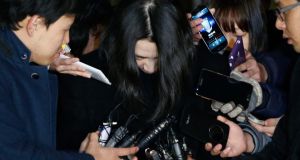 Heather Cho, daughter of chairman of Korean Air Lines Cho Yang-ho, is surrounded by the media as she leaves for a detention facility after a court ordered her to be detained, at the Seoul Western District Prosecutor’s office. Photograph: Kim Hong-Ji/Reuters

A former vice-president of South Korea’s national carrier has been jailed for a year for obstructing aviation safety during a row over the way macadamia nuts were served in the first-class cabin.

Heather Cho, daughter of the airline’s chairman, forced the aircraft to return to the gate at New York’s John F Kennedy airport last December and offload the head steward, Park Chang-Jin, because she had been offered the nuts in a bag rather than a bowl.

A Seoul district court found her guilty of diverting an aircraft, a violation of aviation safety law.

Cho admitted to verbal and physical violence, throwing a service manual on the floor and to pushing one of the female flight attendants with her finger. Judge Oh Sung-woo said it was a case where “human dignity” had been “trampled upon”.

The case had become a focus for public anger at the arrogant behaviour of the top families running the chaebols, the powerful industrial conglomerates that dominate the Korean economy.