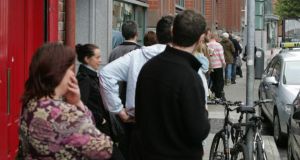 Queueing for a living: Dublin’s Northside Partnership, which operates in an area covering 130,000 people, has been singled out for praise for its approach to dealing with the long-term unemployed. Photograph: Frank Miller/The Irish Times

It has taken a while, but the European Union has finally woken up to the need to take action to deal with the crisis of long-term unemployment.

The European Commission recently announced a major proposal to tackle the problem, which doubled in scale between 2007 and 2014, by reducing the rate by at least five million people.

According to recent Eurostat figures, the number of people classed as long-term unemployed (without work for at least 12 months) is 12.1 million, which is about half of all those not currently working across the EU. The statistics show 61 per cent of the long-term unemployed have been without a job for at least two years and more than 12 per cent for more than four years.

“We see that economic recovery is becoming evident, and this is slowly translating into jobs. This summer we had the lowest unemployment rate in Europe for four years for the Euro-28, but there are still too many people out of work,” Thyssen told journalists at a recent briefing in Brussels.

“The longer people remain unemployed, the lower their chances of getting hired again. That is why urgent action is needed because there is a risk that some people will be left behind even when the economy is fully recovered.”

Despite what some rabid right-wing UK tabloids might have you believe, very few people have an easy life on the dole.

“Long-term unemployment is a very serious problem and has a devastating effect on those who experience it,” says Prof Hugh Frazer, adjunct professor in the Department of Applied Social Studies in Maynooth University, and co-ordinator of the European Social Policy Network, which advises the European Commission.

“Long-term unemployment leads to deepening levels of poverty and social exclusion. People end up being at more risk of bad health and very often for those who have been unemployed for a long period of time, there is a loss of skills and of self-confidence. It all adds up to an erosion of human and social capital over time.”

That study indicates that measures put in place are often too limited or too narrowly focused to assist those out of work. It recommends a more holistic response which recognises the many obstacles that the long-term unemployed face in returning to the workforce.

Matthias Borscheid, manager of Northside Partnership’s social inclusion and community activation programme, says not being in work is only one of the issues facing the long-term unemployed. He says most of the measures introduced in Ireland and Europe in recent years to help the unemployed are mainly targeted at those who are “job-ready,” that is in a position to get back to work once jobs are available.

“The economy is picking up and those who have the skills to get work do quickly. The system as it currently works is designed to support those who can find work fast,” Dr Borscheid says.

“It expects people who are classified as jobseekers to progress and participate, even though they might not be ready for work because they may have a whole range of issues from overcoming drug addiction to mental health issues.”

Dr Frazer also believes the longer you are unemployed, the more obstacles you face returning to work.

“If you’re going to support the long-term unemployed, you need to intensify and broaden the range of supports you provide. It’s not just enough to have generalised measures, you need to look in-depth at the particular problems facing them and provide a proper response,” he says.

In announcing its new plan, the European Commission is acknowledging that a more coherent approach is required.

The new proposal includes registration of all unemployed people in the EU with an employment service, detailed one-on-one assessments that could include psychological support and a so-called job integration agreement which sets out the obligations of both jobseekers and the employment service.

Member states will also be urged to adapt policies to encourage employers to take on individuals through financial incentives.

While some, if not all of the recommendations are already commonplace in many countries, approaches to addressing the issue of long-term unemployment differ greatly. In some member states, for example, almost all unemployed people are registered with state bodies, but in others the opposite is true.

Also, while some countries have job integration agreements that cover traditional forms of assistance such as help finding jobs or access to training, future ones might also provide assistance support for housing, transport, child and care services or rehabilitation.

Dr Borscheid welcomes the new plan and acknowledges that steps undertaken in Ireland in recent years to deal with the unemployment situation have been helpful.

However, he’s also a little sceptical about whether the introduction of Intreo, the ‘one-stop shop’ service launched by the Government in late 2012, to provide individualised supports to jobseekers is as ground-breaking as some would have you believe.

“The programme introduced by the Department of Social Protection was actually piloted by Northside Partnership in the mid-1990s and was based on a model we robbed from the Netherlands so to sell it as innovation is not really cutting it. But it is a progression,” he says.

The Northside Partnership, which operates in a catchment area covering 130,000 people in north Dublin, is one of the organisations that have been singled out for praise across the EU for its approach to dealing with the long-term unemployed.

It runs a number of programmes to help people get back to work including a labour market inclusion programme, which involves recovering drug addicts, and a start-your-own-business scheme that includes some individuals who have previously been active in the black economy, but want to be legitimate.

The partnership has also been highly successful in liaising with employers. It has placed 500 people in employment so far this year and nearly 1,000 into training. It has also placed an additional 200 individuals on work placement with local community organisations.

About 30 per cent of the people it works with progress into employment, a pretty impressive record given the issues that many of those involved with the partnership are grappling with.

“We’re dealing with those most distant to the labour market and who have a low probability of progressing into paid work. It takes time to work with the people we’re engaging with, because they have multiple issues,” says Dr Borscheid.

“There is a better awareness that those who are long-term unemployed are often dealing with a number of complex issues. But more needs to be done because I’m not sure if this is really understood to the degree it needs to be,” he said.

Dr Frazer says while things have undoubtedly improved in Ireland, there’s still considerable progress to be made.

“Things are definitely getting better. There’s more awareness now that it’s not enough to focus generally on unemployment and that we need to give particular attention to the long-term unemployed. One of the things that comes across from looking at Europe measures as a whole is the need for much better integration of services and in Ireland we don’t have a good record on this,” he said.

“You get good initiatives like the Northside Partnership which are doing great things on the ground but they are doing this almost in spite of the structures at the centre. We’re not great at connecting things up well and so more needs to be done in terms of this for us to achieve greater success in helping people get back to work.”