Business leaders learn to be their best at ‘Irish Times’ workshop 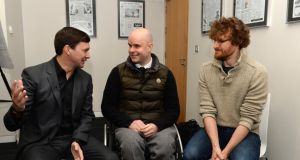 A group of Ireland’s business leaders gathered at The Irish Times to have their neural pathways realigned under the guidance of a Harvard behavioural psychology expert. There was a startled gasp from the 40 attendees as, with everyone downloading what promises to be a life-changing app, it was revealed that Paddy Cosgrave, entrepreneur and a founder of the Dublin Web Summit, doesn’t have email on his phone.

But Cosgrave paid close attention to the science behind positive change during the induction session into the nine-month programme, by Tal Ben-Shahar – who taught the most popular course at Harvard University history – and former McKinsey partner Angus Ridgway, both experts in leadership.

“Being told to count our strengths is the opposite of what I and almost every other child was brought up with,” said Cosgrave. “We grew up at the age of seven, going for ‘life coaching’ three times a week and being constantly told of our weaknesses – it was called confession.”

Food writer and television presenter Donal Skehan agreed. “Doing the programme gives a positive outlook to the next nine months and that will hopefully create habits of positivity.”

“It was very engaging and the summaries of the research on which it is based were very insightful and interesting. I’m looking forward to doing the program, to help me to be more disciplined about my personal development,” said Tim Arnold, general manager of Hailo Dublin.

Arthur Cummings, laser eye surgery specialist and director of the Wellington Clinic, said: “The programme has all the hallmarks of sound research principles and good research. I like what I’ve been hearing and look forward to the next nine months.”

“I was taken by the fact that it has worked with school kids for four years – that’s very powerful because you can’t fool kids,” said Gina Quin, chief executive of Dublin Chamber of Commerce. “Slightly daunted by the amount of time required,” she added, although at least the programme is on her phone, which she is rarely without.

For the next seven days, the 40 participants – including 12 hand-picked Irish Times readers – will be recording into their phones every activity of each 24-hour period and how they feel about it. The statistics will be fed into an algorithm that will send back personalised feedback, based on scientifically proven statistics on behavioural change. If it works, the participants’ brains will have been retrained to make them healthier, happier and more energised.

Potentialife is a confidential personalised change programme that claims to give sustained lifelong change by assisting participants to practise the habits of elite positive leaders both at work and in personal life. After the initial seven-day diary period, it takes about one hour an week over 30 weeks.