Why mastering the art of digital marketing will reap its rewards

More businesses are using the web and social media for marketing but their efforts are often stilted and awkward. What are they doing wrong? 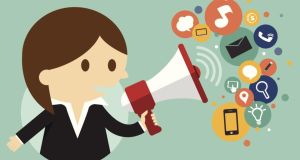 Digital marketing: There are fundamental differences between traditional and digital marketing that executives may find counter-intuitive, says Ian Dodson, founder of the Digital Marketing Institute

Research repeatedly shows Irish businesses to be laggards when it comes to e-commerce while clunky websites and ill-judged social media campaigns suggest they are struggling with the fundamentals of digital marketing. One consequence is a growing number of courses and consultants to teach anxious companies how to do better.

Any business feeling pressure to keep up will take encouragement from Dr Theo Lynn. He runs a course on digital marketing at DCU Business School but plays down its disruptive effect. “People forget that the fundamentals are the same. Marketing is still about segmentation, targeting and positioning,” he says. “The difference is that there’s a whole range of new armoury. You just have to work out what to use.”

He refutes the suggestion that it’s too difficult to plan campaigns in a shifting landscape, pointing out that email marketing has been around for a decade with plenty of evidence to show it works. Research by the Direct Marketing Association in the UK, published in February, shows the return on investment for email marketing in 2013 was 2,500 per cent – the equivalent of €25 for every €1 spent.

Lynn is a big fan of Twitter but wouldn’t recommend it as a starting point. “Social media is very sexy but not necessarily right for every organisation or the best investment of time and effort. There are too many problems with the data,” he says. Tools are available to analyse the sentiment behind tweets, for example, or “Likes” on a Facebook page, but they come with a complexity that is beyond most small firms.

A safer bet is to concentrate on the company website. It’s the virtual manifestation of a retail outlet or a company’s office, the funnel that brings people to your business. The goal, according to Lynn, is to “supercharge” traffic. Online you do this with social media – a Facebook page, Twitter account, or blog – using links to drive people to the website where more meaningful business transactions can occur.

“I’m always amazed that one of the first things companies do when you land on their website is send you off to their Facebook page or Twitter account,” he says. “Content should be the focus of your activity with social media and email as the distribution platform for that content. Drive them to a page with a call to action that leads to a conversation. That becomes your metric for measurement.”

One problem is that organisations spread themselves too thin in the digital world, trying too hard to suck up as much customer information as possible. Rather than get hung up on the tools required to achieve this, Lynn recommends a more traditional strategy: target your market segment, plan your positioning, and be clear about the business outcomes you are looking for.

Next, leverage the various facets of the digital world to achieve your goals. “It’s quantitative marketing,” he explains, using the web and social media for interactive research. “Once we know our segmentation we can see in real time the progress towards the outcomes. That’s something we couldn’t do in the past.”

Ian Dodson, founder of the Digital Marketing Institute, argues that there are fundamental differences between traditional and digital marketing that executives may find counter-intuitive. The traditional way of doing things is to “front load” a campaign; spend the money on a big splash across selected media then let it tail off and measure the results.

“Digital is the complete opposite. You try things on a small scale across various media. The whole approach to the campaign is responsive and reactive rather than assuming you know what people want. You double down on the marketing that works based on the responses you get,” he says.

Costs will go up rather than down as the campaign evolves but it becomes an informed investment so the return is greater. “Change your banner ads every few days and find the ones that work best. Digital marketing is about responding to how people react rather than broadcasting a big idea,” he says.

Dodson believes it’s the most transformative thing to happen to businesses for a century, one that challenges the status quo. “Most businesses in Ireland are run by middle-aged white men with 16-year-old children who tell them their company web site isn’t cool. There is a serious generational issue about who is at the top of businesses.”

The internet has switched the balance of power from companies, broadcasters and publishers to consumers, according to Dodson, and executives are terrified because they don’t know how to deal with it. They try desperately to give their brand a personality but struggle to relax their corporate sensibility.

Some executives are like rabbits in the headlights, so overwhelmed they choose to do nothing and give up on something as fundamental as search engine optimisation. A common defence is that it’s hard to play on a pitch where Google keeps moving the goalposts. Dodson shoots this one down. “Changes to algorithms make no difference whatsoever to the average business. Google is penalising ‘link buying’ and content farms that try to trick search engines,” he says.

He urges businesses to set about devising a long-term digital media strategy. “Tokenism will kill you on the internet. No one is going to interact or follow a firm that dips a toe in the water. Doing a little bit of social media every three months isn’t going to work,” he says.

He recommends taking on interns, social-media-savvy young people to get the ball rolling. “Let them do it for three or four months and I guarantee any 20-year-old worth their salt will make a job for themselves,” he says. “Digital marketing has a low barrier of entry. Find someone to do it for you then give them time and training.”

Theo Lynn agrees with the principle with one proviso: “If you want a superstar marketing person, you don’t take them on as interns, you pay them. The universities will produce 165 post-graduates this summer so there is no shortage of talent.”

QUOTE: Most businesses in Ireland are run by middle-aged white men with 16-year-old children who tell them their company web site isn’t cool