When the French clock off at 6pm, they really mean it 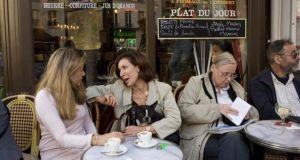 Relaxing in a French cafe, untroubled by work emails.

Just in case you weren’t jealous enough of the French already, what with their effortless style, lovely accents and collective will to calorie control, they have now just made it illegal to work after 6pm.

Well, sort of. Après noticing that the ability of bosses to invade their employees’ home lives via smartphone at any heure of the day or night was enabling real work hours to extend further and further beyond the 35-hour week the country famously introduced in 1999, workers’ unions have been fighting back.

Now employers’ federations and unions have signed a new, legally binding labour agreement that will require staff to switch off their phones after 6pm.

Under the deal, which affects a million employees in the technology and consultancy sectors (including the French arms of Google, Facebook, Deloitte and PwC), employees will also have to resist the temptation to look at work-related material on their computers or smartphones – or any other kind of malevolent intrusion into the time they have been nationally mandated to spend on whatever the French call la dolce vita.

And companies must ensure that their employees come under no pressure to do so. Thus the spirit of the law – and of France – as well as the letter shall be observed.

C’est all right pour some, quoi?