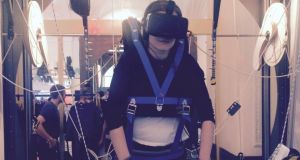 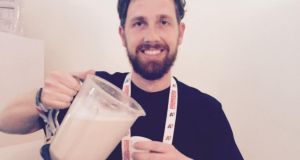 Jacob Krejcik of Czech start-up Heaven Labs, which is selling a version of Soylent called Mana: ‘People who’ve been trying it seem to be surprised at how tasty it is.’

It may not be as well-known as the Dublin Web Summit, but the Pioneers Festival in Vienna has plenty to offer for wannabe entrepreneurs, including reliable wifi.

Now in its fourth year, this two-day conference is held in the swanky surrounds of the Hofburg Palace. Hailed as a “smarter SXSW for Europe” by Forbes, it’s a dynamic festival more interested in highlighting key developments in areas such as biotech and artificial intelligence, than in the latest smartphone apps.

Limited to 2,500 participants, the festival has been moved from November to May to avoid clashing with the Web Summit. Dirk Alhborn, who heads a company seeking to build a test Hyperloop transport system was the main draw this year, but there were plenty of other attractions.

One was the opportunity to try Soylent, the food substitute that its creators claim can meet our nutritional requirements. Developed by US software engineer Rob Rhinehart, it is designed so each serving provides all the nutrition anyone needs, without sugars, saturated fats and artificial flavourings.

Czech start-up Heaven Labs is selling a version of Soylent called Mana in Europe with a month’s supply costing €184. “People who’ve been trying it seem to be surprised at how tasty it is,” said Jacob Krejcik of Heaven Labs, who set up the company because he wanted to take his own health more seriously.

“My grandparents died from cancer and it got me thinking about what I was putting into my body and I found Soylent. It inspired us to create our own version. Since December, we’ve shipped 4,000 orders and have had more than 50 per cent repeat orders,” said Mr Krejcik.

“From different perspectives, be they transportation, ecology or nutrition, there’s plenty of benefits. Every ingredient included in Mana is certified by a lab so we know it is all good stuff. We don’t use any products that come from animal-based agriculture and factory farming,” he added.

While Mr Garvey flew the flag for Ireland by highlighting how its regulatory model is more supportive of biotech than elsewhere, Mr Gandhi told the audience how it would print its own food in the future using 3D printers.

It will be a few years before cow-free milk becomes a reality but Mr Gandhi stressed the importance of pushing ahead with creating a marketable product. “The one thing that unites us all is to fix the food system. The system we have doesn’t work for anyone,” he said.

While some fitness apps measure how fast we’re moving, Dhananja Jayalath co-founder of Athos has gone one step further by reinventing gym gear. Named by Fast Company as one of the most innovative companies of 2015, Athos is intent on becoming as well-known as Adidas or Nike.

With $3.5 million in backing, the firm started after Mr Jayalath became increasingly frustrated with the quality of his workout routines and so developed a wearable technology that is integrated into gym gear. The sensor-laden clothing tracks your heart rate and monitors muscle groups via electromyography (EMG), and sends the data to your smartphone to ensure you get the ultimate workout.

The clothing doesn’t come cheap with each of item costing $100. Nonetheless, the start-up says it has a backlog of orders. Currently only available in the US, the gear will be on sale in Europe by the end of 2015.

“Products like Fitbit have a lot of validity because they help you get off the couch but we’re more focused on those who are already active,” said Mr Jayalath.

“Our system tells you if you’re only working out at say 60 per cent of your potential. It holds you accountable; if you know you’re slacking off at the gym, you’re more likely to raise your game.”

Robotics was big at this year’s festival and many were keen to see Easton LaChappelle of Unlimited Tomorrow. At 14, he created a $400 3-D printed prosthetic robotic arm after meeting a young girl whose parents had paid $80,000 for a robotic limb for her.

Now aged 19, LaChappelle won over Pioneers by showing off his new open-source innovations on stage which include robot parts worn by humans, who can control the limbs using brainpower alone.

Meanwhile, out among the exhibition stands, the biggest queue was for a virtual-reality sky dive created by the Vienna University of Technology. Wearing an Oculus Rift headset and suspended on ropes, the user experiences skydiving without having to take to the skies.

“Our plan now is to expand on this so you fly over the city and into space. We want to get people to Mars in four minutes,” said Dr Horst Eidenberger, who leads the project.

1 Working from home: New costs, new stresses and little relief
2 We are ‘sale agreed’, but can we go back with a lower offer?
3 Joint accounts: if one of us dies, can the other access the money?
4 HSBC board rethinks overhaul and seeks even deeper cuts
5 Investor alleges fraud over collapse in property fund value
6 Airline stocks take off as coronavirus worries ease
7 DAA offers workers up to two years’ wages in redundancy plan
8 ‘I’ve so many outgoings with family life . . . it puts manners on you’
9 Electrical contractors fear closure under new pay law
10 Fierce debate brews as EU Commission lays out recovery plans
Real news has value SUBSCRIBE