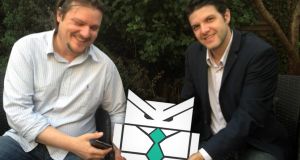 Having only registered the company last January, less than 11 months later Vbot founders Frédéric Herrera, and Bartek Czerwinski found themselves in Turner Broadcasting’s New York offices pitching their corporate video platform to representatives of CNN and the NBA.

One of only nine companies worldwide to be invited to present to the media and sporting giants at an industry event, Herrera, who has lived in Ireland since 2000, says the meetings went well enough that “we’re likely to go back to them in the spring with more developed products and hopefully we’ll have them as pilots”.

Vbot revolves around a way to monetise and control corporate videos for its clients, in which they “flip the YouTube model on its head, where the problem is there are a lot of viewers but not a lot of companies making money out of it”.

Using Vbot’s video platform and tools, brands and corporate giants can control advertising on their videos, gain a return on content views and retain a level of control unheard of when using established online or mobile video hubs.

One of 10 start-ups chosen in September to receive €40,000 and office space for a year in the Telefónica-backed Wayra Academy in O2’s Dublin city centre offices, Herrera tells how “basically our system “ingests video and has an editing and curating interface”.

He continues: “There’s no technology out there that is the equivalent of the corporate YouTube for mobile video, so at the moment the only options for companies or publishers to broadcast for their brand – or to manage their videos for a mobile audience – is to basically build their own system or use YouTube or Facebook videos which are more consumer platforms.”

Instead, he and Czerwinski have “developed a white-label system that can be customised and configured whatever way the company wants to. They can insert premium advertising in the platform, they can control who accesses what and much more.”

Branded version
Features include a “social tagging interface” to increase engagement for companies using the platform with their viewers or clients, as well as a reporting dashboard which allows accurate analytics on views, advertising strength and return on investment for both client and advertisers.

While Vbot is the platform around which all this is based, the company is building applications to run on top of that to meet any video needs. Already available is a mobile video recording application, with a “social video player” that works across “web browsers and mobile devices” being launched in late January.

While Herrera acknowledges there are rivals looking to break into this particular marketplace as well, he says the key advantage for Vbot is that tools on offer from the company can be “configured pretty easily” to meet even the most ambitious company needs.

“Let’s say that a company wants to develop an equivalent of the RTÉ Player, it would usually take two months to do so,” he says. “We have the host solution that allows them to have a branded version of this type of product within a matter of days, all branded and all compliant with advertising needs, a video engagement platform that can monetise videos very quickly.”

Making money
In terms of how the company makes money itself, Herrera explains that “we licence our software and then also, depending on the nature of the client, we might do a revenue split on advertising”.

Czerwinski’s background is in “developing web-based applications and mobile applications”, while Herrera has worked in “mobile video and digital video archiving” for a number of years, having previously worked with academics to help commercialise research projects. The pair now have a staff of six full-time employees and two part-time workers.

Looking ahead towards the spring meetings in the US, Herrera says that thus far the investment from Telefónica has been “important because it really helps push us internationally”.

He adds that Vbot hopes to confirm another injection of funds next month “comparable to the Telefónica investment”, which will be earmarked for continued development in international markets.