Unite calls for national minimum wage to be increased by €1 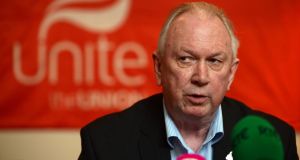 Unite regional secretary Jimmy Kelly said: “Not only does Ireland now have a low-pay crisis – we also have a widening gap between wages at the bottom, which are falling, and those at the top which are rising.” Photograph: Cyril Byrne

The national minimum wage should be increased by €1 to €9.65, the trade union Unite has urged.

It said an increase in the national minimum wage should form part of a “wage-recovery package” of measures which it said would be aimed at addressing a crisis of low pay.

Unite regional secretary Jimmy Kelly said: “Not only does Ireland now have a low-pay crisis – we also have a widening gap between wages at the bottom, which are falling, and those at the top which are rising.

“What wage growth is happening is confined to higher-income groups.This inequality gap is bad for the workers concerned, bad for society and bad for the economy.”

Unite said a wage-recovery package should include increasing the national minimum wage by €1, strengthening and extending joint labour committees which determine minimum pay and conditions in a number of specific sectors, and introducing comprehensive labour rights legislation to bring Ireland into line other EU members.

“Such legislation would implement the EU directive on part-time working, enabling workers to take up extra hours; end exploitative low-hours contracts; and put overtime pay and collective bargaining rights on a statutory footing.”

The Government’s new Low Pay Commission is expect to report back in the summer with recommendations on the national minimum wage.

Employers’ groups have opposed any increase in the national minimum wage rate, while trade unions have argued it should be raised.