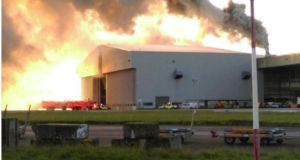 Airport inferno? No, just sunrise behind the hangar near where a Congo Airways aircraft is impounded

The government of the Democratic Republic of Congo (DRC) must be cursing the Irish judicial system.

The High Court has, in the past week, granted yet another interim injunction to impound at Dublin airport an aircraft belonging to the the African state’s putative new airline, Congo Airways. This time, the court has sided with a notorious so-called US “vulture fund” that specialises in squeezing repayment of distressed sovereign debts. It was widely reported last month that Miminco, a US-owned mining company claiming to be owed $11.5 million (€10.3 million) by the DRC government, was the first to obtain such an injunction in Dublin.

The Congolese aircraft was at a Dublin airport hangar to be resprayed by Eirtech Aviation for the launch last month of the new airline, which was to have been a symbol of the country’s future as it emerges from a deeply troubled past.

Congo Airways only owns two of the Airbus A320 aircraft, so the clamping of half its fleet means its launch has hit the buffers. The airline is state-owned, and Miminco plans to appoint a receiver to sell the aircraft to repay the alleged debt, which the DRC government disputes.

Now, High Court records show that a company controlled by Peter Grossman, a former Morgan Stanley consultant, who claims to be owed more than $100 million (€89.8 million) in DRC sovereign debt, has copied Miminco and also impounded the plane.

The debt originated from a loan of about $3 million (€2.7 million) that DRC originally owed the old Yugoslav government. It was bought by Grossman’s FG Hemisphere Associates, which has been chasing it in courts around the world since 2003. Grossman, who allegedly bought the debt in a deal brokered by an investor nicknamed “Goldfinger”, was the subject of a major Guardian exposé four years ago on his attempts to make the DRC pay up.

He has always denied his firm is a “vulture fund” and claims he is chasing a “legitimate debt”. He told The Irish Times this week that he wants to settle the matter “amicably” with the DRC.

“Any such settlement will . . . incorporate very significant debt relief for the country,” said the investor, who didn’t sound at all like he was picking bits of carrion from his beak – sure he didn’t?

In the meantime, the Congolese aircraft sits on an apron at Dublin airport. Proving that the gods might be against the Congo Airways launch, it also escaped a small fire at Eirtech’s hangar last month.

Dublin Fire Brigade tweeted a picture of the “fire”, in which it appeared to be a blazing inferno. National and international media, including the Irish Times, picked up the picture thinking this to be the case.

We have since established, however, that the terrifying glow in the picture is, in fact, merely the morning sunrise coming up behind the hangar. The fire really wasn’t that big at all.

1 How much state pension will I get next year?
2 Oxford Covid vaccine trials offer hope for elderly
3 Ulster Bank to introduce new card payment controls on app
4 RTÉ to seek 70 voluntary redundancies as ‘large costs’ beckon in 2021
5 How long can Government afford to keep State pension age at 66?
6 Investors unnerved by Brexit, Covid-19 and US election jitters
7 The baroness with grande distribution in her blood
8 Apple planning updates to its AirPods earbuds next year
9 Policy failed us during the banking crisis and it’s failing us again
10 Death of Samsung chairman sparks hopes for shake-up
Real news has value SUBSCRIBE