US could license Norwegian Air to fly to Boston within weeks 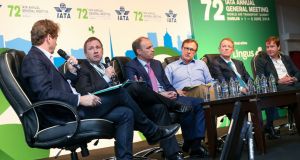 Washington could license Irish-based Norwegian Air International to fly to the US within weeks, paving the way for services connecting Cork and Shannon with Boston.

Norwegian Air wants to launch a low-cost transatlantic service connecting Europe with North America, using its Irish-registered and regulated subsidiary, but faces opposition from US unions and airlines.

Eamonn Brennan, chief executive of the Irish Aviation Authority (IAA), said yesterday that he believed the US department of transportation would grant Norwegian a foreign carrier’s permit within weeks, which would allow the airline to begin planned flights from Cork and Shannon airports to Boston.

The department recently announced that it had “tentatively” agreed to give Norwegian its permit, but sought final submissions from interested parties before making a final decision.

Claims by US unions and rival airlines that Norwegian is using the Republic as a flag of convenience to hire crew on low wages have delayed a department of transportation decision on the permit by two years.

EU officials will shortly meet with federal government representatives in Washington to press the airline’s case. As Norwegian Air International is registered in the Republic and employs a substantial number of people at its Dublin Airport base, it should be entitled to the permit under EU-US aviation treaties.

The IAA has dismissed the flag of convenience claims as untrue in two submissions to the department of transportation. Speaking as the International Air Transport Association opened its annual conference in Dublin, Mr Brennan said that Norwegian’s opponents chiefly feared competition.

“This is a new business model; they are trying to bring the Ryanair approach to long-haul,” he said. “They are encountering huge opposition to this change from airlines, supported by labour unions, in the US.

“Norwegian is regulated, it will be flying brand new American-made 787s and it is going to run a very legitimate operation.”

The IAA is responsible for regulating Norwegian Air International as it is registered in the Republic. It also oversees Ryanair, one of the world’s biggest airlines, with a fleet of 350 craft.

Aer Lingus chief executive, Stephen Kavanagh, also voiced his support for Norwegian’s bid, even though both airlines are set to be rivals if the Scandinavian-owned group gets its US permit.

He said that the Irish airline was already the lowest cost operator on the Atlantic, and added that he would question the motives of some of those opposing Norwegian’s permit.