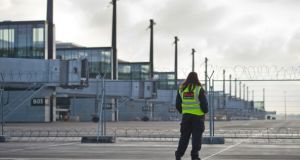 Berlin Brandenburg Airport, in construction since 2006 is now considered a €6.6bn running joke

Berlin’s cursed international airport is almost six years late, and, according to a leading Lufthansa executive, will probably never open.

Thorsten Dirks, a Lufthansa board member and head of its EuroWings budget subsidiary, told a closed-door event in Bavaria: “My prognosis: the thing will be torn down and built anew.”

Berlin Brandenburg Airport (BER) was set to open in 2012 until final safety checks revealed that the smoke extractor system was defective and, in case of fire, risked exploding. With no safety certificate the opening was cancelled at the last minute. Subsequent checks revealed much of the airport had not been built according to the blueprints.

Some 90km of cabling was defective, often sunk in concrete instead of running through shafts. Electric doors had no electricity; no one knew how to turn off the lights; the floors in the car park, even without cars, began to sag because they didn’t contain enough steel girders. The escalator was too short into the underground train station, where – every night – a train passes through to circulate the air and prevent mould.

Last week the airport, in construction since 2006 but now a €6.6 billion running joke, announced it was replacing information screens in the never-used airport – because they have reached the end of their technical life.

That prompted the remark by Mr Dirks, and sparked a testy reply from the Berlin city government as well as the airport planning team.

“This is nonsense,” said Engelbert Lütke Daldrup, head of the new airport. “Instead of getting involved with BER from the outside, a worthwhile task for the national airline would be organise more long distance routes from the capital.”

That was a dig at news that Lufthansa, yet again, is cancelling its direct Berlin-New York route.

Many in Berlin have praised Mr Dirks for expressing what many have said privately for years: the airport, built by a public consortium of two federal states and Germany’s federal government, is the world’s most expensive white elephant.

Even before it opens the original terminal is too small to handle rising traffic. And the entire Lufthansa desks have to be remodelled now that the German national airline has a new logo.

1 Passengers face queuing in car parks at Dublin Airport
2 Major credit union plans to limit savings accounts to €40,000
3 Brother is dragging his heels as executor of uncle’s will - is there anything I can do?
4 Penneys will not reopen on Monday despite expected changes to lockdown rules
5 Trinity Biotech expects Covid-19 immunity test to be authorised shortly
6 Land dispute between Citywest Hotel owner and neighbours before court
7 Stocktake: Has Warren Buffett lost the magic touch?
8 Biopharma company founder named EY World Entrepreneur of the Year
9 Global stocks: what’s cheap and what’s not?
10 ‘I have a talent for justifying purchases’
Real news has value SUBSCRIBE